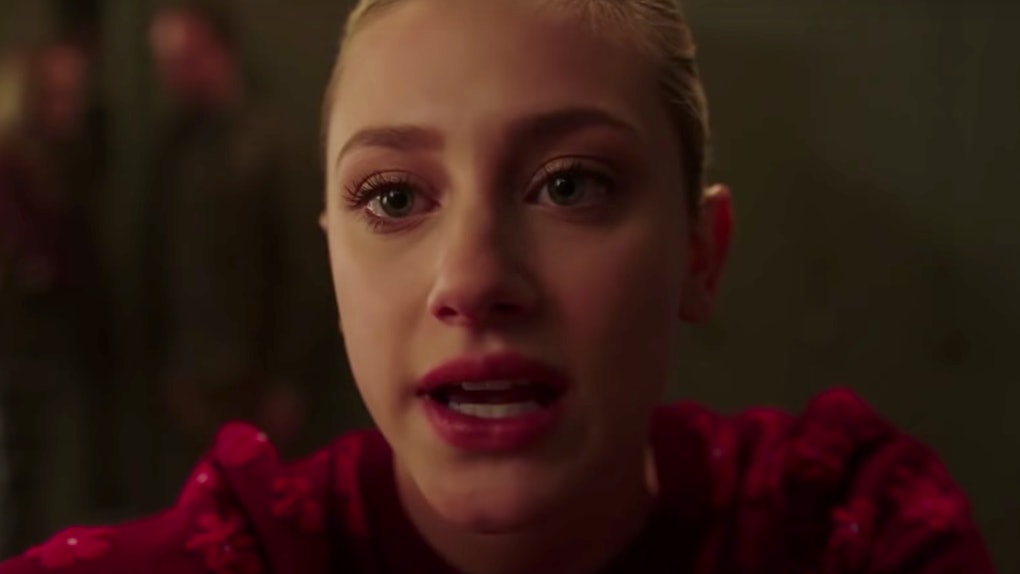 Now that Betty has finally come face to face with the Farm's mysterious leader Edgar Evernever, she is closer than ever to getting the truth about the cult that tore her family apart. But will she have to sink to scary new lows in order to truly take down the Farm? The Riverdale Season 3 Episode 18 promo teases the return of Betty's ruthless, killer behavior, and has fans wondering if her alter-ego Dark Betty will be making a comeback.

Spoiler alert: This post contains plot details from Riverdale Season 3 Episode 17, "The Raid." After nearly an entire season of waiting, Riverdale fans finally got to meet Edgar Evernever in this week's new episode, following his brief wordless introduction at the end of last week's musical. And as predicted, Edgar is super creepy and also super charming — even charming enough to convince the headstrong Cheryl Blossom into joining the Farm. Although things are looking grim for Cheryl, at least her conversion revealed the strange, inexplicable power that Edgar has over his Farm followers: He can somehow allow them to speak with dead loved ones.

The specifics of Edgar's power is still very much in question: Can he bring the dead back to life? Is it more of a seance or ghostly vibe? And, of course, how is he really doing this — are Fizzle Rocks involved? Whatever is going on, at least now Betty has an understanding of why all these people are choosing to stay at the Farm, including her mother who admits that Edgar lets her speak to her dead son Charles Smith. This puts Betty's motivation to figure out the Farm into overdrive, and as shown in the teaser trailer for the next new episode, she is ready to go to any length to take down the cult. The promo shows Betty pinning Evelyn Evernever against the school lockers and seething "I will kill you." Like father, like daughter, huh!?

Check out the promo trailer for the upcoming episode "Jawbreaker" below:

Betty's murderous threat has some fans wondering if her alter-ego Dark Betty will be making a return, even though Betty explicitly threw away that black wig last season. Still, it definitely looks like Betty will be embracing the killer inclinations that drove her to nearly drown Chuck Clayton in Season 1 and that her serial killer father was so sure she had inherited from him in Season 2.

The promo trailer also provides more details about what is going on with the rest of the Core Four. Jughead is teaming up with his dad to investigate the most recent Gargoyle King murder of Baby Teeth and also they also manage to arrest Kurtz. Meanwhile, Archie is back in the boxing ring again fighting in honor of Baby Teeth memory in a rematch against Randy Ronson, and there is also a quick shot that reveals Archie's attempted murderer Ricky DeSantos is back. We also see Veronica getting close to Archie to tell him she'll always be in his corner, suggesting they might be rekindling their romance.

More like this
This 'The Handmaid’s Tale' Season 4, Episode 5 Promo Shows June In Chicago
By Ani Bundel
The 'Cruel Summer' Season 1, Episode 6 Promo Will Make You Question Jeanette
By Rachel Varina
The 'Grey's Anatomy' Season 17, Episode 15 Promo Is A Farewell To Jackson
By Abby Monteil
Stay up to date