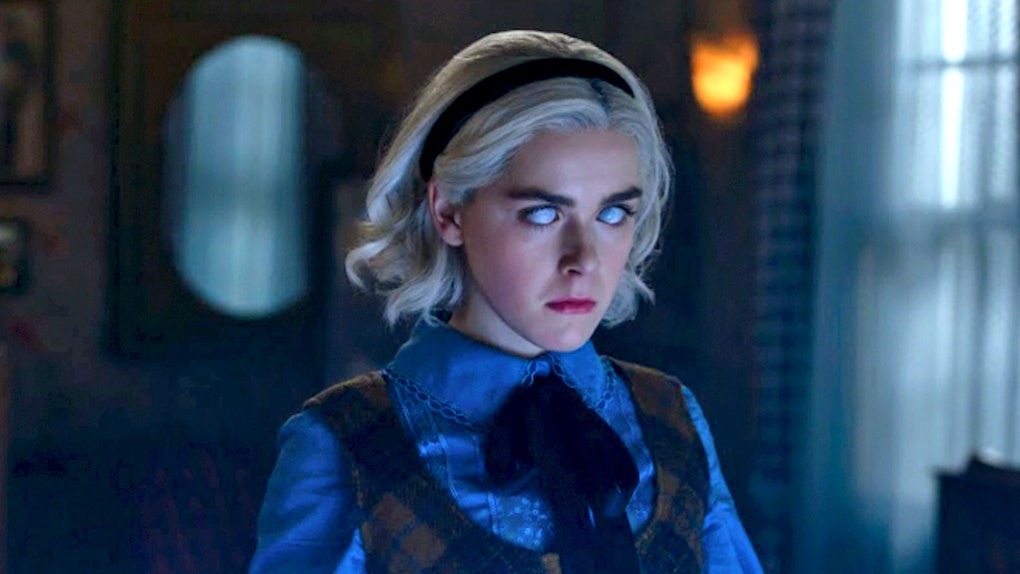 Chilling Adventures of Sabrina just dropped nine new episodes on Netflix a couple days ago, so naturally, every superfan of the satanic teen drama has already devoured every last second. But even nine hours of new Sabrina adventures was not enough, especially when the latest season ended with so many cliffhangers. Now, all the fans are eagerly awaiting what might happen in the next season, and the Chilling Adventures of Sabrina Part 3 theories provide a really good prediction of what might happen next... along with some wishful thinking about potential twists along the way.

Spoiler alert: This post contains spoilers for the season finale of Chilling Adventures of Sabrina Part 2. The second season finale of Chilling Adventures of Sabrina left the characters with a lot of loose ends that can be tied up in the next season. Thankfully, fans can rest assured that more Sabrina is definitely coming to our way in the future, because Netflix has already picked up Parts 3 and 4 of the series. So, just what will Part 3 look like? Here are all the best guesses and theories about next season:

This seems like it will be the main thrust of Part 3, as Sabrina makes it clear in the final moments of Part 2 that she intends to travel to Hell to save her boyfriend Nick Scratch (whom unfortunately got possessed by Satan). This should excite fans for multiple reasons — not only will it be our first glimpse at Chilling Adventures of Sabrina's take on Hell, but Sabrina also sounds intent on bringing her mortal friends with her to help out.

2. Sabrina will search for the Spear of Longinus.

Sabrina, Hilda, Zelda, and Ambrose are unable to kill the newly resurrected Lucifer Morningstar with the blessed daggers that Lilith gave them, but the futile attack was not a total waste. The Dark Lord let slip that the only thing that can kill him is the Spear of Longinus, which is the Holy Lance that was used to pierce Jesus' side while he was crucified in the Bible. If that weapon is the only way to kill Lucifer, then you can bet Sabrina will be trying to track it down.

3. Lilith will face an uprising as the new Queen of Hell.

It seems like Hell is going to be a prominent new setting for Part 3, and while Sabrina and her friends are dealing with the possessed Nick, Lilith might have her own hellish problems. After all, you can't expect every creature of hell to just accept Lilith as their new queen while Lucifer remains trapped in a human prison.

4. Zelda will take the Church of Night in a radical new direction.

With Father Blackwood on the lamb and a large chunk of the Church of Night killed due to his poisoning, Part 2 ends with Zelda taking the reigns as the congregations new High Priestess. While Zelda has definitely grown to see how antiquated and misogynistic Father Blackwood's views were, she is still not exactly the most tolerant witch. Her rule as High Priestess should be a definite improvement, but don't expect her to go easy on anyone.

Ambrose may have been Father Blackwood's Top Boy and Prudence may be his daughter, but the two ended Part 2 with completely different feelings about him. Blackwood framed Ambrose for murder and left Prudence for dead once he got back his twins, and then he fled to who-knows-where as the apocalypse seemed imminent. In their final scene, Ambrose and Prudence team up and set off to hunt down Father Blackwood, intent on killing their former father figure.

6. Hilda and Dr. Cerberus will get married.

I know that they only just started dating, but romance moves so quickly on this show — just look at Zelda and Father Blackwood's quickie wedding. Things seem to be going perfectly between Hilda and Dr. Cerberus (despite that pesky incubus possession), so wedding bells might be ringing in Part 3.

7. Sabrina will discover she has an evil twin.

OK, this is definitely the biggest stretch, but it is not an improbable theory at all. Fans of the original Sabrina the Teenage Witch know that the Spellman family secret is that every member of the family has an evil twin, and interestingly enough, Sabrina's sister show Riverdale is also packed with twins. We have also seen a clip of Sabrina as a newborn a couple times, both in Part 1 and Part 2, that show Sabrina next to another baby who has goat-like feet. Could this all be adding up to an evil twin reveal, whom Sabrina will encounter when she enters Hell? That would certainly be the biggest twist of the season, if it turns out to be true.