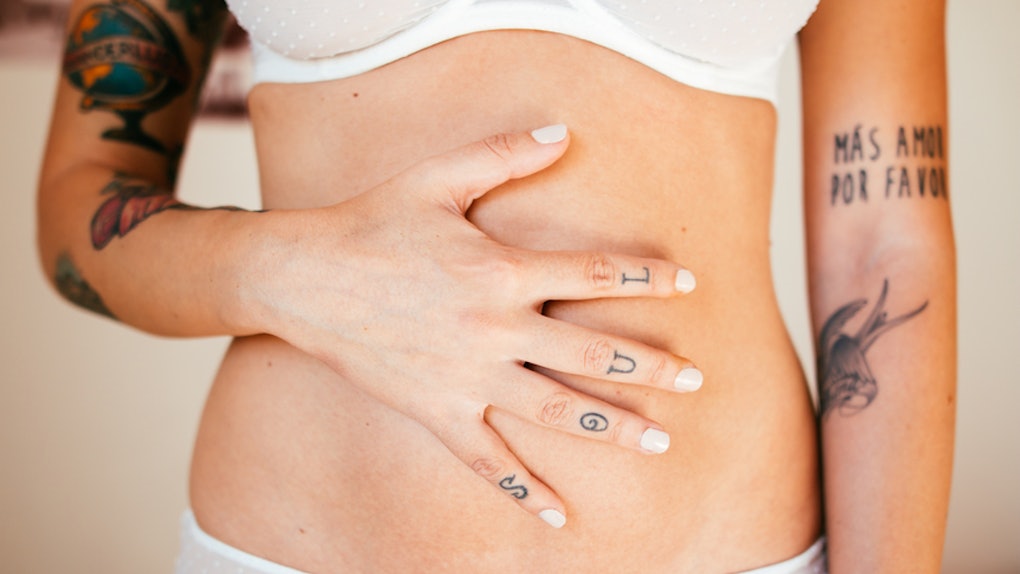 6 Pregnancy Vs Period Symptoms That Show The Two Are So Similar, It's Infuriating

Before I got an IUD, I used to be able to spot my period from a mile away. I dealt with mood swings, cravings, cramps, and more, and each time one of the symptoms happened, I'd know my period was on its way. This isn't exactly a wrong line of thought, except for the fact that, technically, the onset of pregnancy is very similar, symptoms-wise, to your period. In fact, when you're comparing pregnancy vs. period symptoms, you may be surprised to realize you're almost looking at the same exact list.

The idea of actually being pregnant when you just think it's your period, is possibly the scariest plot line any millennial woman can face. And it seems like it's actually a more probable reality than you might have thought, given that most of the symptoms of pregnancy can mask themselves as especially nasty bouts of PMS.

The best way to be sure that your symptoms are period-related is to be meticulous about how and what you're using as a form of contraception. But even contraception isn't 100 percent foolproof all the time, so the best thing you can do is keep a close eye. There's an obvious timeline to this: If you don't get your period, and you continue to have these weird symptoms for weeks on end, it might be time to see a doctor and set the record straight. Here are six pregnancy and period symptoms that are so similar, you might not be able to tell them apart.

Yep, it's true. The misery and pain of cramps will happen both with pregnancy and your menstrual cycle. It's common to feel cramping while pregnant, especially during your first trimester when your uterus is expanding. Barring contractions (which certainly feel worse than normal cramps), you shouldn't feel a marked difference between your menstrual cramps and your pregnancy cramps. If you begin to feel stabbing pains, this might just be from the ligaments around your uterus stretching, but it's always best to see a doctor to be safe.

2. You Have Sore Boobs

Sore boobs are the name of the game with both pregnancy and your menstrual cycle. This is because both of those events are caused by a change in the hormones that regulate your reproductive cycle. Increased estrogen causes the breast ducts to enlarge, which thus makes you a little more sensitive than normal.

The only thing better than swinging from euphoria to a quick PMS-induced sob-fest is having the same thing happen while you're carrying an extra human being inside of you.

Mood changes are common for both pregnancy and cramps, but they can happen more aggressively when you're pregnant — which is a little alarming, since my current mood swings that I get on my period can make my head spin.

One of the more immediate signs of pregnancy is, ironically, spotting. Spotting or light bleeding can occur one or two weeks after conception, which is why some women often mistake it for period spotting.

However, if the spotting is light pink or dark brown, there's a good chance it means your eggo is preggo, so you should check that out ASAP with a doctor to be sure.

Chronic lower back pain is far from uncommon in pregnancy (for immediately obvious reasons, aka all that new weight you're carrying around by your spine), but it's also more common with menstruation than you'd think. Lower back pain during menstruation is associated with the hormonal change that occurs in your body during that time, which gives some added perspective as to why you get a similar sense of soreness during pregnancy, too.

Weird, random food cravings are pretty much a given in most women's lives long before ever getting pregnant, because they're a common symptom of menstruation, as well. This is, again, attributed to the hormonal flood you experience during PMS, as well as during pregnancy, which triggers bodily impulses and desires that can feel less than normal.

Fun fact: I fell in love with anchovies during a PMS-induced binge, and I've been obsessed with them ever since.