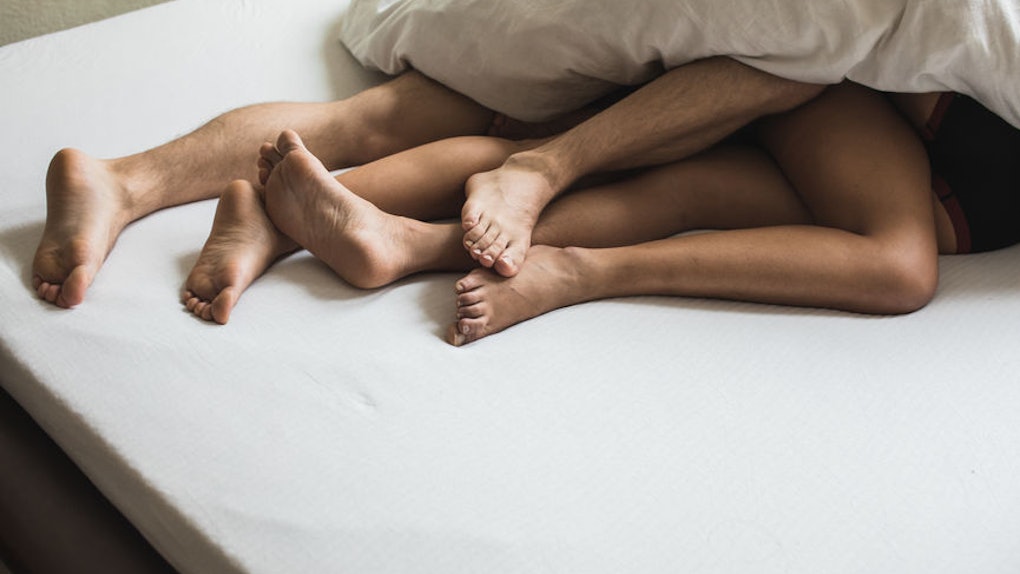 When it comes to sex, everyone has their own personal preferences. Maybe you're a virgin and you want to keep it that way, and that's fine! Maybe you don't want to settle down with just one person, and that's fine, too. Your body means your choice, and however you choose to express your sexuality is fair game. But sometimes, your sexcapades can turn into something that you'd really rather forget, like these stories of when threesomes went wrong, because honestly? That's normal too.

Here are six people revealing how their threesomes went wrong, so buckle up.

To be clear, I'm a girl. I was with my ex and my friend. We all agreed it'd be fun. So, we went to my exes house and watched tv for a while. I started making out with my friend while my ex felt us up. He tried to get under my friend's clothes and she started screaming (and I shit you not) "PEE PEE TOUCHER!". She did it jokingly, but jesus. My ex and I exchanged "wtf" looks but continued on when she stopped. He then tried again. Everything was going well. Until she went fucking weird again. He was about to finger her and she told him "It probably smells like The Great Depression down there." He quickly began to avoid it, understandably.

We were really willing to try again but, by then my friend had gotten caught up in "Christmas With The Kranks" on tv. She "kindly" told my ex he could go ahead, as long as she could watch tv while he did it. I have no idea why she even said yes to us. She's since moved and is with child now.

"Cock blocked by a lock" is a thing, apparently.

I was at the Juno awards in Canada. We had a VIP suite; my parents had purchased it for us.

So I'm having quad gins, and I'm buzzing fast. I ended up meeting this pair of friends, they're very attractive (seeing as this was a VIP gala in the Shangrila hotel downtown) and we hit it off. I end up wandering elsewhere after we chat for a while and I have their numbers.

Now, I don't really remember the rest. There was a theatre room set up with Rock Band and I remember playing that for a while. Apparently I fell into the elevator and was just generally making an arse of myself so my sisters decided to take me home (at the time I lived about 5 blocks away in downtown Vancouver).

So being drunk I decided to invite these girls over. Again, I have no recollection of this. I called them up and according to my sister I was just being a complete douche. I was making noises that made no sense like MRAAHWRHHWH and being rude to them and all sorts of things. Needless to say... this worked. Wait, what?

So these girls are their way over to my apartment and are seemingly DTF. We get into my flat (my siblings and I) and apparently this is what happened next.

tl;dr: Cock blocked by a lock.

Cats can totally kill the mood, y'all.

My housemates sorority gf in college had a mission to help me hook up with one of her sorority sisters. So we have a small party at our apartment and she invites a bunch over. After some drinking games we are all feeling a little buzzed and I get the courage to start talking to these two girls. Things go well and I don't spend all my time talking to them and instead talk to others. After a while I notice the two girls are missing so I ask my housemates gf where they went and she told me that they went upstairs to my room.

I head upstairs and into my room and I see the two girls sitting on my bed talking. I come in and they act glad to see me and start telling me that I have a good taste in clothes and music. Things start going so well that I start getting nervous so I start talking about my cat who was also in the room and how awesome he is and the tricks I taught him. Needless to say things quickly took a 180 and they left the house completely to go to a bar.

The Case Of The Giant Penis

I was pretty intoxicated one night at a party with my girlfriend and another girl with whom we are both friends. The previous night I heard that my girlfriend and this girl had a drunken make out session and I wanted to capitalize on this. So near the end of the party I go upstairs with my girlfriend and the other girl. They proceed to make out for a minute or so and both go down on their knees to take off my pants. I then take out my erect penis and put it in the girls face. She looks at my penis, then looks at me right in my eyes, gets up and runs out. Personally I like to think it was because it was too big.

Just got too drunk. Everyone was having a good time and they made sure to point out that after drinking I could "spend the night," an invitation only extended by the host to my FWB and me.

But all they had to drink was Coors Light. Being a cocktail man I was just pounding them back with wreckless abandon. I lost count at 10, but eventually everyone leaves. As soon as the door closes I turn around to see two bare *ss naked women running out the back door and jumping in the pool. Night is looking up.

Then I jumped in...and forgot to hold my breath. I come crawling out choking on water. About this same time the spins hit. So I go back inside to try to collect myself. It doesn't work. By the time they come in I realize it's going to take 110% to not throw up all over this lady's nice house, nevertheless figure out how to please both of them at the same time. I pass out on the couch with the dog instead.