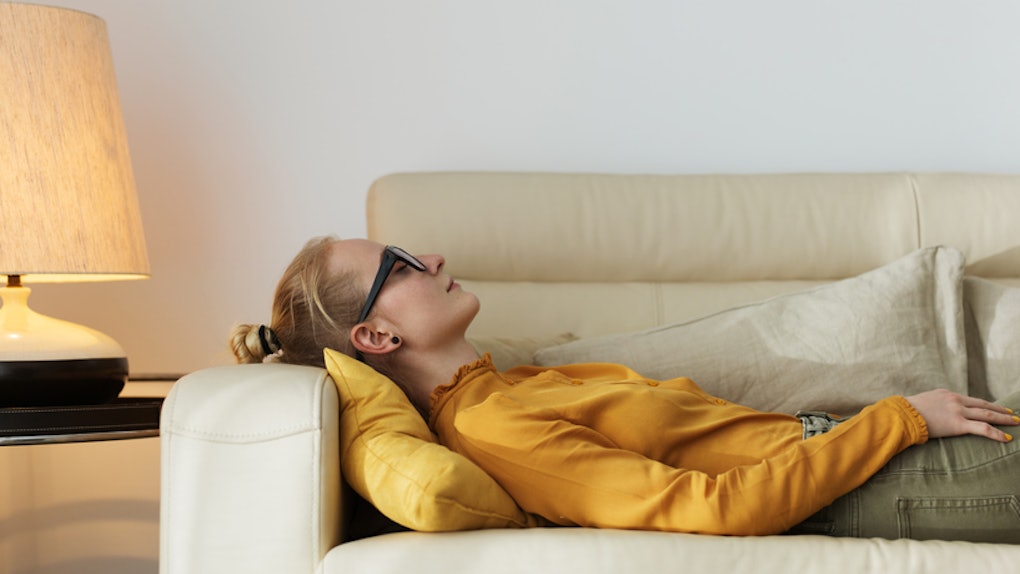 6 Myths About Naps Debunked, So You Can Enjoy Your Afternoon Snooze To The Fullest

I noticed early on in the midst of college life that I must be some sort of rare breed of millennial or something, because I don’t nap. Save the high brows and nose-scrunching, please; I’ve just never been a napper! This could very well be because, once I’m up, I’m up, or maybe it’s because the many myths about naps floating around got inside my brain and never left. I’m not saying naps are bad for you; I’m saying naps just usually aren’t for me, but if you do snooze midday on occasion, or, you know, whenever you can squeeze a few minutes of shut-eye into your schedule, there are a few pseudo-facts that need debunking ASAP, so even non-nappers like myself can get the record straight.

Now, don’t get me wrong. Just because I don’t frequently take naps doesn’t mean I don’t acknowledge the fact that a few extra minutes of sleep during the day doesn’t sound glorious. Doctor of psychology and licensed clinical social worker Dr. Danielle Forshee defines napping for Elite Daily as “a brief moment where you give your mind and body time to rejuvenate.” Now, doesn’t that sound so delicious?

According to Forshee, the act of napping isn’t just satisfying; it can be healthy, too, but there's some conflicting information out there that needs to be addressed. For example, Forshee explains that there are a slew of benefits to napping if you suffer from sleep deprivation, but if you sleep like a baby at night, napping for more than 20 minutes at a time can leave you feeling exhausted and miserable. Do you see the dilemma here?

Unfortunately, there are a handful of napping myths that make it kind of confusing to decipher whether or not you should be taking them in the first place. To clear things up for you, here are a few of the most common fallacies about naps, debunked.

1. You Won't Be Able To Sleep At Night If You Nap During The Day

Now, there is a bit of truth to this myth, so Elite Daily reached out to Chris Brantner, certified sleep science coach and founder of SleepZoo, to help us break it down for you. Essentially, there's something of a "right" and a "wrong" way to nap, and if you go by the latter, there's a high probability that sleeping in the middle of the day will mess with your overall snooze cycle.

According to Brantner, timing is everything when it comes to napping, and this refers to both the time of day you choose to nap, and for how long. Brantner recommends snoozing no later than 2 p.m. For a quick boost, he adds, 15 to 20 minutes is the sweet spot, because you'll wake up somewhere "in the first two stages of lighter sleep."

"If you push it to 30 minutes or an hour, you’ll likely wake up feeling groggy, as you’ll be in the middle of deep sleep," he tells Elite Daily. But if you're aiming for a full recharge, aim for a full 90 minutes so that you can experience "the length of a normal sleep cycle."

Let me tell you something, friends: When you put down your smartphone, close your laptop, and separate yourself from technology, your schedule frees up fast, and by a lot. The time you spend fiddling with this app, and liking that photo could, instead, be spent catching some quality Zs.

Brantner tells Elite Daily that unplugging and attempting to sleep for a bit — say, 15 minutes or so — in between assignments or errands can be super helpful if you need a reboot.

"Even if you can't get to sleep," he adds, "you'll benefit from relaxing and unplugging." Social media makes you miserable half the time anyway; you're better off giving your eyes a rest.

As previously mentioned, I wouldn't consider myself a napper by any means, but just because you don't nap, doesn't mean you can't. In fact, according to Christopher Lindholst, CEO of nap pods company MetroNaps, people who don't nap aren't any less tired than people who do; they just aren't as in tune with their body's cues that tell them they're feeling tired.

So how, then, can people who aren't traditional nappers settle down when their body needs it most, even if they aren't overcome with fatigue? Lindholst told Inc. that using music and guided relaxation can "help clear your mind." What's more, taking off your shoes and putting your feet up "reduces the workload on your cardiac system and makes it easier for your body to relax," Lindholst explained.

4. Naps Are For Kids, Not Adults

From my experience, I'd venture to say that college students nap way more than kids do, and that's coming from someone who worked in daycare for roughly four years. I could very well be exaggerating here, but the facts stand: Napping is not a kids-only club.

According to the Sleep Health Foundation, adults don't necessarily need naps if they get enough sleep at night, but they're definitely beneficial when you experience sleep loss or insomnia. Brantner tells Elite Daily this is because naps "can result in mood alertness, improved mood, and increased productivity." In other words, napping is one childlike behavior you don't want to grow out of.

Consider the mid-afternoon slump, for example; you've been there, I've been there, we've all been there. When 2 p.m. rolls around, it's like you've been hit with a huge wave of fatigue, and soon enough, you're looking for literally any excuse to get up from your desk, like heading to the coffee machine, or snacking on something sweet. These short-term solutions could be swapped for a quick power nap that will enable you to bang out the rest of your workload with ease.

Don't believe me? Dr. Benjamin Smarr, a sleep research expert and National Institutes of Health postdoctoral research fellow at the University of California, Berkeley, told Forbes that taking a much-needed nap during an afternoon slump can help you "internalize conversations, retain memories, and think through difficult problems" much more effectively than any cup of coffee will. In other words, maybe nix the caffeine and opt for a fluffy pillow instead.

6. Napping Will Make You Feel Even More Exhausted

Personally, every time I've even attempted to nap, I wake up feeling like crap afterward. However, that icky, groggy feeling is avoidable; it all goes back to timing. As Brantner points out, how long you nap is everything. So while, yes, napping for too long can definitely make you feel crummy, it can also make you feel like a million bucks.

Prevention reports that when you sleep, your brain "produces different kinds of waves" that correspond with your sleep phases. Clocking in about 20 minutes of snooze time is just enough, according to Prevention, because that's just before your brain moves into "slow wave sleep," aka the deepest phase of sleep, that causes you to feel discombobulated if you wake up in the middle of it.

Napping is, clearly, an art to master, and you know what they say about practice makes perfect. Fluff your pillow, set your timer, and snooze away, friend.