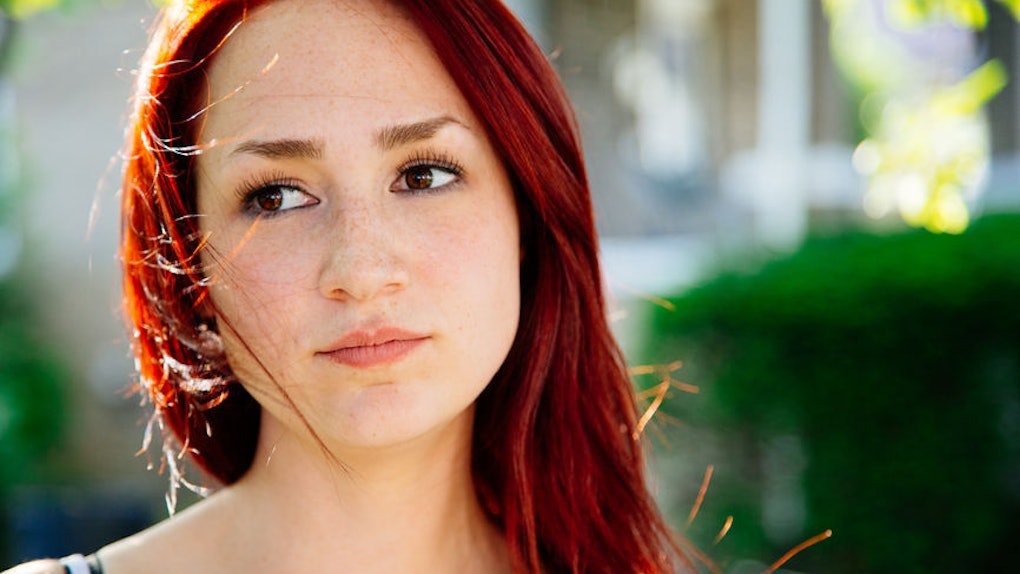 Do you ever feel like your brain has reached its metaphorical boiling point and is about to bubble over in rage? Same, friend. All the time. And the fact of the matter is, I'm willing to bet your anger, regardless of what sparked the emotion, is totally and 100 percent justified. But it's easy to forget that anger can actually be a really valuable feeling, one that can teach you a lot about yourself and how to handle difficult situations. As long as you have healthy ways to express your anger, rather than suppress it, these difficult emotions really can serve a higher, more meaningful purpose.

The thing is, suppressing angry emotions doesn't just feel terrible; it's been scientifically shown that doing so is downright bad for your wellbeing. For example, a study published in The Journal of Psychosomatic Research, the official medical journal of the European Association of Psychosomatic Medicine, followed over 700 people between 1996 and 2008, and found that, on the whole, bottling up certain emotions, including anger, may be associated with an increased "risk for earlier death," the study authors wrote.

"Anger often gets a bad rap in our society because of the highly publicized and dangerous ways that some people express it (mass shootings, harassment, etc.)," Becky Howie, MA, a psychotherapist and coach at NatureWise Counseling, LLC, tells Elite Daily over email. "But anger, in and of itself, is a perfectly healthy — and actually quite useful — emotion."

According to Howie, anger can sometimes be a cover of sorts for other emotions. For example, she explains, men are often encouraged not to show fear or sadness, so these suppressed emotions can sometimes bubble to the surface as anger, instead. But more often than not, the psychotherapist tells Elite Daily, anger tells you when a boundary is being crossed. "Either we are getting too much of something we don’t want or need (someone yelling at us, touching us inappropriately), or not enough of something we do want or need (respect, compensation, love, etc.)," Howie says.

In these moments of anger, if you're mindful of what boundary is being crossed, Howie says it can give you valuable information about how to rectify the situation and find your way back to a centered state of being.

Keeping all of this in mind, it's important to be intentional about your anger, rather than saying or doing things you may later regret. Here are six healthy ways to process your anger that will allow you to express yourself mindfully and without restraint.

Address An Issue Immediately Before It Escalates

If you're in a situation where you're angry with someone who's standing right in front of you or whom you're talking to over the phone, relationship psychiatrist Laura Dabney, M.D. suggests asking directly and calmly for what you need so that you'll be able to convey that you're not OK with how this person is behaving and/or what they are saying.

Dabney suggests phrases like, “I need to change the subject,” or “I need to take a break from this conversation,” or “I will need to leave if you say that again.”

After you've done that, try Dabney's second suggestion, below.

"Simply leave the room and return after you’ve had a chance to breathe and process the angry feelings," the relationship psychiatrist suggests. Usually, she tells Elite Daily over email, 20 minutes is enough to calm down and return to the conversation feeling a bit refreshed.

Dr. Eugene Charles, director of The Applied Kinesiology Center of New York, tells me that a simple exercise — one that he says he's given to thousands of patients looking for a healthy outlet for their anger — is the 1,500-year-old Qigong breathing method.

"You take in a deep breath, pause for three seconds, and then blow out while enunciating the sound: SSHHHHHHH," Dr. Charles tells Elite Daily. He recommends doing this as much as 30 times in a row when you feel a sense of rage bubbling up inside of you.

According to Dr. Charles, this breathing technique can help convert anger into more positive emotions. "[The technique] seems to help my patients 'blow off some steam' in a healthy way," he explains.

Try Getting In Some Rigorous Exercise

"Any exercise basically releases the excess energy that you may be feeling that's all pent up," Rachel Gersten, a therapist and health/wellness coach based in New York City, tells Elite Daily over email.

Plus, Gersten adds, when you exercise, your body releases endorphins, which can also help to lift a negative mood.

Journaling Can Be Another Great Way To Process Anger

Writing out your feelings can be very helpful in working through them, says Gersten (and personally, I can say it really does work wonders).

"Overall, suppressing anger isn't healthy, as emotions need to be felt/dealt with in order to be processed and allow the person to move on," Gersten tells Elite Daily.

Ultimately, you can't get past what you don't actually acknowledge and deal with, so try journaling about what triggers your anger so you can consciously recognize that these feelings are completely valid.

Developing a regular meditation practice can be a huge game-changer when it comes to making peace with your feelings.

Tamsin Astor, Ph.D., a certified yoga health coach who's also trained in psychology and neuroscience,​ recommends a loving kindness meditation, in which you sit quietly and visualize a person you love, then a person who is neutral, and finally the person who's making you feel angry. "To each person," Astor tells Elite Daily, "say: may you be happy; may you be healthy; may you be safe; may you be at ease."