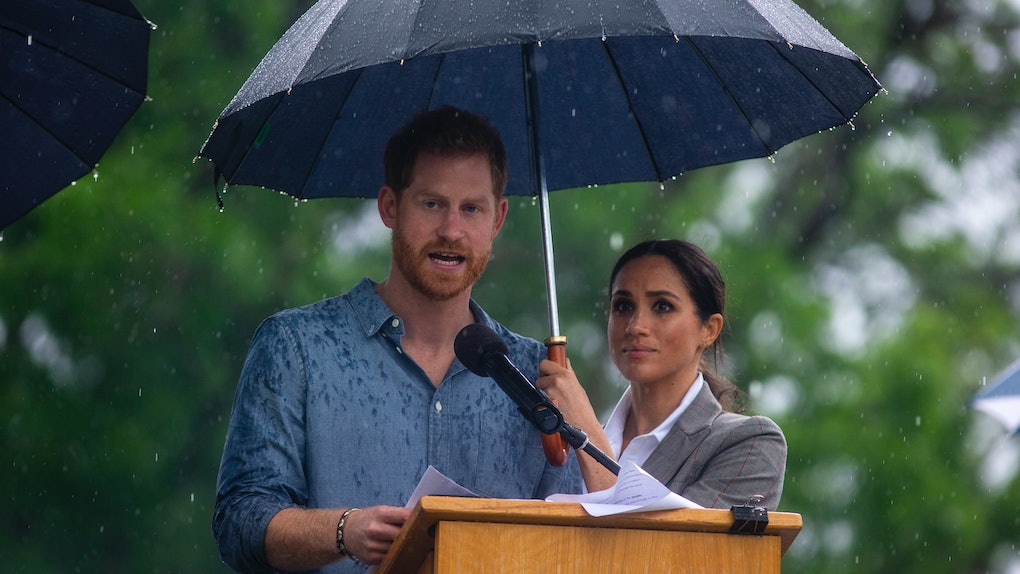 Even before their whirlwind romance bloomed into a royal marriage and soon-to-be family of three, Prince Harry and Meghan Markle became a power couple with a very real platform at their disposal. To this day, all eyes follow the Duke and Duchess of Sussex, and I think they’re both fully aware of the opportunity they have to make a significant impact on the world. For example, Prince Harry has shown his support for mental health awareness time and again by joining campaigns, fore-fronting the royal Heads Together initiative, and opening up about his own experiences with such raw emotions, particularly after the passing of his mother, Princess Diana.

In this mixed up world full of chaos and stigma surrounding mental health issues that, BTW, everyone goes through at some point or another, it’s always humbling to know you're not alone in these hardships. But having an icon like Prince Harry — a member of the royal family who generally presents himself as totally put-together — come out and say he's been there, too, can be even more comforting. I know myself, and I've definitely (foolishly) assumed that celebrities, and people who find themselves in a position of power, are somewhat immune to the everyday mental health struggles you and I might experience daily.

But the truth is, no one gets a pass. Anyone with an active mind and a beating heart is subject to an internal conflict of some sort, if not for any reason other than the fact that you're human, and you have the ability to feel emotions. According to the World Health Organization (WHO), one in every four people will experience some kind of mental health issue or neurological disorder at least once in their lifetime.

When you think about it that way, we really are all in this together — and that's exactly the message Prince Harry wants to communicate when it comes to mental health.

When He Encouraged Anyone Struggling To Seek The Help They Need

Per the WHO, about two-thirds of those struggling with mental health issues do not reach out for professional help, due to the "stigma, discrimination and neglect" they often feel. During a speech Prince Harry delivered in Dubbo, Australia while on tour with Duchess of Sussex, Meghan Markle, the Duke encouraged the crowd to show courage, and to reach out to loved ones and professionals who can help you through the healing process. He told the crowd,

You need to know that part of being strong and tough is having the courage to seek help when you need it. You must not silently suffer. You are all in this together.

And, if I may speak personally, we are all in this together. Because asking for help was one of the best decisions that I ever made. You will be continually amazed at how life changes for the better.

Once you feel comfortable with and open to the idea of talking to someone about what you're going through, the next step is to find someone you can open up to without any hesitation or fear of judgment. I know myself, and I talked to a few different therapists before finding the right one whom I felt I could share things and be candid with.

Apparently, Prince Harry can totally relate. According to The Guardian, he and Meghan Markle recently joined a private "anti bad vibes circle" hosted by OneWave, a local surfing community in Bondi, Australia that's dedicated to raising awareness for mental health. During the conversation, Prince Harry reportedly admitted that it might take a few tries before you find a therapist you truly click with — but the key, he reportedly said, is to keep trying. In an exclusive interview with The Guardian, one of the members of OneWave, Charlotte Connell, recalled,

When He Talked About The Mental Health Benefits Of Exercise

As reported by The Telegraph, in an exclusive interview with English journalist, Bryony Gordon, during the first episode of her podcast Mad World, Prince Harry said there was a time when his mental health struggles made him so angry, he felt as though he were "on the verge of punching someone." Instead of getting violent, though, the Duke of Sussex told Gordon, he took his battle to the boxing ring. He explained,

During those years I took up boxing, because everyone was saying boxing is good for you and it’s a really good way of letting out aggression. And that really saved me because I was on the verge of punching someone, so being able to punch someone who had pads was certainly easier.

When He Founded The Royal Heads Together Initiative

In 2016, Prince Harry, Prince William, and Kate Middleton (the Duchess of Cambridge) founded the Heads Together initiative to do their part in combating the stigma surrounding mental health, according to ABC News. In 2018, the new Duchess of Sussex, Meghan Markle, joined the ranks, and as per Newport Academy, she was eager to "hit the ground running" and get involved with the campaign.

According to the Royal Foundation, Heads Together has teamed up with organizations like Place2Be, Mind, The Campaign Against Living Miserably (CALM), and more to "change the national conversation on mental wellbeing" by offering resources and striking up a positive, more hopeful conversation surrounding mental health.

When He Supported Veterans Struggling With Mental Health

Prince Harry served in the British military for 10 years, according to the royal family's official website. During his military career, he was promoted to the rank of Captain, and he fought in Afghanistan twice. So, naturally, Prince Harry has always been a strong supporter of those who fight for their country.

What's more, the 34-year-old Duke of Sussex seems to understand that, while soldiers certainly suffer physical wounds, some are also battling with invisible scars, too. As a way to help those currently serving, as well as those who have served their country in the past, Prince Harry teamed up with The Campaign to Change Direction, an initiative that helps loved ones of military service members to first identify the five signs of emotional suffering, and to then provide the necessary resources to aid in their recovery.

More like this
HomeGoods' Hideout Contest Treats You To A Relaxing Solo Getaway & Free Merch
By Marisa Casciano
Your Favorite Way To Escape From Reality, As Told By Your Moon Sign
By Roya Backlund
Can I Exercise After A Flu Shot? Experts Recommend Listening To Your Body Post Vaccine
By Georgina Berbari
Stay up to date