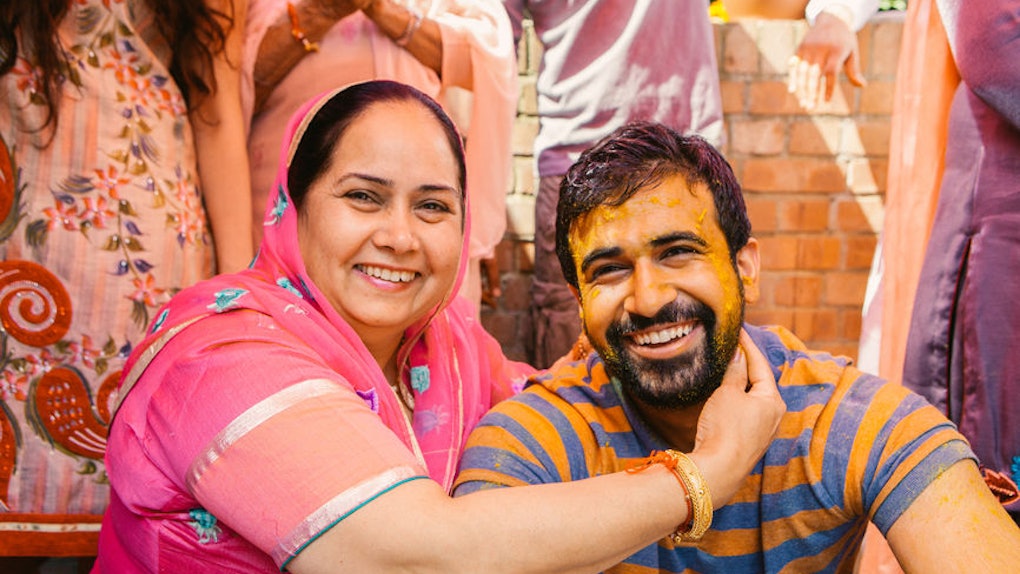 5 Sweet Ways Moms & Boyfriends Or Girlfriends Have Gotten Along & Bonded

I knew I really loved my last boyfriend the second I saw him wrap his (incredibly buff) arms around my mom at a time when she truly needed it. Without diving into all of the drama and hardships that had led up to that moment, my mom had had a really rough day, and my boyfriend made it his priority to comfort her in any way he could. It was completely heartwarming. Because honestly, is there anything sweeter than seeing moms and boyfriends or girlfriends getting along and building a connection that stretches beyond social niceties? No, no there is not.

Hopefully, your SO will never have to wipe away your mom's tears (it'll only induce more waterworks, trust me), but that doesn't mean they can't, and haven't, bonded in other adorable ways. Whether your partner shows an interest in your mother's interests, makes an effort to learn her native language, or the two of them join forces to take care of you in a moment when you need it most, there's really nothing lovelier.

Here are five ways that different women's boyfriends and girlfriends have clicked and connected with their mom. And uh, fair warning: You may want to break out the tissues for a few of these.

My mom met my boyfriend for the first time over dinner at my apartment. I went to the bathroom and could hear them suddenly whispering together. When I got back to the table, they pretended like everything was normal and denied whispering. A few weeks later, on my birthday, I discovered they had been planning a surprise together for me. My family has never been that really into big gifts or surprises for birthdays, so I was really touched that my mom went along with his planning from the get-go.

What better place to bond than in the kitchen?

My last boyfriend loved to cook. He was American and I and my family are Trinidadian. As a birthday present, my mom gave him a Trinidadian cookbook and spent hours teaching him how to make his favorite recipes. She even took him grocery shopping when he visited my family so he could stock up on local spices before going back home to Florida.

Hospital rooms are another great place to bond.

My mom and my partner were actually forced to bond pretty quickly. Back in October 2017, I ended up having to have my gallbladder removed. I knew the surgery was coming, and my parents wanted to fly in to be with me because they were worried. A sudden gallbladder attack sent me to the ER and subsequently into surgery earlier than expected, meaning my parents weren't able to make it in time. Since they weren't able to make it, my girlfriend Katie, whom I had just started ~officially~ dating at the time, came to be with me in the hospital. She stayed through my surgery and even stayed once my parents got there. I ended up having to have a second procedure that same day, so my mom and Katie bonded over their mutual worries about me being in the hospital while I was unconscious.

If your SO hangs out with your mom even when you're not around, he's a keeper.

My now-husband and I started dating at the end of our senior year of high school, and — though he later transferred colleges — we were apart for several months at the start of our relationship. He'd initially chosen to go to an in-state school (I'd gone to school a few states away in Boston), and he would regularly head to my house and hang out with my mom and my younger sisters when I wasn't around. They all just liked hanging out together, and I loved hearing that he'd gone over to eat dinner and watch Friends with them. He fit with my family so nicely, which was really important to me.

Same goes if they make an effort to learn your mom's native language (*swoon*).

My mom's side of the family is from Venezuela, and while they all speak English, they're way more comfortable speaking Spanish. Anyway, my boyfriend had met my mom on a few different occasions and they'd gotten along nicely, but he came over on her birthday one year, and had written a really sweet card to her entirely in Spanish. He'd gotten a few Spanish-speaking friends to help him out, and had even been taking online lessons so he could learn to better communicate with that side of my family. The birthday card was essentially thanking her for being such an incredible woman and raising an incredible woman (me!) and it was just so crazy thoughtful, tears came to her eyes and mine. I'd been in love for a while, but I think this was the moment my mom really fell in love with him, too.

There's just something in my eye, guys — I'm definitely not crying over here.

*Quotes have been edited and condensed for clarity.