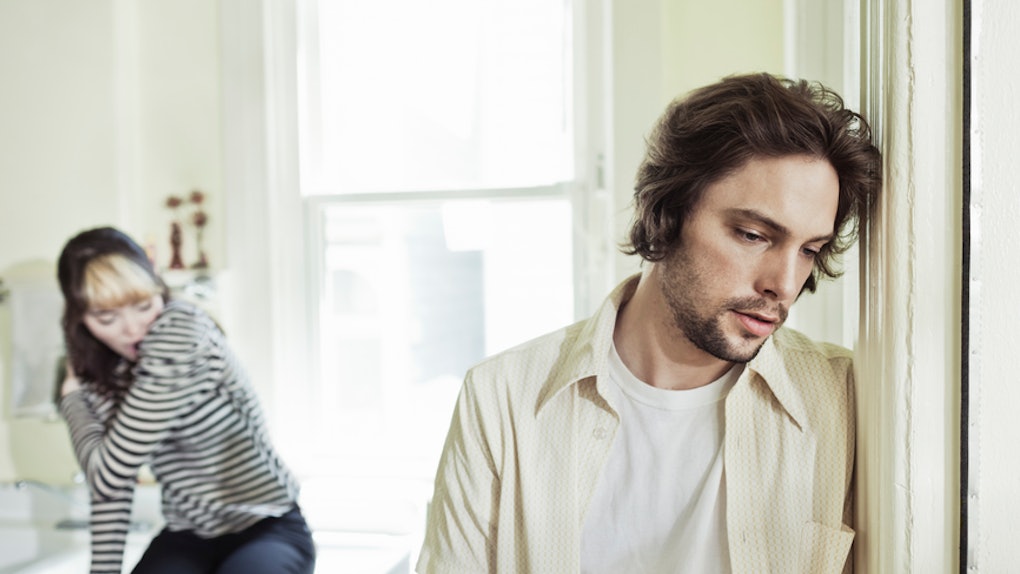 5 Signs Your Relationship Needs Work, According To A Couples' Therapist

Imagine having access to a PDF version of the roadmap to relationship success. I don't mean figuratively. I mean like an actual map with must-see destinations highlighted in bold and warning signs about detours and hazardous conditions up ahead. What would the warning signs say? Well, essentially they would be signs your relationship needs work like, "Danger! Major partner mood swing at the next intersection," or, "Warning! Incoming ex. Proceed with caution." It would make dating so much easier.

Sadly, no such thing exists. And if it does, I haven't been able to find it in the App Store. Luckily, when in doubt, you can turn to experts like Dr. Fran Walfish, Beverly Hills family and relationship psychotherapist and co-star on Sex Box.

Dr. Walfish defines relationship warning signs as anything in a relationship that presents a high risk for serious problems in the near future, including the possible demise of the relationship. The most common and dangerous ones, she says, all have to do with communication.

"Healthy relationships require two willing participants who have the courage to face their own shortcomings and to be held accountable," she explains. Most other relationship problems, like a lack of intimacy, actually stem from this. She reveals, "Once communication goes, so does sex! People think the decrease in frequency and disappearance of sex and love-making is the problem but it’s not. Talking is the glue that holds relationships and people together."

You or your partner doesn't consider the other person's feelings

Immediately, this creates an imbalance in your relationship because one person feels like their feelings are constantly pushed aside. If you or your partner feels like you can't be honest about your feelings, you become reluctant to share but your feelings don't necessarily go away. Dr. Walfish says, "When a person’s negative feelings are not validated, they will likely get more powerful and create a barrier between them and their partner."

Although suppressed negative feelings, like jealousy, present more of an issue for you and your partner because of their volatility, even keeping positive ones, like optimism about the future of your relationship, to yourself can be detrimental. "Everyone is entitled to their own feelings, so do your best not to belittle your partner or minimize the importance of their feelings," Dr. Walfish explains.

Your partner is stonewalling you

This happens when you or your partner refuses to open up to the other person. They avoid questions or respond with broad generalizations that keep you at arm's length. Often, it's a defense mechanism to avoid seeming vulnerable. According to Dr. Walfish though, "When you expose your own vulnerability, the other person feels welcome to do the same with you."

Try starting a conversation with your partner by sharing a struggle you're currently facing, like working through a difficult class at school, or dealing with a frustrating problem at work. Ask them how they would handle a similar situation. The more you open up to them, the more willing they will be to return the favor.

One of you is overly confrontational while the other is reticent.

Dr. Walfish says, "One of the biggest red flags that people often ignore is their inability and reluctance to communicate openly regarding conflict resolution." If one partner is always quick to argue while the other avoids confrontation at all costs, it will be almost impossible to work through both minor and major disagreements.

In this situation, Dr. Walfish recommends that the instigating partner avoid universal statements like, "You always," or "You never." "Instead use 'I' statements that focus on how you feel without blaming or accusing your partner," she explains. As for the partner who isn't sure how to respond in times of conflict, focus on being an empathetic listener. "If you are shy and don't know what to say, offer compassionate reflection of what you hear the other person saying. This allows the other to feel heard, validated, and accepted — flaws and all," she tells Elite Daily.

One of you lies frequently.

Just so we're clear, lying by omission is still lying. You and your partner should always be honest each other, even when you don't want to be. Dr. Walfish explains, "Sometimes the truth is uncomfortable, especially if you know your partner may get angry hearing it. But honesty in a relationship is extremely important because it's what makes a person feel safe and secure."

Aside from flat-out lying, she also advises against embellishing or exaggerating the truth. By doing this, you're not sharing the real you with your partner, which is bound to create problems later on.

Neither partner is open to compromises.

Regardless of how compatible that online quiz says you and your partner are, you won't always agree on everything. An inflexible partner is often a selfish one who prioritizes their needs while disregarding the opinions of others.

Your romantic relationship should never feel like a dictatorship. Both partners should feel comfortable voicing their opinions, even if they don't always match the other person's. It's a sign of emotional maturity and mutual respect in your relationship.