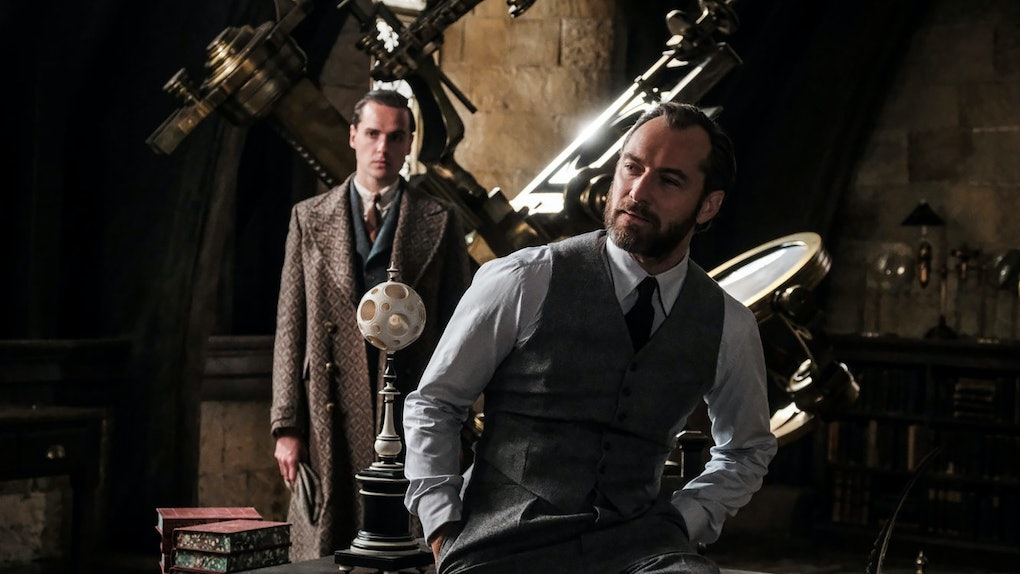 5 'Fantastic Beasts: The Crimes Of Grindelwald' Theories That Will Put A Spell On You

Crank up the Tumblrs and the fan theory corners of Reddit, there's a new wizarding world movie on the way. It there's one thing Harry Potter fans are known for, other than their fan fiction, it's their abilities to spin fan theories from here until the dragons come home. The new trailer for the sequel to Fantastic Beasts And Where To Find Them certainly gave everyone a lot to chew on. Since it's arrival, the Fantastic Beasts: The Crimes Of Grindelwald theories have been coming thick and fast.

Nor should we expect the theories to slow down anytime soon. Even those who are not major fans of the new film series — or feel a little perplexed by the bait-and-switch of the first film, which promised fans a story about a mild-mannered Hufflepuff in a fish-out-of-water situation in New York but then turned out to actually be the prologue for the famous 1945 Grindelwald-Dumbledore showdown — are wild for all the new details about the Wizarding World that these films provide.

So, let us sit down and go over some of the biggest theories that have come out of watching the first trailer, and discuss what we might learn in Fantastic Beasts: The Crimes Of Grindelwald.

1. People Used To Be Able To Apparate Into Hogwarts

When the trailer arrived earlier this month, a cry went up across the Potter fandom. Unless we all were mistaken as one, several men from the Ministry had just apparated onto the grounds at Hogwarts.

That's not a thing. Hogwarts is protected ground. Everyone who has read their Hogwarts: A History with Hermione knows that.

But what if... 90 years ago, that actually wasn't true? What if the ban on apparating onto Hogwarts grounds was actually instituted by Dumbledore after he became headmaster? What if it was incidents like this that drove Dumbledore to make that policy? That's one explanation anyway.

2. Obscurials Are Related To Horcruxes

Fans have been trying to explain how Credence, who looked most definitely dead at the end of Fantastic Beasts And Where To Find Them, might have survived.

One theory: "Obscurials" and Horcruxes actually aren't that different. This stems somewhat from the way Credence seemed to die in the first movie. To many fans, it was reminiscent of the way Horcruxes are destroyed. Will we find out there's a connection in the second film between these two evil magics?

This was a funny detail hidden away in the trailer that required fans to blow up a screenshot of the scene in the sewer where an unknown man (Dumbledore?) stands in front of some sort of family tree like item, which includes both the names Leta Lestrange and Credence Barebone looking as if they might both be descendants of Corvus Lestrange.

Are the Barebones actually related to the Lestranges? That might explain why the attraction to dark magic runs so strong in their families.

Speaking of Leta Lestrange... last we saw Newt, he seemed to have believed her to be his girl. Upon leaving America, though, he was obviously thinking twice about pursuing her now that he'd met Tina.

Maybe not, though. Newt was obviously questioning everything about his crush on Leta by the time he was heading home in the last film, and it's been a full year since then. While most fans assume Newt and Theseus are on opposite sides of this war because of Leta, what if it was actually Newt who broke things off? What if Leta is really trying to sabotage the brothers' relationship to punish Newt? Somehow, Newt's dislike of people suggests her manipulations wouldn't work.

The biggest theory is that of the Maledictus, who Credence is hanging out with. What is a Maledictus? According to the Harry Potter Wiki:

A Maledictus was an individual whose blood was cursed, eventually leading to them turning into a beast.

Eagle-eyed fans noticed her poster in the Wizarding Circus shows her in the form of a snake, leading to wild speculation that her final form will turn out to be one of Harry Potter's most mysterious characters: Voldemort's pet Nagini.

She always did seem somehow smarter than your average snake...