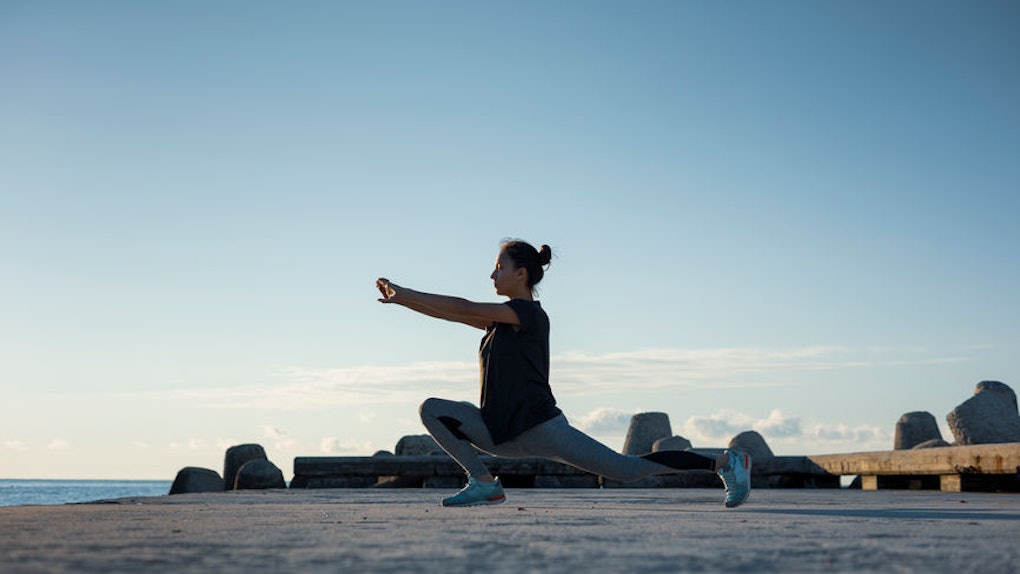 5 Exercises That Make Running Easier, Even If It's The Bane Of Your Existence

There are only two kinds of people in this world: running enthusiasts, and those who firmly stand by the fact that running is the bane of their existence. Just because the latter group hates running, though, doesn't mean they never do it, because after all, it is a great workout, not just for your body, but also your brain. Fortunately, for those of us who aren't that fond of this cardio workout, there are some exercises that make running easier — so maybe, just maybe, one day you can start to enjoy a nice, mind-clearing jog from time to time.

If you're perplexed as to why running is so hard for you in the first place, especially when it seems like everyone else you know can casually crush a five-mile run with ease, Tyler Spraul, a certified strength and conditioning specialist and the head trainer at Exercise.com, says it might be because you're not complementing those jogs with strength-building workouts.

"Because [they have] to absorb a lot of impact while running (especially if they run on pavement), runners should be doing lower-body strength exercises to build up strength and increase joint mobility to help prevent injuries," Spraul tells Elite Daily over email. "If you haven't been doing anything but running, adding exercises like this to your routine can lead to a big boost in your running performance."

But is it really that simple? Spraul thinks so, and he says there are a select few exercises that can help improve your ability to run — that is, if you're willing to commit to them on a regular basis. These five moves strengthen your muscles and connective tissues, so you'll be better equipped to deal with the toll that running takes on your body.

According to Spraul, lunges are one of the best moves you can do to make running easier and more enjoyable — but don't just stick to the traditional version of the move. The trainer recommends reverse lunges, which he says will help strengthen your glutes, hamstrings, and quads in preparation for your pavement-pounding sessions.

"Instead of stepping forward like the traditional lunge, all you need to do is step backward and lower your knee until just above the floor," he tells Elite Daily. "Then reverse the motion and return to the starting position." He suggests starting with 10 to 15 reps on each side, and building from there as your strength improves.

Another great variation of the lunge involves taking it to the side, to target the inner and outer thighs. Simply step to one side, then drop your hips as low as your range of motion will allow, so your weight is mostly over your standing leg, Spraul explains. You'll be working to get lower over time, he says, but be sure to listen to your body so you don't accidentally strain yourself along the way.

"If you want to use weights on these, you can [either] hold the dumbbells centered and slightly in front of you, [or] try to hold them at each side [of your body]," Spraul says.

Bulgarian split squats are really similar to the classic squats you're probably familiar with, except one of your legs will be raised on a platform (you can use a box, a chair, a bench — whatever works for you) behind you as you're coming down for each rep. It's a minor change, but according to Spraul, it makes a major difference in helping you feel more comfortable with running.

"Start out standing with a bench just behind you, [and] place one foot up on the bench so the top of your foot is resting on the bench," the trainer explains. "Once you're in position and have solid control of your balance, lower yourself toward the floor. It may be helpful to place a pad or yoga block on the floor to provide a reference point for how low your knee should go."

To finish, he says, push through the heel of your planted foot to return to the top. Start with 10 to 15 reps, says Spraul, and work your way up from there.

Ah, planks: They look pretty easy from afar, but 30 seconds into the workout, I can pretty much guarantee your entire body will be vibrating.

You might not think core strength really matters much for something like running, since it's all about using your lower body to propel yourself forward. However, Alina Kennedy, a physiotherapist, personal trainer, and founder of sprintrehab.com, an online exercise resource for runners, tells Elite Daily that training the muscles in your core is extremely important in running because it will help you move with more control and grace. "[Having a strong core] not only saves energy, but also helps avoid extra stress on muscles and joints which could lead to injuries," Kennedy says.

There are tons of different plank workouts you can try, but a good place to start is with a side plank, which is seriously challenging for your balance, and of course, your core.

According to Kennedy, clam shells are a great way to stabilize the muscles in your lower body, which makes running feel a whole lot easier overall. "If your muscles are stronger and working more efficiently, each step [during your runs] takes less energy out of your body and leaves you room to run further," she tells Elite Daily. Makes sense, right?

Kennedy suggests using a resistance band during this workout if you want to up the intensity, increase strength, and make the most of this hip-focused move.