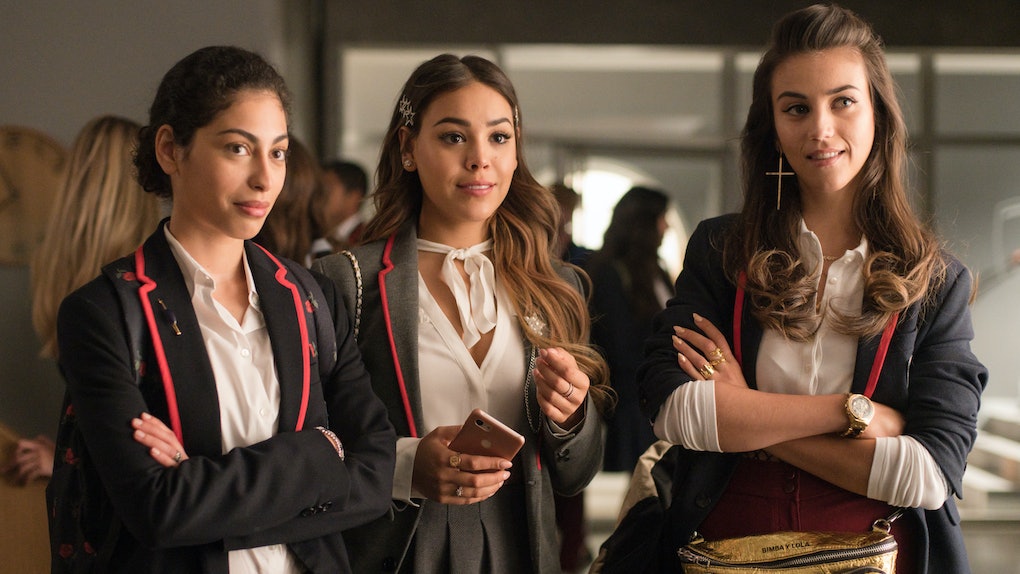 Probably the most shocking way for Elite to end a season is with a happy ending, and that's why fans are pretty confused about where the show might go following its Season 3 finale. The latest season seemed to signal a change for the series, if it continues, and a ton of ideas about what might happen next are already bubbling up. These Elite Season 4 theories all predict a major shift for the show.

Spoiler alert: This post contains spoilers from the Elite Season 3 finale. The future of Elite has never been more up in the air than after its third season. While Netflix has yet to officially announce a Season 4 renewal, outlets are reporting the streaming service has already greenlit a fourth and fifth season of the hit teen series. However, it is not clear what those new seasons could look like, given how Season 3 ended with a big chunk of the lead characters departing from Las Encinas.

In the finale episode, Lucrecia and Nadia jetted off to New York City with a joint scholarship to Columbia University, while Carla also set off on her own study abroad plans. With Polo dead and Valerio taking over Carla's family wineries, only six characters are still at Las Encinas: Sam, Guzmán, Rebeca, Ander, and Omar are all repeating their senior year, while Cayetana has returned not as a student, but as a janitor.

With the show's future seemingly in limbo, there are a few different theories about what a potential fourth season could look like.

The most prominent theory going around is that Season 3 actually concluded the stories of Sam, Guzmán, Nadia, Lu, Carla, and all the rest of the main cast. The Spanish news site Fuera de Series reported that Season 4 will refocus the show on a brand-new set of characters, suggesting Elite will follow a similar cast-swapping structure as the U.K. series Skins. The move makes sense, given the Season 3 finale seemed to wrap everything up, even getting rid of Polo, the main cause of all the show's drama.

Lu and Nadia are off to begin a brand-new life in New York City, so what if the show opts to follow them in Season 4? It would be a bold move to take the series out of its Spanish setting and move it to America, but it's a possibility. New character Malick is also going to be in New York with Lu and Nadia, and there's a good chance some other main characters will want to travel stateside too. Carla didn't mention where she was planning to study abroad... could it also be New York? Plus, you can bet Guzmán would jump at the chance to be with Nadia in NYC after he finishes up at Las Encinas.

Half of the characters have moved on from high school, while the other half are stuck repeating their senior year, but a time jump could fix that division. If Season 4 jumps forward a year, to after Las Encinas' next graduation, then everyone would be out in the real world... and possibly facing even bigger challenges than ever before.

It's difficult to not read into the final image of Elite Season 3 being a visibly upset Cayetana working as a janitor at Las Encinas, giving into the blue-collar life she had always so desperately avoided. Everyone got a happy ending except for her, and with Polo now dead, she has even more reason to resent her classmates. Could Cayetana become the show's villain in Season 4? Only time will tell.