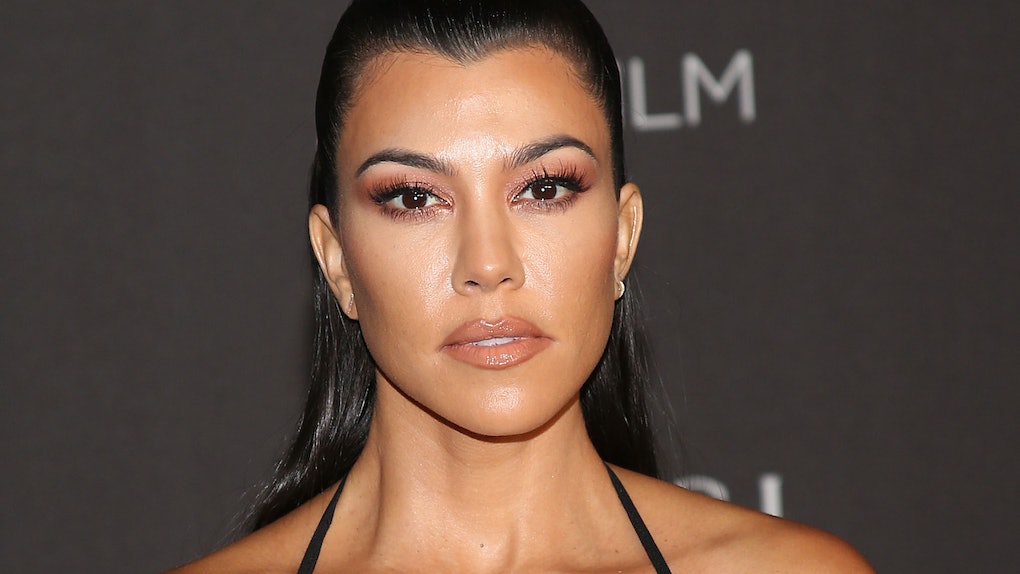 The Kardashians seem to have one major foe and it is seemingly Photoshop. Every single member of the Kardashian-Jenner clan has been accused of over-using the photo editing software that's become somewhat synonymous with manipulating celebrities bodies on magazine spreads and, now, social media. So much so, they seemed to overlook egregious errors in their own work. However, the number of times Kourtney Kardashian was accused of Photoshopping her photos on Instagram is kind of sad because, if there is Photoshopping involved in the photos, it seems like she didn't even do it herself. A professional probably did, yet she still wound up with some apparent major anatomical errors.

In March 2019, Kourtney posted a super sultry photo of herself in a bathtub. She looks amazing at first glance. Her eye makeup appears flawless and her eyebrows are arched for the gawds, honey! However, upon closer examination, her face doesn't seem to match the rest of her body. It could be the lighting, but the inconsistency of her skin color and texture between her face and body makes it appear like her face was Photoshopped onto her body.

One Instagram user stated the question many were thinking when they looked closely at the photo, "Why does her face look pasted on? Very odd looking photo."

Odd indeed. Then, as your eyes move further down the photo something looks terribly out of place.

Like, did she break her leg out of place? Her left knee is bent far below her right knee and there is no sign of a left thigh. Simple human anatomy plus a zillion other photos of the mom of three on the internet tells me her left knee just isn't positioned that way. How could it get there? My brain says it's not humanly possible. On the other hand, the water is quite bubbly and could be covering up the upper left portion of her thigh making it appear very long and very awkward.

Of course, the comments section went straight for her leg.

"What's up with that leg though lol," wrote one user.

Another came for blood with some pretty brutal commentary: "Kourtney lol, Photoshop fail what happened to ur leg ......... oops, stop thinking u are some hot thing, Kim is right u are the least interesting to look at, who makes there [sic] nannies call them madam."

Whoa, shots fired. But, there was one fan who seemed to be all in favor of the bathtub blunder. "I love your left leg," they wrote. Hmm, to each their own.

One Toe Too Many

In the same month (March 2019), Kardashian was yet again on the receiving end of what looked like a botched Photoshop job. Kardashian's sister Kim shared a promotional photo for season 16 of Keeping Up With The Kardashians on her Instagram. Fans were quick to spot what looked like numerous fails within the photo, like half-sister Kendall Jenner looking like she was completely copy-and-pasted in.

Kourt, on the other hand, look seemingly normal, until you get to her feet, which appeared to display yet another anatomical anomaly. Do you see it? It looks like she has six toes. The internet, like myself, had so many questions.

"What's up with Kourtney's left foot?" one user asked while another said, "Kourtney has six toes hahahaha."

Again, this is another professional photo so I have no clue who is at fault here if it's not bad photoshopping — possibly a shadow creating the illusion of another toe? The world will never know...

In August 2018, the Kardashian-Jenner clan was front-and-center in a new grayscale Calvin Klein ad, and let's just say it looked like Calvin Klein's editing team may have missed some thangs. Kardashian seemed to suffer yet another awkward Photoshop fail. Her arm on the left is way smaller than her arm on the right. This could be the result of the lighting and grayscale photography. Either way, fans found it strange.

"Wow who shopped this? They need to be fired. What's with Kourtney's one arm?" a user wrote.

Calvin Klein claimed there were absolutely no errors in the photo, and claimed reposting it in a low-res format led to the appearance of Kourt's teeny tiny arm.

So, Kardashian has been caught up in a few apparent Photoshop fails, but definitely not quite as many times as some of her famous sisters!