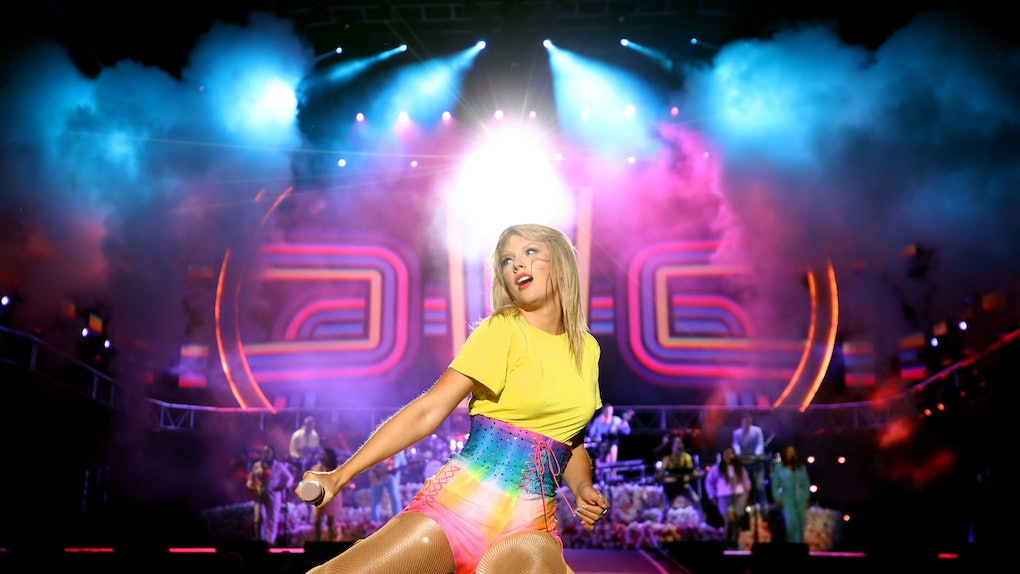 Taylor Swift has blessed the Swifties. The "You Need To Calm Down" singer did an Instagram live on July 23. During that livestream, she talked about her 10 VMA nominations, the deluxe editions of her album Lover, and (much to the delight of her fanbase) she announced that a new song from the album would be dropping "imminently." Before midnight on July 23, Swift dropped the song "The Archer," as well as a lyric video for the track. The livestream also broke down some previous hints she dropped about the song, so we're here now to break down all three "The Archer" easter eggs in Taylor Swift's music videos that y'all might not have clocked as easter eggs. But first, more context!

Swift said in her live stream,

There’s a lot that’s covered emotionally [on Lover], and I really wanted to give you track five before the album came out so track five is kind of a tradition that really started with you guys because I didn’t realize I was doing this but…instinctually I was putting a very vulnerable honest emotional song as track five. So because you noticed this, I started to put the songs that were honest, emotional, vulnerable, and personal as track five.

The song is blatantly emotional. You can take a listen/check out the lyrics here:

And that brings us to the first easter egg! We shall start with the most obvious one.

1. In the "You Need To Calm Down" music video, singer Hailey Kiyoko shoots an arrow into the bullseye of a target. That bullseye has the number five on it.

Even I, who doesn't consider myself to be a Swiftie, knew that five was going to mean something. I'm not versed enough in Swiftie Sleuthing to have figured out that it was hinting at the fifth song on the album, but I know filmmaking, and that shot was intentionally telling!

Another easter egg can be found in the "ME!" music video.

2. Remember the cupids near the end of the video? Yup, easter eggs!

They're a reference to Cupid and their arrows making people fall in love.

Some of Swift's fans (who really should be detectives) pointed out that the cupid scene in "ME!" was the song's fifth scene. The first was the scene where Swift and Brendon Urie fought (in French, no less), the second was the scene where Swift walked through a room of clouds, the third was the tuxedo and briefcase scene, the fourth was when Urie gave Swift a kitten to make up to her post-fighting (she adopted that kitten in real life, by the way), and the fifth was the cupid scene. Swifties, man. They notice everything.

Swift listed out these easter eggs in her live stream, so good on you if you figured them all out before she laid them out! Outside of the easter eggs, Swift revealed that she worked on this song with Jack Antonoff, and that "The Archer" is a small glimpse of the work they've done together on Lover.

While Swift noted that "The Archer" is not the album's next single and that there is no music video made for it, she was in her trailer on the set of a new music video during the Instagram Live, and she was wearing a T-shirt that had a bow and arrow on it, as well as a bow and arrow necklace. It's a mystery what song she's filming a video for, but I'm sure Swifties will crack the code before I do.