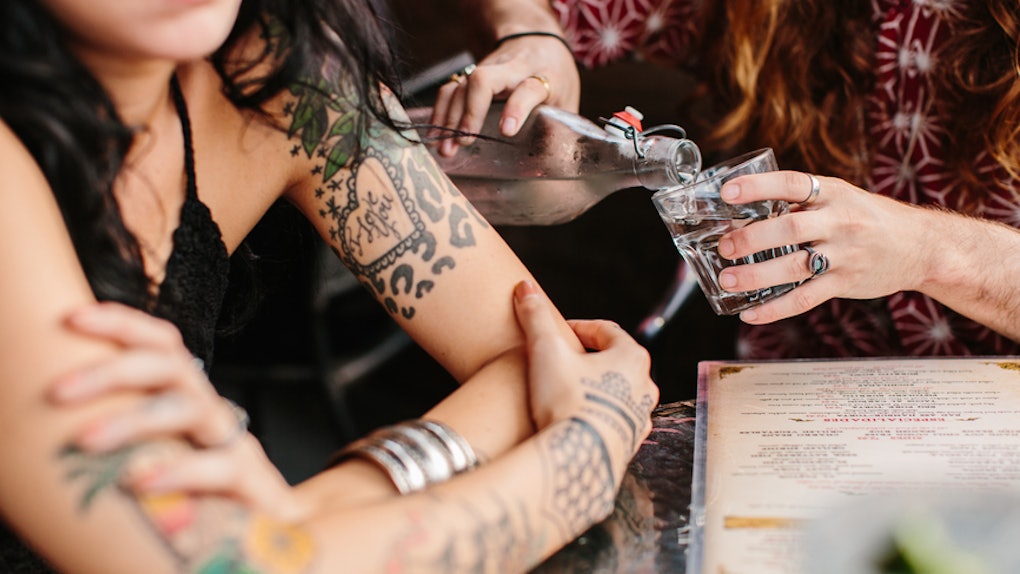 I hate the novelty pet names our generation gives to bad dating manners (see: "breadcrumbing" or "benching," lest we forget the OG "ghosting"). When it comes to "negging," though, I'm torn. While my slogan remains "Adding The Suffix '-ing' To A Bad Behavior Doesn't Make It Cute 2018," I do appreciate that the popularization of the term negging has brought attention to the behavior itself. There have always been signs you're being negged, but maybe you've missed them until now.

If you are wondering what negging is, you're not alone. I've heard the term plenty, and I still gave it a Google to make sure I had interpreted it correctly. I also spoke to behavioral scientist and clinician Clarissa Silva, you know, for non-Google confirmation and stuff. "Negging is a form emotional manipulation that lowers self-confidence and self-esteem to create a co-dependence on the manipulator," she says.

Basically, negging is a backhanded compliment. Insult-flirting. A subtle way of making you feel "less than." My initial Google of the term brought me to a website created by a man who had trouble getting laid early on in his life. Apparently, he now advises men with similar grievances online. His article recommended such negs as "Your nose is a little red. You’re like an Eskimo. Cool," and "You remind me of my little sister." What I recommend? GIVING THESE KINDS OF COMMENTS A HARD PASS.

So how do you know if you're being negged? It's not always as obvious as the aforementioned website's lame ways of approaching a human woman. Here are some more subtle signs of negging to look out for.

1. They Comment On Your Appearance In Ways That Make You Feel Insecure

If your partner, or even a stranger at the bar, makes a comment about what you are wearing or what your face looks like, it's a good idea to pay attention to how that comment makes you feel. "You have really pretty eyes" is a totally flattering, acceptable compliment, while "Wow, do you get your eyelashes done?" or "When did you last get your brows done?" are definitely designed to make you feel at least a little bit badly.

2. They Compare You To Other Women

Another major red flag that indicates negging is "comparison to other women to create doubt in you," says Silva. Yes, even to their "younger sister." If someone compares you to Meghan Markle in a good way, great. Fine. That's fair — we'd all take it. However, if someone is pointing out where your flaws lie in relation to other women they know, or have seen on Suits, they're negging you, and it's pretty gross.

3. They Self-Deprecate To Get You To Pity Them

If your partner or date is consistently talking down on themselves, they're engaging in another form of negging. Silva says that a partner may engage in self-deprecation to get you to pity them, thus maintaining their dominance in the relationship. "Emotionally needy types need you to fill the gap of what they are lacking themselves," says Silva. "They need you to be there to act as a lifeline to their emptiness."

So why do people engage in this awful behavior? Does it really get them laid? I can tell you that, while I have been known to have crushes on certain withholding men, I have never been turned on by a man who has been straight up mean to me.

And it's not only men who do it. "Negging is not just about male dominance, it’s about what I call the 'predatorial type,'" says Silva. "They exert a false sense of power to mask their own weakness and self-hatred. They resent and admire their prey because they embody what they wish they could be."

What To Do About It

If you are reading this, and you think you may be in a relationship with someone who negs you, there are steps you can take to put an end to it. First, Silva recommends you take note of the signs of negging, as recognizing them will allow you to not engage with them. Second, it's important to take a look at your own self-worth: Are you being treated in the way you truly deserve to be treated?

If you're looking to move past a specific negative relationship, or a general tendency to date people who make themselves superior to you, Silva recommends looking at dating like a social experiment. "Treat dating like you are collecting data on what you want and don’t want," she says. "See what combinations of qualities and characteristics better complement you."

I will back her recommendation up with real-life experiment: I am in the midst of a 51 first date experiment, and while I'm only on date 10, I've already decided that the majority of men out there are good guys. Also, I've only been negged on one of 10 of those dates, so that's good, I guess? Baby steps.