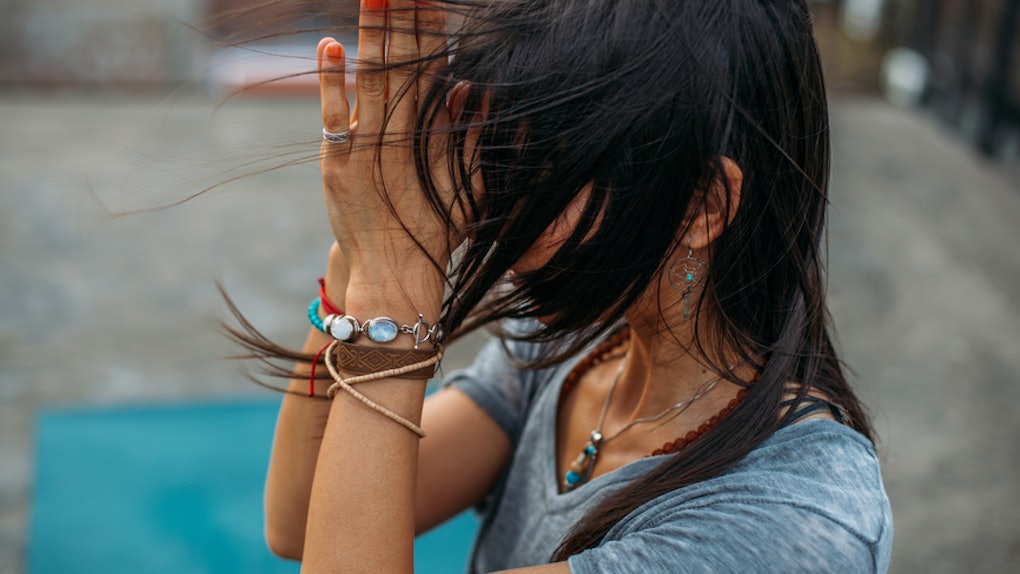 I make a living writing articles about astrology, spirituality, crystal healing, meditation, affirmations, and tarot cards, so I'll be the first to admit that I came to learn about these healing techniques during the most difficult time periods of my life. I love new age spirituality, and I think it's great, as long as it isn't being used as a tool to bypass your emotional life. There are signs you could be using spirituality to avoid reality, and when that happens, spirituality becomes a facade. After all, one way to suppress the emotions that are an integral part of the human experience is to pretend to be too "enlightened" to feel them.

Here's a personal example from my own life. A few years ago I was completely out of money, and I spent 30 bucks on credit to buy a crystal that promised to attract more money in my life. The second I bought it, I was 30 dollars poorer. I mean there was absolutely nothing logically sound about that purchase. I was a modern Jack and the Beanstalk; I was not OK. It wasn't until after I bought that crystal that I realized I didn't even have enough money for a Metrocard to get home. This is the kind of subtle power that new age spirituality has over a ton of people, and unfortunately, often the people who fall prey to this kind of magical thinking are really going through a tough time. Here are some signs that you could be using spirituality as a way to escape your real life, and some pointers on how to avoid it.

You read self-help books more than you help yourself.

A long time ago a book came out called The Secret, which caused an absolute frenzy of interest along the lines of new age spirituality in America. The book essentially spoke about how the secret to anything you want being right in your fingertips. From a parking space to a brand new Mustang convertible.

It was basically a watered down version of quantum physics, and the idea behind it was that all you had to do was ask the universe for something, and like Santa, it would just create it for you. You didn't even have to lift a finger! This is pure delusion. I mean millions of adults around America were essentially believing in Santa again, and calling it "The Universe." No.

Spiritual experience is actually inextricably linked to our human experience, because they're the same thing. Spiritual wisdom is not the same thing as the mind and body rush you experience from time to time in a meditation. "Enlightenment," as it's often described in our capitalist society's obsession with Eastern religion, is not what we think it is, or what we've been taught it is.

I like to compare it to the difference between love in the movies and love in real life. Love in the movies is a constant high, lasting for the rest of our lives; in truth, loving someone else is harder work than any other task I've ever been called to do. It involves remaining patient to the best of our ability, a willingness to be honest and open without hiding in fear or foisting hurtful truths onto another person, not to mention dealing with their inability to do the f*cking dishes. The same goes for spiritual wisdom. It's more grounded and, based in real life, and real work, than anything we are taught. One time, I fainted in yoga and I thought I'd "caught The Lord." Turns out I just have low blood sugar and stood up too quickly.

You theorize about emotions more than you allow yourself to experience them.

All human beings have a tendency to bypass our emotional lives for something more pleasurable. We know, theoretically, it's good to let yourself cry from time to time, but we ACTUALLY hide our faces when we do it. There is a voice inside all of us, ingrained in us, that tells us if we're crying, or if we're angry, "something is wrong. Something bad is happening." In truth, those emotions are as valid and useful as happiness. It's the shame that we attach to sadness and anger that makes them feel wrong. Think about what those two emotions would feel like if we weren't taught that they were wrong. They would feel like a RELEASE, the same way laughter does.

When the human ego attaches itself to new age spiritualism, it conveniently bypasses the discomfort of working through these emotions. Instead, it leads to an "I-can't-hear-you-from-this-higher-plane-of-existence" sensibility. These people will encourage you to explore your consciousness, yet having never explored their own, they refer to "consciousness" as if it's somehow restricted to the mind, detached from the physical body, where emotions are actually felt.

The truth is, these people are extremely threatened by their inner emotional lives. They've skipped over the emotional healing that's necessary to truly gain a spiritual understanding of the world.