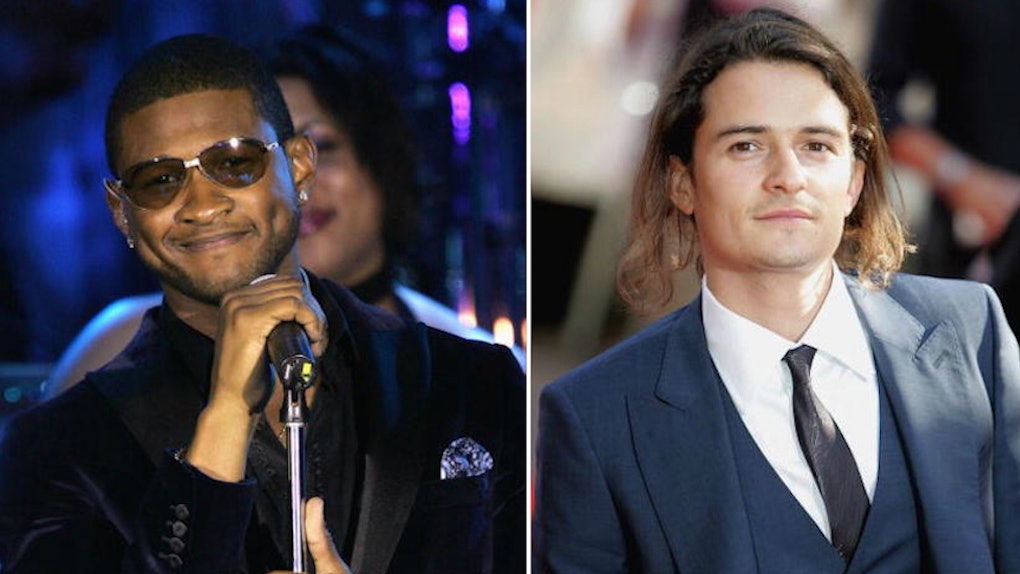 My very first celebrity crush was David Bowie as the Goblin King in Labyrinth. Maybe it was the accent, or the hair, or the glam eye-makeup — or maybe it was that egregious codpiece that sent my pre-teen heart all aflutter. Whatever it was (codpiece, duh), the crush was instantaneous and intense. And while his romantic pursuit of a teenage Jennifer Connelly in the movie is creepy AF in retrospect, Bowie as Jareth will always hold a special place in my heart. Those early crushes are powerful, so when women reveal the celebrity crushes they’ve had forever, I totally get where they're coming from — even when they are a little, ahem, awkward now.

While celebrity crushes aren't uncommon — I mean, we all have them, right? — I had to wonder if other people’s were as admittedly weird as mine. Naturally I turned to Reddit, where nothing is too strange or personal to confess. Turns out, I'm not alone. There are lots of strange celebrity crushes (and plenty who agree with me that Bowie was hot). And there were lots that, though they weren't my first swoon, are definitely swoon-worthy. Here are the long-time celebrity crushes women confessed to, and honestly, I don't blame them.

Ewan McGregor as Obi-Wan Kenobi, I didn't really have a celebrity crush until I got a bit older. Swoons I still find him attractive.

I remember watching 3rd Rock From the Sun and thinking the teenaged character Tommy (JGL) was really cute. Joseph Gordon-Levitt has absolutely held up to my girlhood crush

Justin Timberlake. And he is even hotter than ever now.

Wil Wheaton. As a grown-up, my husband kinda looks like him with long hair. I guess I have a type...

Zac Efron. God, I loved that man. And yes, he will always be beautiful.

Daniel Radcliffe! My preference is women but in a weird way I still find him quite attractive

Jim Carrey and yes, even if he gives a bit of a weirdo vibe sometimes.

David Duchovny. And he only gets better looking as he gets older, IMO. Mmmmm

Was in love with David Bowie as a child. Found him attractive until the end.

The Sprouse twins from Suite Life Of Zack and Cody, and yes very much. Also you know that blonde kid at the end of Casper who dances with Christina Ricci? Him too.

Tom Felton was my first celebrity crush from the moment he was introduced in the first Harry Potter movie (we were about the same age at the time so it wasn't weird.) I find him slightly less attractive now but for nostalgia's sake I would still totally make out with him. 11 year old me would high five me for it.

Max Thieriot ever since Catch That Kid. Love him in Bates Motel

Jon Stewart. I remember sitting with my parents watching the Daily Show and thinking he was pretty charming. Still do.

Jeff Goldblum after I watched Jurassic Park for the first time. Now that he's widely thought of as cool again I'm less embarrassed to admit I'd still hit that.

(Wait. Can I change my answer? Jeff Goldblum circa Jurassic Park was fire.)

I LOVED Nick Jonas growing up... and yes, I still find him super attractive. I still have a page from a 2006 Tiger Beat magazine with him eating a cheeseburger lol.

Charlie Hunnam in Nicholas Nickleby. He had killer cheekbones and i suppose he has aged perfectly. 10 year old me made a good decision fancying him!

Usher. I have had a crush on him since he was in his teens and I was in middle school. And goddamn that man is still fine as all hell

Orlando Bloom. I had the hots for the long-haired blonde elf. I ended up marrying a look-alike

John Stamos. I'm so, so happy uncle Jesse is back.

Mark-Paul Gosselaar, aka, Zack Morris. I remember cutting out his pictures from Teen Beat and putting them all over my wall, and a little picture in my wallet. I was head over heels for him, and I remember sitting in my diary just how badly I wanted to meet him. And yes, I still get giddy when I see him on TV or online. ::swoon:: ❤️

As you can see, celebrity crushes are all over the board, so whoever made your heart first go pitter-patter — or still does to this day — it’s all good. What can I say? The heart wants what it wants.