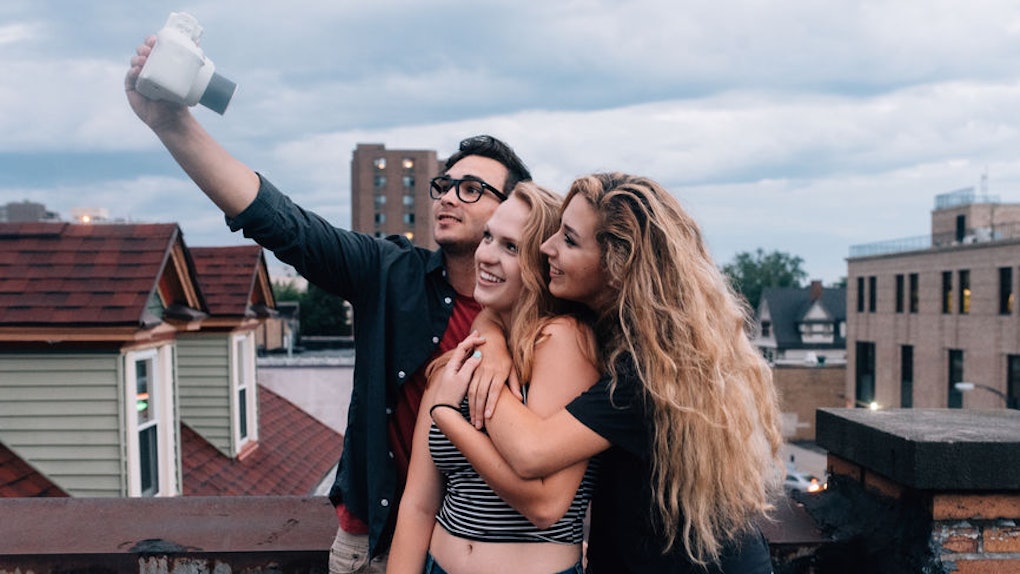 22 Tweets About Third Wheeling That Are So Real, It Hurts

Before my current relationship, I was single for a long time, which means I've put in some pretty serious time as a third wheel. You know, the third person who hangs (sometimes awkwardly) out with a couple on the reg. Sometimes it feels totally natural to hang out as a trio. But other times, and especially when they're a new couple who can't keep their hands off one another, the third wheeling struggle is real. If there's one thing to ease the pain of being a serial party of three — if these tweets about third wheeling are any indication — at least you aren't alone in, well, being alone with a party of two. After all, sometimes just knowing other people are going through the same thing as you can take some of the sting out of it.

Or maybe you're currently coupled up with a third party who hangs out with you so much you're practically a triad, and you want to know what's really on your friend's mind. Well, if Twitter is good for anything, it's keeping it real about what we're feeling. Here's how fellow third-wheelers on Twitter feel about their experiences being a couple's forever plus-one. It's so true, it almost hurts.

This proves even superheroes get the third wheel blues sometimes.

This is one way to make the most of your third wheel status.

On the real though, there's nothing quite like standing in the front of your group and imagining you're in the mall scene from Mean Girls. You know you've pictured it.

Who needs a date when you have beer?

Honestly, free beer in exchange for third-wheeling isn't that bad of an exchange if you ask me.

If a relationship is what you want, trust that it'll come with time. Pretty soon, you're bound to have someone to "go on holidays and festivals and everything" with. I have single friends! HMU!

Yep, I know how this one feels, too.

If this happens to you, speak up! Insert yourself into the conversation or call your couple friends out in a funny way by saying something like, "Ah, yes, I love third-wheeling. It's the most fun, fun thing!" They should get the hint.

Yeah, third-wheeling gets harder the older you get and the more married everyone else gets.

Nothing is worse than feeling like you are the odd man out with friends.

I feel bad for whoever has to third-wheel me and my BFF. Sorry not sorry.

Keep your chin up.

But, it doesn't have to. If you're with two of your friends who just so happen to date, change your perspective from "I'm third-wheeling," to, "This is just a casual group-hang. These are my friends, and we have so much in common."

Say that a little louder for the couple making out in the back row.

Sometimes third wheeling has its perks, like when you get to be front row for some drama.

Nothing is more awkward. Nothing.

We really need an app for third wheels to find fellow single friends.

So, who's going in on this with me?

When "Stranger Things" hit us all right in the third wheel feels.

This. Seriously. Justice for Will.

Now this is some serious third-wheeling. Is it weird that I'm low key impressed?

At least prep me a little?

Just kidding! This, this is more awkward.

All the fun of being a couple, with none of the responsibility.

There are perks to singledom, people!

Just make sure to stop playing before you go pro.

Sounds like a million dollar idea, let's make it happen.

It's true tho. Sorry, not sorry.

See, it's funny because it's true. Sure, being the third party isn't always easy or even fun, but sometimes you just have to embrace it, go with the flow, and make the best of it. If you are third-wheeling, it's probably because this is a couple you are friends with. Consider them just that: Your friends. All of a sudden, you might find that this third-wheel situation feels like less of a situation, and like more of just you hanging out with your friends. That, right there, is something to celebrate.