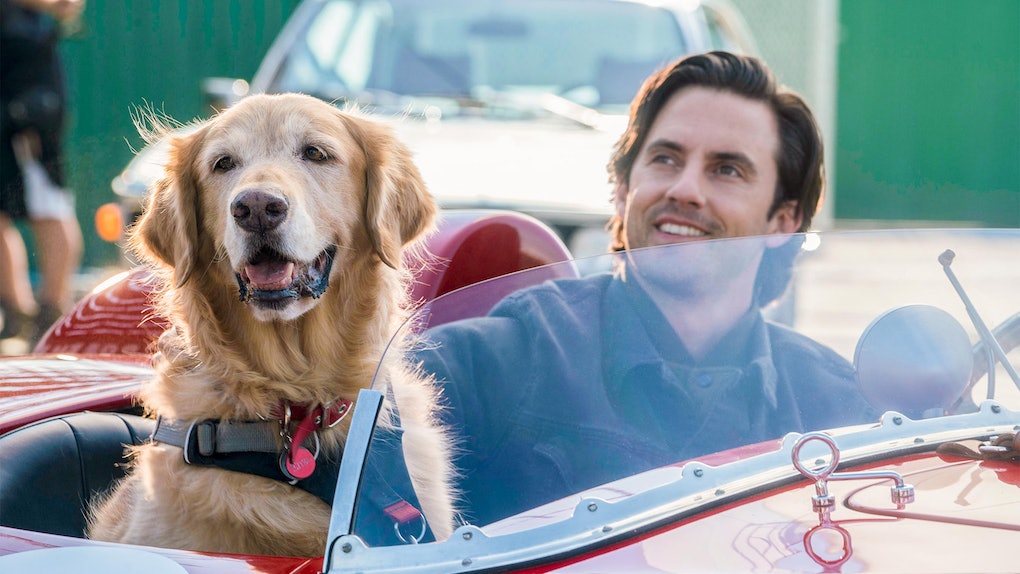 A dog is often a person's best friend, but if there's anything movies about dogs have taught audiences, it's that these bonds are all fun and games until something heartbreaking (almost always) inevitably happens to the dog. Having a pet can teach people of all ages about life's progression, and while staring at human actors like Milo Ventimiglia for two hours is also a good selling point, movies about dogs like The Art of Racing in the Rain have much more to teach you about your canine bestie.

Based on a bestselling novel, The Art of Racing in the Rain stars Ventimiglia as the owner of Enzo, a Golden Retriever whose thoughts are voiced by Kevin Costner. After adopting him as a puppy, Ventmiglia's race car-driving character Denny takes Enzo completely under his wing. When Denny meets and falls in love with Eve (Amanda Seyfried), Enzo struggles to connect with her, but a sad turn of events requires him to support Denny more than ever before.

Whether a dog is teaching his owners a lesson about life or creating havoc in their home, Hollywood loves tackling all the ups and downs of these relationships. If you've already cried your way through The Art of Racing in the Rain, check out the picks below for your next doggy drama or canine comedy.

Like The Art of Racing in the Rain, Marley & Me follows a couple through life as they deal with their particularly rambunctious dog Marley. In between Marley's messes, the pair realize their lives not going according to plan has changed them for the better.

They say cats have nine lives, but A Dog's Purpose explores the possibility of dogs' reincarnation over time. Featuring Josh Gad's voiceover as dog Toby, the movie follows Toby through several of his lives and how he came to meet each of his owners. A sequel was released in 2019, so if your dog is nearing the end of his or her time with you, these stories may bring you comfort.

In Homeward Bound: The Incredible Journey, three siblings' pets, including two dogs and a cat, are briefly left behind when their family temporarily relocates to San Francisco. After a mix-up between their caretakers has the animals thinking they were abandoned, they decide to trek back home on their own.

Spawning several sequels each featuring a different sport, the original Air Bud is about a Golden Retriever whose natural talent for basketball lands him on his new owner Josh's middle school team. Dealing with grief and a cross-country move, Josh is in serious need of a loyal friend, so who better than Buddy the dog?

When Charlie the dog cheats death in All Dogs Go to Heaven, he uses his second chance at life to help an orphaned girl who can speak to animals. However, his intentions aren't as pure as they seem, as he's only drawn to help the girl to earn back his key to heaven.

All of those stories about a family learning to love a scruffy mutt had to start somewhere, and Old Yeller is one of the earliest examples of this. With his father away from their Texas farm, a boy takes in a stray dog, and he and his family learn how to love it despite all of its shortcomings.

Based on the award-winning book, Because of Winn-Dixie focuses on a young girl trying to adjust to life in a new town. While on a lonely walk through the local Winn-Dixie supermarket, she finds a stray dog that she names after the store. Winn-Dixie's outgoing spirit attracts neighbors and encourages them to open up to each other.

Loosely based on a true story, Balto introduces the titular dog who is ostracized in his Alaskan village for his half-wolf background. When many of the town's children fall ill, Balto joins the team of sled dogs retrieving medicine, but he's soon separated from the pack and left to make his way through the wilderness.

Also leading to a handful of sequels, Beethoven tackles the familiar territory of a dad and his family attempting to reel in their rambunctious dog. As with most family comedies involving a dog, Beethoven the St. Bernard eventually saves the day, but before his shining moment arrives, his humans are in for several messy circumstances.

Eight Below takes viewers to Antarctica, where researchers are preparing for a final expedition in the area. Their trip requires the help of a sled dog team, but disaster strikes, forcing the humans' evacuation and leaving the dogs behind on their own. If that incinerator scene in Toy Story 3 makes you sob, watching these dogs rely on each other will definitely create the same effect.

Although the character of Lassie has sparked several films and TV shows, this adaptation is based on the book Lassie Come-Home. After a struggling miner sells his son's dog, Lassie, to make ends meet, Lassie eventually escapes her new owners' vacation home to return to her original family. While most people probably think of Lassie as a very American story, this film has the titular character embarking on an epic journey across the Scottish Highlands.

Hachi: A Dog's Tale might be the ultimate example of dog as man's best friend. Commuting professor Parker takes in Hachi, a Akita Inu, after finding him at his local train station. The two form a bond, and Hachi arrives to meet Parker's homecoming train every day. Even after Parker unexpectedly dies at work, Hachi continues to show up for his usual train, teaching a lesson about love and loyalty to the rest of town.

Even Tom Hanks couldn't resist a role involving dogs. His cop character Turner is suddenly handed ownership of Hooch, a Dogue de Bordeaux, prompting Turner's struggles in adjusting to such a major responsibility. Their bumpy start ultimately segues into a crime-fighting partnership that has a teary conclusion.

Set in 1930s Oklahoma, Where the Red Fern Grows follows a young boy saving money to buy his own hounds that he later trains to hunt raccoons. Just as there are plenty of movies about dogs paired with adults, there are just as many about dogs paired with kids, but each one definitely has a unique selling point. If you happened to grow up where dogs helped with hunting or farming, Where the Red Fern Grows might be for you.

Essentially Romeo and Juliet with dogs, Lady and the Tramp pairs a pampered house pet with a street mutt when they unexpectedly meet and fall in love. When her owners leave her in the care of a relative, Lady escapes and embarks on a grand adventure with Tramp, but like most people (or dogs) who become attracted to someone unlike themselves, Lady faces a learning curve.

Based on Phyllis Reynolds Naylor's novel, Shiloh details a boy's mission to rescue a Beagle from its abusive owner. Adults intervene in his plans, reminding him the dog Shiloh belongs with his rightful owner, but young Marty persists.

Like Valentine's Day but with pets, Dog Days shows how a dozen people and their dogs are intertwined. In addition to emphasizing how having a dog impacts one's life, the movie has a star-studded cast including Finn Wolfhard, Ron Cephas Jones, Vanessa Hudgens, and Eva Longoria.

What do pets do when their humans aren't home? The Secret Life of Pets answers that question when Max the terrier clashes with Duke, a stray his owner has taken in. Their feuding leads to them getting lost without their collars, meaning they have to rely on each other to find their way back home.

Can anyone stay strong during a movie about a dog getting separated from their owner? Bolt shows the titular dog starring in a TV show alongside his owner Penny, but Bolt is unaware the situations they face and his "superpowers" are produced for television. His incorrect belief that Penny has been kidnapped leads to him being dumped in the real world, where he learns he's actually powerless.

If you ship your dog with another pooch in the neighborhood, Pongo and Perdita's romance in 101 Dalmatians is for you. When the dogs start eyeing each other on walks with their humans, they instigate a meeting, prompting owners Roger and Anita to fall in love. If Roger and Anita's bond won't make you tear up, the dogs' quiet pairing certainly will.

Calvin is used to getting his way in Life Is Ruff. When he learns that elite dog shows offer the hefty prize money he needs to buy a special-edition comic book, he seeks to find and train his own dog for the competition. When it comes to the dog's storyline, this Disney Channel Original Movie won't exactly inspire waterworks, but the nostalgia of seeing stars like Kyle Massey and Mitchel Musso may bring out a tear or two.

Like Eight Below, Snow Dogs introduces a team of sled dogs that Miami dentist Ted inherits from his Alaskan birth mother. While a chunk of the story is dedicated to physical comedy, Ted discovering his family history in his mother's hometown leads to sweet moments with both the dogs and his biological father.

Nothing is better than a day spent with your dog, but if you need an extra incentive to cuddle up with him or her, watching a movie starring their own kind sounds perfect.

More like this
The Best Movie Soundtracks Were So Good, They'll Live On Forever
By Brandy Robidoux
10 Rainy Day Movies To Watch On Netflix That Are Perfect To Pass The Time
By Kristen Perrone and Lexi Williams
These Songs About Loving Yourself Need To Be On Your Playlist
By Michele Mendez
Stay up to date