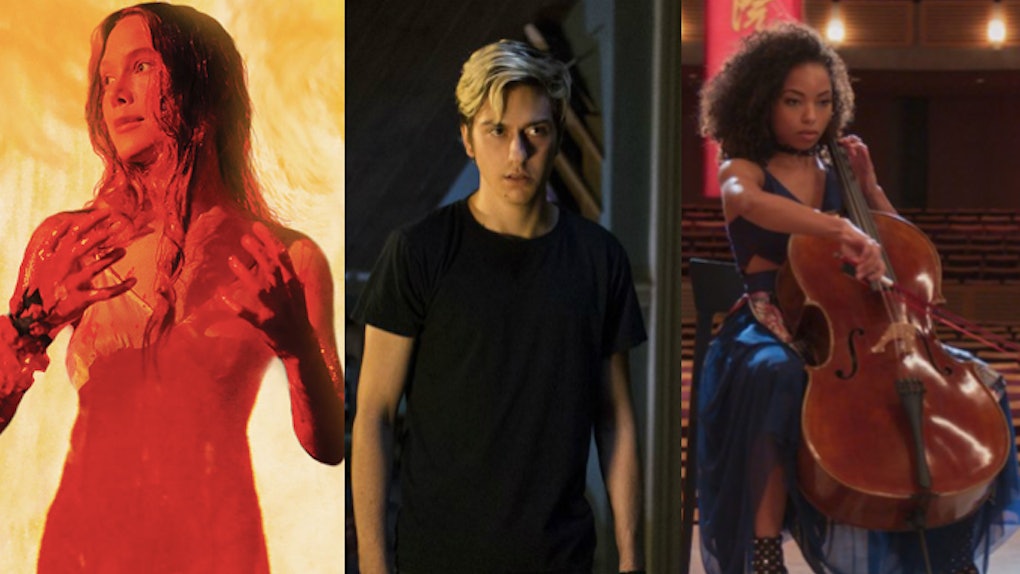 It came on fast, but fall is already here. And that means it's time to start thinking ahead to pretty much everyone's favorite fall holiday: Halloween. Halloween is just one day, but there's an entire season's worth of festivities to pack into the weeks leading up to it. One of the best ways to get in the Halloween spirit is with a good, old-fashioned scary movie marathon. Here are 21 scary movies on Netflix for Halloween 2019 that will give you plenty of frights and delights.

Haunted houses and chilling late-night hay rides might be how some people choose to celebrate Halloween. But why go though all that trouble when you can have all the same frightening fun from the comfort of your own couch, for free? Netflix is filled with all kinds of scary movies, from classic slashers to modern thrillers. There are even some options that find a way to mix comedy and horror by squeezing a few laughs in between all the gore. No matter what type of scary feature films you prefer, there's sure to be something for you on this list of scary Netflix movies. So plop onto your couch, grab some candy corn, and get ready to scream.

The titular creatures in this 1980s classic look cute... that is, as long as you don't feed them after midnight.

It's the self-aware slasher movie that sparked an entire franchise. If you're in the mood to continue screaming after this flick, you can find its sequels also on Netflix.

Based on a true story, this movie is like one long Ghost Hunters episode, only a whole lot scarier.

The only thing scarier than a high school full of mean girls is the revenge a telekinetic outcast exacts on her bullies.

After a mysterious monster attacks New York City, some found-footage video tape is all that's left to help explain what happened.

When the main villain is a character named Leatherface and he leads a band of cannibals, you know you're in for some real gore with this slasher classic.

This psychological thriller is a bit subtler than its gorier slasher counterparts, but that doesn't mean Allison Williams and the rest of the cast won't give you some bone-chilling frights.

Becoming a vessel for ghosts isn't your everyday kind of problem, but it sure makes for some true horror in this movie.

Breakups are never easy. That's especially true when your ex invites you and your new partner over for an awkwardly tense party that takes a dark turn very quickly.

The game "truth or dare" gets taken to a whole new level when a group of college students realize that their dares have horrible consequences.

What happens when you mix an Ouija board séance with a solar eclipse? In this Spanish-language movie, some demons come out to play.

In the 17th century, fear about witches was everywhere. In this movie about a family of pilgrims trying to escape what they believe to be a witch's possession, that fear becomes true terror.

A group of college friends take a trip deep into a mysterious Scandinavian forest. What could possibly go wrong? It turns out, a whole lot.

Kidnappings, cults, and spooky rituals: This movie is jam-packed with all the horror buzzwords you could want.

Based on Stephen King's 1992 novel of the same name, this movie digs into a woman's psychological horror after she's trapped in the house where her husband just died.

Strange houses have the potential to be haunted, and that's what a teenager (13 Reason Why leading man Dylan Minnette) and his mom discover in this flick.

This Thai horror movie tells the story of a photographer and his girlfriend who, after killing someone in a hit-and-run accident, discover disturbing images in developed film.

Sometimes the most dangerous people are the ones you would least suspect. That's definitely the case in this Korean slasher film that focuses on a quiet guy who goes after his coworkers.

This one's perfect for Halloween since it's set the night of the holiday. Art the Clown celebrates Halloween by stalking and terrifying a group of girls... and anyone else who gets in his way.

After a boy finds a supernatural notebook that can help him fight death, he ends up having to deal with a lot of evil forces.

If you're looking for a little comedy sprinkled in with your frights, then this is the pick for you. A guy learns that his girlfriend has returned from the dead, but a lot has changed since she entered the afterlife.

So, there you have it. These Netflix films are sure to give you the fright you need to get into the spooky spirit. Happy Halloween!