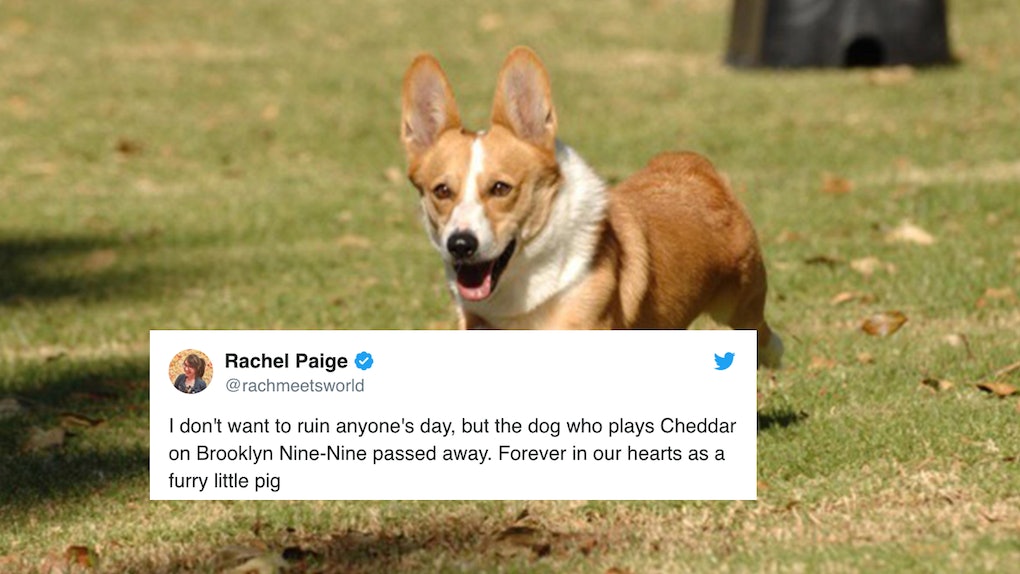 Celebrity deaths are always rough. It's easy for fans to get attached to the personalities they see on-screen, so it's often sad to have to say goodbye to them. Sometimes those deaths can be even harder when the celebrity isn't even human. After all, the death of a dog is one of the saddest things ever, and it gets even sadder when it's a canine that people know and love. Stewart the Corgi, who is best known for playing the dog Cheddar on Brooklyn Nine-Nine, has sadly passed away at the age of 13. He was always a fan-favorite and a truly good boy, so it's an understatement to say that fans everywhere are deeply saddened by the news. Some especially heartbroken fans took to Twitter with some tweets mourning Cheddar the Dog from Brooklyn Nine-Nine.

News of Stewart's passing broke when his owner posted about it on Instagram, including a photo of Stewart in a wagon with the words, "My precious boy Stewart crossed the rainbow bridge today." The post went on to say:

We went to the beach (his favorite place) where he frolicked in the surf and then enjoyed a picnic lunch of In & Out burgers. We relaxed in the sun and just enjoyed each other’s company. Our veterinarian met us there later and Stewart went to sleep peacefully in my arms while listening to the sounds of the ocean. He was a one in a million kind of dog, he was my supaah staah.

It sounds like Stewart had a beautiful last day surrounded by people and things he loved. Nevertheless, fans are still deeply in mourning over the loss of such a nice pup. In fact, fans on Twitter seem to be taking the news very hard.

Other fans are just grateful to know that he had a peaceful and happy goodbye with his owner. Stewart's trainer Michael W. Miliotti told Entertainment Weekly that Stewart was a goofball of a dog who would often make mistakes "over and over again just because he can get the laugh.”

Some fans are insistent about the fact that Stewart/Cheddar deserves as much respect as possible. After all, all the greats are mourned long after they're gone, and Stewart was one of the best.

Cheddar was the dog/adorable sidekick of Captain Raymond Holt (Andre Braugher), and although he was played by multiple dogs throughout the series' run, Stewart played him the longest. Some fans are concerned that the show won't be the same without Stewart's happy presence there anymore.

The truth is, even though Stewart is gone, Cheddar is still going strong on Brooklyn Nine-Nine — not counting that time he passed out from eating Jake (Andy Samberg) and Amy's (Melissa Fumero) Nakatomi Plaza wedding cake. Cheddar will likely be replaced by another canine actor, and a lot of fans are already prepared to meet the new Cheddar with a Brooklyn Nine-Nine quote as a response.

Season 7 of Brooklyn Nine-Nine premieres this fall on NBC (hopefully with an appropriate tribute to Stewart).