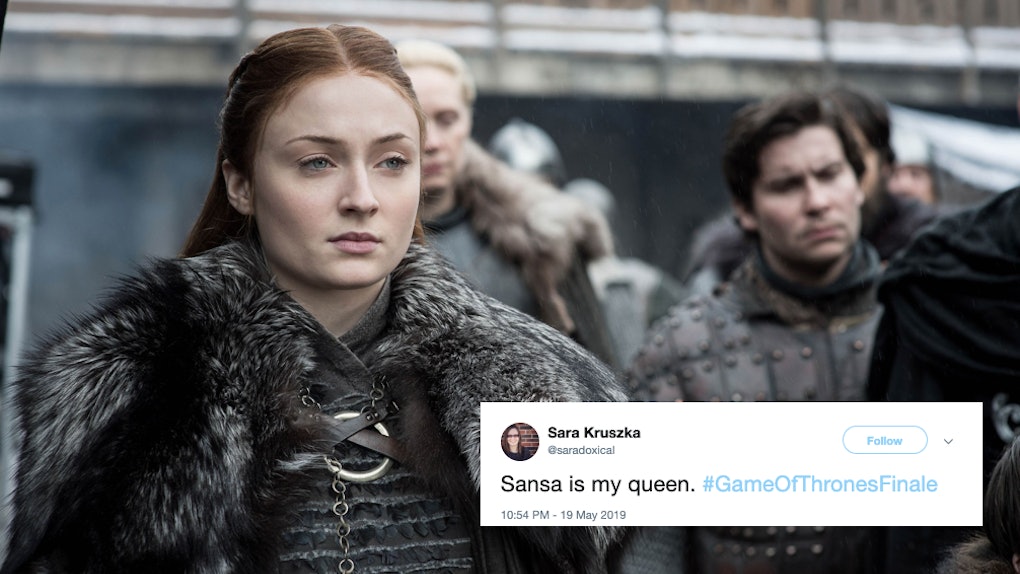 The series finale of Game of Thrones premiered on Sunday, May 19, and as the show closes out for good, Westeros has a completely different power structure than it did back when it started in 2011. One of the biggest changes on the show and one of the most satisfying wrap-ups is Sansa Stark's ultimate fate. These tweets about Sansa Stark being queen in the North on Game of Thrones are all about the positive vibes.

The series finale of Game of Thrones was filled with countless twists, turns, and surprises that received both positive and negative reactions from fans. But one of the most satisfying character outcomes came within the first hour and focused on Sansa Stark, one of the characters who has experienced arguably the most pain and suffering throughout the series.

After Daenerys was stabbed by Jon Snow, the leaders of the remaining houses were shown making a decision about crowning a new king or queen. Eventually, the council, swayed by a speech by Tyrion Lannister, decided to name Bran Stark the king of Westeros — but Sansa declined to let the North be ruled by him. She told her little brother she loved him but that the North would remain independently ruled as it had been for centuries, officially making her queen in the North. In an epic montage later in the episode, Sansa is shown walking through her kingdom as men and women kneel before her. Eventually, she's shown being crowned queen.

If you've been a Sansa stan from day one like I have, these 20 tweets about Sansa becoming the queen in the North will resonate so, so much.

Seeing Sansa in the North sitting as queen was probably one of the best moments of the finale. A lot of the Game of Thrones characters are complicated — one season you hate them, and then you love them (example: Jaime Lannister). Or, one season you love them, and then you hate them (example: Daenerys Targaryen). But Sansa Stark was always a character that viewers rooted for, even when she was married to the horrific King Joffrey. It's nice to see that through everything she went through, she got a happy ending.

Actress Sophie Turner, who played Sansa, opened up about how much the character meant to her before the finale premiered on Sunday, May 19. She posted two set photos to Instagram with a caption reading, "Sansa, Thank you for teaching me resilience, bravery and what true strength really is. Thank you teaching me to be kind and patient and to lead with love. I grew up with you. I fell in love with you at 13 and now 10 years on.. at 23 I leave you behind, but I will never leave behind what you’ve taught me. To the show and the incredible people who make it, thank you for giving me the best life and drama lessons I could have ever asked for. Without you I wouldn’t be the person I am today. Thank you for giving me this chance all those years ago. And finally to the fans. Thank you for falling in love with these characters and supporting this show right through till the end. I’ll miss this more than anything."

OK, now I'm crying. All hail the queen in the North!