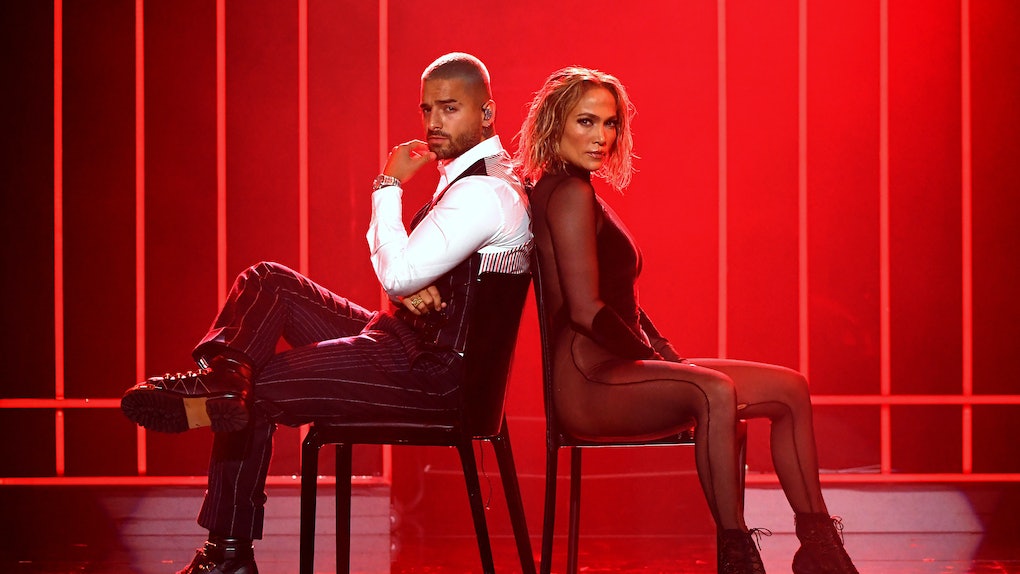 The American Music Awards are all about creating moments and, on Sunday, Nov. 22, fans were in for a real surprise: Jennifer Lopez and Maluma collaborated for an extremely steamy performance. Fans were thrilled to see two of the biggest Latin artists come together to create some musical magic. These 20 tweets about Jennifer Lopez and Maluma's sexy 2020 AMAs performance show viewers got way more than they expected.

The duo performed their new singles "Pa' Ti" and "Lonely," from Lopez's upcoming romantic comedy film, Marry Me, set for release in May 2021. The stars dropped the songs on Sept. 24, along with a cinematic, two-part music video starring J-Lo as a corrupt billionaire and Maluma as an undercover FBI agent. The clip blew fans away due to the stars' onscreen chemistry and the twists and turns the storyline took.

Since the MV was so romantic, fans couldn't wait to see how Lopez and Maluma would bring the heat at the AMAs. Let me tell you, they didn't disappoint because their performance really had fans sweating. I mean, J-Lo and Maluma were literally all over each other. Take a look at some of the steamiest moments below.

Fans' reactions to the performance were everything. "Maluma, J Lo, that performance was not socially distant," one fan tweeted.

"Six feet apart, Jennifer Lopez and Maluma. Not six inches," someone else pointed out.

Fans were fanning themselves because the chemistry was truly on fire. "That was hot. I'm not mat at all at that J. Lo/Maluma performance," another fan wrote.

The performance marked Maluma's debut AMAs stage. "I feel like it’s such an honor to be Latin, and be here," the singer said about his appearance in a backstage interview with Radio.com. "It’s a beautiful story that I’m going to tell to my children. For the first time, performing here with Jennifer Lopez."

Fans are definitely not going to be forgetting J-Lo and Maluma's performance any time soon.