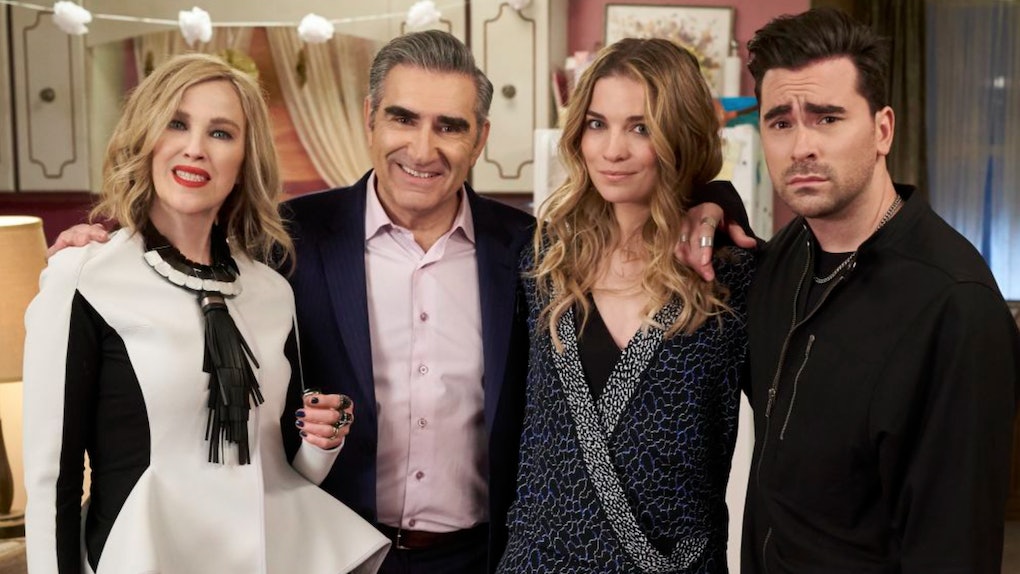 The funny thing about Schitt's Creek is... pretty much everything. From the name of the town to the quick-witted dialogue, the CBC sitcom warmed viewers' hearts while simultaneously making them double over in laughter. While no other show can quite compete with the series, there's a good chance you'll find similar vibes, character arcs, and comfort in other shows like Schitt's Creek that are out there, just waiting to be loved.

When its first episode premiered in early 2015, Schitt's Creek mostly flew under the radar. However, over the years, as diehard fans spread the word about the joys of the show, it gained more and more of a following. The Schitt's Creek craze really picked up in 2017 when Netflix gained streaming rights to the series. Then, after the show swept the 2020 Emmys Comedy categories, it was all anyone could talk about — even though its final season has come and gone.

While you can rewatch the six-season hit as many times as you want on Netflix, if you're looking to change things up, you'll find that other shows provide some of the same feel-good charm in different ways. Whether you loved the quirky characters, the small-town vibe, the emotional storylines, or the LGBTQ+ representation, there's something for you. Though these shows might not result in you humming "A Little Bit Alexis" the rest of the day, they're worth a watch between rounds of revisiting Schitt's Creek.

Another Canadian sitcom like Schitt's Creek, Workin’ Moms is a quick-witted comedy about four — ya guessed it — working moms who form a bond in a support group and go through the ups and downs of parenthood together. If you loved Schitt's Creek's mix of honesty and quit-witted dialogue (plus LGBTQ+ representation and lots of sex), you'll immediately fall in love with the cast of this seriously funny series.

Whether you watch the original or the U.S. remake, The Office is one of those shows that are impossible not to love. While the U.S. version spans much longer (9 season in total versus the UK original's three seasons), both offer humor, humility, and fantastic writing that will constantly remind you of Schitt's Creek and leave you clutching your stomach in laughter.

If you're a fan of oddball characters, the locals of Pawnee, Indiana, will surely fulfill your thirst for funny situations and heartwarming lessons. While there's a good chance you've already seen Parks and Recreation starring Amy Poehler (and from the minds behind of The Office (U.S.), if you somehow haven't, this is your official order to watch the political satire while chowing down on breakfast food ASAP.

If you love shows that deal with tough topics in lighthearted yet honest ways, Dead to Me will delight you — even though the premise of the series is centered around death. The series, starring Christina Applegate and Linda Cardellini, explores the act of moving on after losing someone you love with plenty of dry jokes to drive the story. Both seasons are on Netflix and the third and final installment is projected to be released sometime in spring 2021.

Take the virtual trip to Stars Hollow, where quirky characters deal with love, heartbreak, death, and family drama all against the backdrop of small-town charm and witty dialogue. The coffee-loving characters on Gilmore Girls are no strangers to laughing in the face of adversity and overcoming obstacles together, just like the Rose family.

Another Pop TV gem, One Day at a Time is a comedy-drama inspired by the 1975 series by the same name. The premise follows a newly single Army veteran (Justina Machado) as she raises her family through the good and the bad. If you're in the mood to laugh, cry, and gasp at your TV just like you would with Schitt's Creek, look no further.

When Dre Johnson (Anthony Anderson) begins to question the cultural assimilation of his family, he decides to make some changes. The humorous journey the Johnsons go on in Black-ish is not only side-splittingly funny, but culturally and emotionally important as well.

Kim's Convenience, another Canadian sitcom, follows a similar formula as Schitt's Creek: A close-knit family in a low-income neighborhood grapples with the highs and lows of life together. While there are some differences (the Korean family owns a convenience store as opposed to a motel), the heart of the series will feel familiar.

Tina Fey’s satirical series, 30 Rock, is not only known for its celeb-studded cast (Tracy Morgan, Alec Baldwin, and Jane Krakowski all star, just to give you an idea), but the snappy dialogue, lovable oddballs, and sense of community will make Schitt's Creek fans feel right at home.

Arrested Development is a classic sitcom with an interesting story, both on-screen and behind. The series starring Jason Bateman, Will Arnett, Michael Cera, and Portia de Rossi follows the spoiled Bluth family after the head of the household, George Bluth Sr. (Jeffrey Tambor), is sent to prison. While the first three seasons were filmed in early 2000, the last two were filmed over seven years later, which somehow adds to the overall hilarity of the show.

A blended family, diverse characters, LGBTQ+ representation, and plenty of moments that will make you laugh and cry, Modern Family has everything Schitt's Creek fans could want, including lots of snappy comebacks and clever jokes. Plus, watching Sarah Hyland be sassy on-screen is reason enough to devour this well-loved series.

BlackAF hails from the creator of Blackish and is a fictional look at the life of Kenya Barris (played by the real Kenya Barris) and his family — including The Office and Parks and Rec's Rashida Jones — as they navigate success, culture, and being Black in Hollywood.

If you ever wondered what it would be like if you were a part of an underground cult for 15 years before discovering what the modern world was like (just me?), there's a good chance you'll love Unbreakable Kimmy Schmidt. Ellie Kemper, Tituss Burgess, and Jane Krakowski all star in this heartwarming comedy written and created by Tina Fey.

If you love how Schitt's Creek pulls a whole bunch of different personalities together to create an unbreakable bond, you'll dig the vibe of New Girl. The series made household names of faves like Zooey Deschanel, Jake Johnson, Max Greenfield, and Lamorne Morris, and will leave you laughing and falling in love with all the likable characters.

While middle school might not have seemed funny while you were in it, watching it back is actually hilarious. Comedic geniuses Maya Erskine and Anna Konkle playing teenage versions of themself while surrounded by actual teenagers in Pen15 is exactly what your Schitt's Creek-missing heart truly needs.

Imagine you make it to The Good Place after you die, only to realize you were put there by mistake. When Eleanor Shellstrop (Kristen Bell) finds herself in this predicament, she has to figure out how to navigate her unearned afterlife. If you loved the dry jokes, strong sense of community, and thought-provoking storylines in Schitt's Creek, you'll feel like you've died and gone to heaven with The Good Place.

While you might not think watching politics unfold in a fictional capacity would be funny, Julia Louis-Dreyfus as U.S. VP Selina Meyer in Veep might be exactly what you need when real politics get too frustrating. Tony Hale, Anna Chlumsky, and Timothy Simons round out the main cast of charming-yet-strange characters you'll fall in love at first watch with.

Drew Barrymore and Timothy Olyphant star as married realtors whose lives change when Barrymore's Sheila accidentally becomes undead and develops a taste for humans. Expect to spend your time watching Santa Clarita Diet laughing and cringing, since this show is hilariously gory and downright sinful.

If you're a fan of medical dramas as well as hilarious sitcoms, The Mindy Project, written by and starring Mindy Kaling, will fulfill your need for funny drama and winding love stories. The inter-office romances and snappy comebacks (like Kaling was famous for as her character Kelly Kapoor in The Office) make this Hulu series a must-watch.

One of those shows you've either watched and loved or just heard about for years, Weeds follows widow Nancy Botwin (Mary-Louise Parker) as she starts growing and selling marijuana to make ends meet after her husband's death. The series has the humor, small-town drama, and fun cast of characters Schitt's Creek fans will love, mixed with the crime and illegal elements seen on Breaking Bad.

Whatever component you loved most about Schitt's Creek, there's a good chance there's a series on this list that will fill the void the Rose family left.