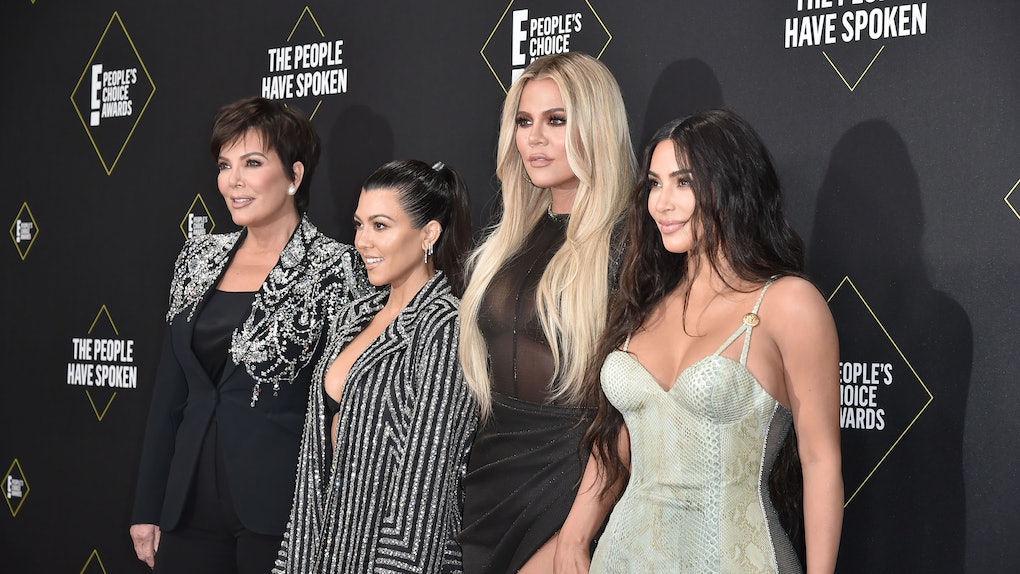 They’re sisters by blood but best friends by choice. If you've watched a single episode of Keeping Up With The Kardashians, visited their Instagram pages, or even peeked into their personal brand collaborations, you know just how close the Kardashians really are. The family is thick as thieves, and even their children, undoubtedly the next generation of reality stars, are already best friends with one another. But even the closest families fight sometimes, and the Kardashian Klan is no exception — and just like everything else they do, this family hits hard when it comes to drama. Here are 20 of the most dramatic fights on KUWTK to remind you that your family is tame in comparison.

The reasons for their altercations vary. They range from the ever-relatable ones, like fighting with your sister because she won't let you borrow something from her closet, to slightly more Kardashian-esque ones, like being mad that your sisters aren't as excited about your very luxurious vehicle purchase as you are. Luckily, so far, none of the fights have caused permanent rifts between the sisters. So, everyone can re-watch some of these juicy moments below, totally guilt-free. In a sweet addition, they can relive quotes that have become pop culture's most iconic moments.

One of the first fights on the iconic reality show is also one of its biggest. In Season 2, Episode 15, Kim was very excited about getting a Bentley, but all the car chatter wasn't sitting right with Khloé. After listening in on some of Khloé's less-than-supportive comments, Kim, armed with her purse, confronted her sister and delivered a line to remember: "Don't be f*ucking rude."

2. Khloé & Kim vs. Kourtney: The Hamptons

The reality show has had a bunch of spin-offs throughout its 17 seasons, one of them being Kourtney and Khloé Take The Hamptons, which filmed in 2014. That's when this particular altercation occurred. Kourtney confronted her sisters for leaving a lot of alcohol out around Scott, after a night of partying. Khloé did not take the criticism well, yelling back that she never wanted to come to Hamptons in the first place.

In Season 14, Episode 19, the sisters visited San Francisco. During a boat tour around the Alcatraz Prison, Khloé got angry with Kourtney for being on her phone their entire getaway, instead of participating in sisterly activities. It resulted in a major screaming match on the boat.

This was one of the most tumultuous brawls in the show's history; it spanned multiple episodes and took quite a toll on the sisters' relationship. In the Season 15 premiere, Kourtney and Kim got into a huge fight over their Christmas card shoot schedule. Kourtney refused to stay past a certain time, which infuriated Kim. She proceeded to call her older sister "the least interesting to look at," which drove Kourtney to tears.

After leaving the makeup room following Kim's hurtful words, Kourtney gave Khloé a call. Kourt was audibly upset, calling Kim an "evil human being," and saying that she will stop communicating with her family all together if they keep mistreating her.

As of November 2019, Kim and Kourtney's latest fight was over candy. Healthy-eating enthusiast Kourtney has always been very strict with her and her children's meals. So, she was really opposed to the Candy Land-themed birthday party Kim wanted to throw their daughters. The fight escalated so much that for a split second, the two decided to hold separate birthdays for their kids. Luckily, they reconciled, so North and Penelope got to celebrate their birthdays together, after all.

The matriarch of the family is rarely anything but a mediator in her daughters' quarrels. But this time, Kris Jenner was the one in the hot seat. In the Season 12 premiere, Hollywood's most famous momager didn't take her daughters' criticism of her parenting style well. After being accused of coddling her son Rob, Kris responded to her daughters with a list of their own missteps. "You guys can do anything you want, and it's OK, and I'm supposed to accept it all," she said, "I'm going to do the same thing for [Rob]."

Khloé and Scott are basically BFFs now. They're constanly pulling pranks on Kris together and having a grand ol' time. That's why it's easy to forget their relationship wasn't always so loving. Back in Season 4, Episode 3, the two got into a major fight after Khloé slapped Scott. The family didn't react well, and Khloé was sent to anger management. There, she delivered the iconic line: "He's a douche lord and I hit him."

OK, so this brawl doesn't technically involve any of the Kardashian- Jenners. But Scott Disick has arguably become a member of the family, so his nasty altercation with a waiter is worth a trip down memory lane. During the family's trip to Las Vegas, Scott got so drunk that he shoved a dollar bill into a server's mouth. It wasn't a pretty site.

In Season 17, Episode 3, Scott really got into it with Kris' boyfriend Corey Gamble. After telling the dinner table that her daughter Penelope recently scratched their nanny, Kourtney was stunned by Gamble's reaction, who said he would "whoop [Penelope's] ass" if she ever tried to scratch him. The remark shocked Scott, who immediately jumped in to defend his daughter.

In Season 13, Episode 9, an angry Khloé spilled water on Scott's pants after he brought a girl to the family's 4 -day Costa Rica trip. The incident was equal part funny, badass, and dramatic

In Season 13, Episode 8, Scott accompanied Kim and her friends to Dubai and, on one night, invited a mystery woman back to his hotel room. Kim found out about their sleepover the morning after though, sought out Scott's guest and, after calling her a "tramp" and a "wh*re," ordered her to immediately leave.

This fight happened as the youngest sisters of the family got ready for the ESPYs. Kendall wanted to borrow Kylie's dress, who wasn't feeling particularly generous with her wardrobe. "I'm sorry your mom's such a c*nt," Kendall told one of Kylie's dogs before leaving for the ceremony.

Finding out someone re-gifted your present always stings, but when that someone is your brother and the present was an iPad, I bet it stings even more. That's what happened to Kendall in the Season 12 premiere episode. And let's just say, she did not just casually brush off the news of Rob giving away her gift.

It got really heated between Rob and Kim in Season 6, Episode 12. During the family's vacation in Bora Bora, the siblings got into it when Kim accused Rob of having no career aspirations. Kim called her brother "a loser," and Rob responded by calling her "a wh*re." Kim's then-boyfriend, Kris Humphries, quickly came to his girlfriend's aid, which escalated things even further.

Jonathan Cheban often appears on KUWTK – he's Kim's BFF after all. And Malika Haqq is Khloé's best friend, who appears probably just as often. So, when the two got into a fight, the sisters were quick to chime in, defending their besties, and creating even a bigger mess.

The once-married couple never actually got into a face-to-face argument on the show at this point, but they had a major falling out after Caitlyn Jenner's transition and the release of her tell-all memoir. The former Olympian wrote a lot of shocking things in her book, The Secrets Of My Life, that not only hurt Kris' feelings, but were also reportedly lies.

How often do you hear someone yell, "I don't want to be in your video game!" during a fight? That was just the opening line to Kim and Kourtney's quarrel in the second episode of Season 10. The fight was relatively harmless, until Kim delivered one of the show's most iconic burns: "I'm not buying her a f*cking pair of shoes," she said, referring to Kourtney, "I bought her a f*cking career."

Let's go back to the older days for this little gem. In Season 2, Episode 8, Kim, who was already upset over having to attend a family trip to Colorado, was pushed over the edge by Kris, who confiscated and tossed her phone over her shoulder. As payback, Kim grabbed the momager's cell and threw it from the second floor balcony.

You may have forgotten, but once upon a time, the Kardashians owned a clothing store named Dash. As the reality show and the sisters' personal brands grew, the store became a second-tier priority and in the Season 12 premiere, Kim suggested they sell it to a department store. When Kourtney expressed her desire to keep Dash in the family, Khloé disagreed with her in a major way.

More like this
These Songs About Loving Yourself Need To Be On Your Playlist
By Michele Mendez
These Fake 'Riverdale' Brand Names Are Even Better Than The Real Thing
By Rachel Varina
The Best Movie Soundtracks Were So Good, They'll Live On Forever
By Brandy Robidoux
Stay up to date