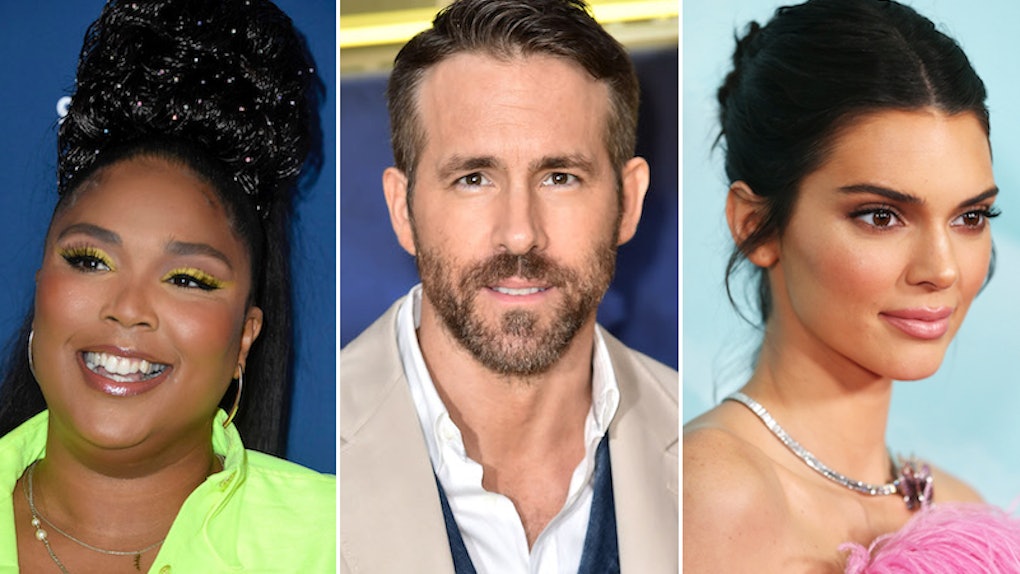 20 Celebrity Bottle Cap Challenge Videos That Are So Epic, You'll Doubt They're Real

The internet is a weird place, especially social media. It's full of helpful, exciting information and downright mind-numbing nonsense, and I put the #bottlecapchallenge somewhere in between. Does it make me feel awesome to watch Lizzo karate chop a water bottle? Yeah. Does it make sense to put my workday on hold to watch Ryan Seacrest spin around in a chair? Not really. But these 11 celebrity bottle cap challenge videos are chilling on my browser anyway and I won't apologize for it.

It will take you about two videos to get the gist of the challenge. The idea is to loosely place a twist cap on top of a steady bottle. Then, simply do a back-kick that nicks just the top of the cap. This, in theory, will cause it to spin right off. The challenge is considered successful when the cap comes off but the bottle stays put. Similar to other social media challenges, the idea is to nominate other people to give it a go, who will then attempt to up the ante and top the person who nominated them until, eventually, people are kicking bottle caps on a cliff three million miles in the air and their lives for the sake of a cool bottle cap challenge video. OK, I've gone off track...

Anyway, it's always fun when famous people participate in these kinds of activities because then they nominate other famous people to try it out, too! Sure, everyone has their own rendition and spin (pun intended) on the #BottleCapChallenge, but that's part of what makes it so fun.

Mayer totally nailed it, and his red kicks are awesome AF. The blue steel face to camera at the end makes this video particularly "cool guy," which I feel like is kind of his thing?

Oh, OK, Hailey Baldwin. Can you guys please get a load of this truly magnificent ATV rendition?

Bieber was clearly in the same location as his wife when he knocked his challenge out of the park — er, off the top of the bottle. (You guys get what I'm going for here.)

Jenner was nominated by Baldwin and she Baldwin's her ATV video and raised her a jet ski video. Jenner's super-long model legs skipped the cap off with professional grace and ease (she retrieved the cap from the water, FYI)!

Naturally, queen Mariah had to up the ante. While I would have been impressed as hell if she went for the spin-kick, her using her vocal range to spin the cap off of the bottle is an "on-the-nose" take from this music diva.

Reynold's opted for a super cinematic, highly produced product placement for his gin brand, Aviation. Funnily enough, he ends up destroying the product at the end.

My girl. Lizzo gives the challenge two solid tries. She definitely connects in her second kick, but unfortunately ends up splashing water all over her friend's computer!

Diplo hilariously took it upon himself to try the challenge after complaining no one nominated him (he's looking at you, John Mayer). He wrote in his caption: "Since no one requested me to do this (@johnmayer) and also since no one thinks I'm good at anything except pushing button on stage .. here is evidence that I also do karate."

Goulding attacked her cap with the focus and precision of a professional athlete. (Plus, that hair flick, babe.)

They say friends always have your back, and for Heidi Klum's #BottleCapChallenge video, her Project Runway co-star Tim Gunn did just that. Swipe through to see just how many tries Klum had to make before she got it right!

Note to self: Don't try the #BottleCapChallenge with a bottle full of vodka, or else you'll end up in tears like Blake Shelton.

OK, this was a hilarious epic fail. Instead of hitting the cap, O'Neal hit his friend right in the face. Ouch!

Swae Lee just had to #HitTheWoah, too.

I just love how these videos bring out celebs' unique talents, like Alexander Wang, who managed to knock the bottle cap off not with his foot, but with his hair. Yes, his hair.

Instead of actually doing the #BottleCapChallenge, Phoebe Tonkin took the opportunity to remind everyone to trade their plastic water bottles for reusable ones. Although I was waiting for her to knock the bottle cap off, I think saving the planet is a little more important.

Oof. They should really put a warning for friends who help in the #BottleCapChallenge, because just like Shaquille O'Neal, Baekhyun accidentally hit his friend Chanyeol in the process of attempting the challenge, not the actual bottle cap.

Like I said, the challenge is fun for everyone except the person holding the bottle.

Last but not least, here is Seacrest doing what I think is the bare minimum to complete the challenge, but complete it he did.

No one has nominated me yet (thanks for nothing, John Mayer) but that won't stop me. Stand by, Hailey Baldwin. I'm coming for you.

*Googles how to rent a helicopter.*