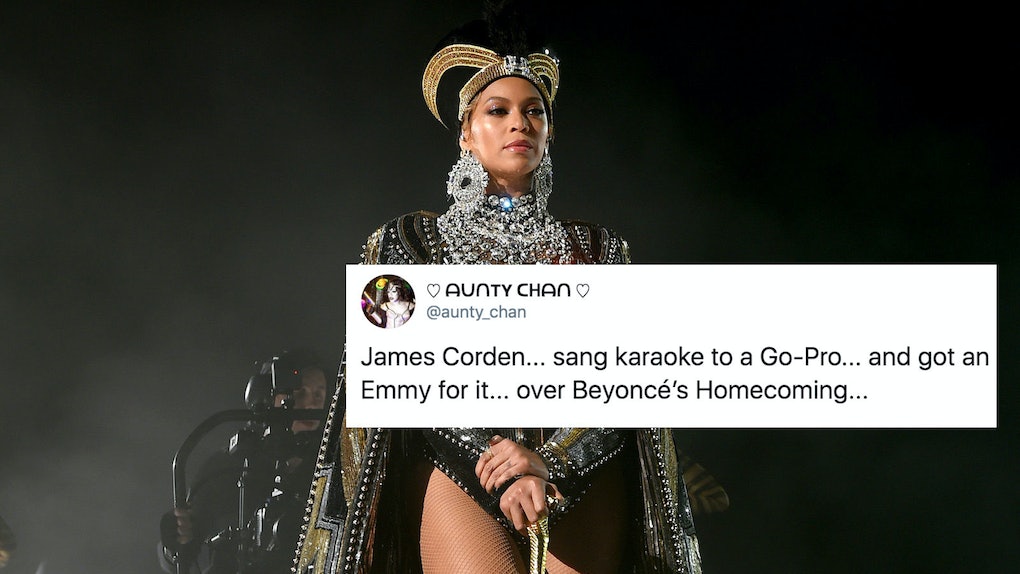 There is no denying the fact that Beyoncé's 2018 Coachella headlining performance instantly became a seminal moment in pop culture, and her subsequent Netflix documentary Homecoming cemented the concert even more in its iconic status. However, despite earning rave reviews from both critics and viewers alike, Homecoming won none of the six Creative Arts Emmys it was nominated for this year. Of course, Beyoncé fans were not happy about the singer's total shutout from the awards ceremony, and these tweets about Beyoncé's Homecoming Emmys snubs lay out exactly why the lack of recognition felt so maddeningly confusing this year.

All six of the categories Beyoncé's Homecoming was nominated for were announced at the Creative Arts Emmy Awards over the weekend, but to the shock of many, the concert documentary did not even win one award. For some of the categories, the loss was understandable. For instance, Homecoming lost the Outstanding Writing in a Variety Special category to Hannah Gadsby's lauded comedy special Nanette, and although Beyoncé's outfits in Homecoming were next-level, it could also make sense to fans that the doc lost the Outstanding Costumes award to RuPaul's Drag Race, which has boundary-pushing fashion at its very core.

Specifically, The Late Late Show's separate 23-minute special Carpool Karaoke: When Corden Met McCartney Live From Liverpool, which aired on CBS in the summer of 2018, took home the top prize for variety specials at the Creative Arts Emmys this year — and that was a hard pill for the Beyhive to swallow. After the results of the category were announced, Beyoncé fans (and just regular pop culture aficionados in general) made their feelings known on Twitter, with most claiming it was ridiculous for a 23-minute segment of two men singing in a car to be awarded over a meticulously staged and crafted 2-hour concert documentary that has been called groundbreaking not only for music, but for social change as well.

Among all the tweets, a cameraman for Homecoming named Ben Hagarty also voiced his own disbelief about the Beyoncé special not earning an Emmy. Hagarty highlighted the unseen effort that went into perfectly capturing all the major moments of Beyoncé's performance.

Despite all the work and love that clearly went into making Homecoming, Beyoncé still does not have an Emmy award. The singer has previously been nominated in 2013 for her Super Bowl halftime show, in 2015 for her HBO special On the Run Tour: Beyonce and Jay Z, and in 2016 for her visual album Lemonade. It looked like this was definitely going to Beyoncé's year to finally get an Emmy, but after that total shutout, fans will have to just hold out hope for a little longer.