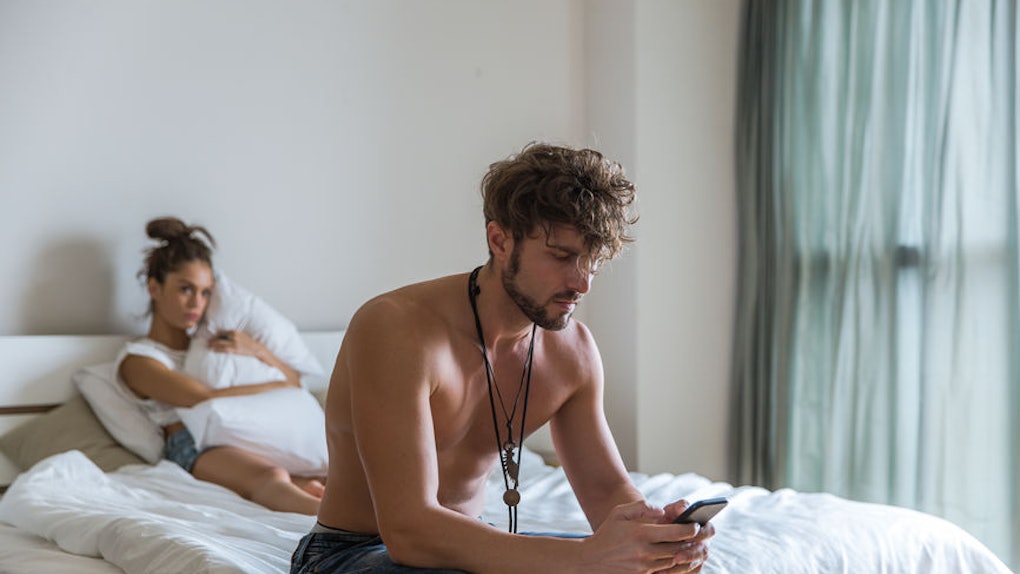 18 Signs Your Partner Might Be Cheating, According To 18 Women Who Have Been There

I'm lucky enough to say that I've never been cheated on but all of my friends who have been cheated on say that, in hindsight, there were signs they totally overlooked. And, I mean, I don't blame them for overlooking! If you're in a happy relationship you usually aren't looking for signs your partner is cheating. But that trust we have for our partners in a happy relationship can unfortunately also be what leaves us with a blind spot if our partners do wind up cheating.

Well, unfortunately, not every relationship is healthy and happy. Sometimes trust can be difficult to hang on to when you’ve got a gnawing feeling that your partner might be unfaithful. But, even when you have that feeling, what are you supposed to do to confirm it? How can you know for sure that your partner is cheating on you? Is there a way to even know? Are there signs other than catching them red-handed in bed with someone else that could mean they’re cheating? Well, in a recent Reddit AskWomen thread, ladies shared the subtle and sometimes not-so-subtle ways in which they realized their partners were cheating on them. Read along and take note.

They turn the tables on you.

Constantly accusing ME of cheating

They go into unnecessary detail when describing their plans.

Giving long drawn out explanations of their upcoming plans similar to stories you'd tell your parents when you were hiding plans with your mates but didn't want them to know what you were really up to.

They completely change their routine.

Totally changing his routine, appearance and habits, whilst accusing me of cheating on him.

They get really defensive.

Him getting really defensive and angry with me, over me simply asking about who one of the various girls texing him was. To me, its not a wierd thing to ask, if you are in a comitted relationship, but he would snap and almost yell at me every time. If its ”just some friend”, why are you getting all worked up, I was just asking..

They lie about hanging out with certain people.

My college boyfriend ended up cheating on me with a mutual friend of ours. They'd been friends for nearly 10 years before I met him (she was the one who introduced us), so I didn't think anything of the two of them going out to grab a drink together. Besides, I was away at school, so it was tough for us to hang out during the week. Whenever he told me they were getting together, I'd just say something like, "Have fun! Tell her I'll give her a call tomorrow!" When he started lying about them hanging out, I knew something was up.

Your gut tells you the truth.

My gut. I left him on his own at a festival for one night, then saw him talking to a girl i didn't know the next day, and i just knew he'd slept with her. Lost the strength in my legs and had to sit on the grass to catch my breath. He lied to my face about it, so i let myself get gaslit. Later, he was on tour, and every time i got a lovey dovey post card or letter from him it just made me feel sick to my stomach. We were engaged. He finally confessed to one of his many infidelities in an email from his tour and everything came into sharp focus - i didn't have "trust issues" at all, i just got caught up with a lying, cheating sack of shit just because he bamboozled me by promising me kids. Anyway, dumped him over email, took all his stuff to his friend's place up the road before he got back from tour, sent the ring to his mom, cut up our credit card, and eventually cut him out of my life completely.

They're a little too close to one of your friends.

Telling me he’d never ever cheat on me apparently.

Also having a weirdly close intense friendship with my best friend and being extremely protective of her and spending a lot of time alone with her from which I felt excluded. They just had a vibe, the vibe was because they were sleeping together.

They put too much effort into their appearances when they go run errands.

Showering and putting on cologne just to "run errands". This was a guy who usually showered "when he felt like it" (about twice a week on a good week).

Never having money, said his pay checks were messed up but wouldn't show them to me.

Random phone calls to the house where the caller hung up if I answered the phone.

I had a lot of red flags and he adamantly denied doing anything wrong. But when his "platonic" friend came up pregnant, it was time to go.

Sketchy behavior with his phone that was out of character for him (hiding the screen/turning away, swiping away notifications). He became distant and intimacy was suddenly non-existent.

Basically my gut told me something was going on. He was suddenly acting different and wouldn't talk about it when I asked what was up.

They never show their phone.

Mostly just how he never showed his phone at all. Early on I asked him to show me a pic he took, but when he went into his albums he turned it away and when I asked he refused to show me.

He accused me of cheating twice very early on, but never again after that so I felt it was because his ex had cheated. He lied about hanging out with one girl friend instead of "friends" I know the girl was just a friend, but it was still weird and I was mad he lied.

Then also, he didn't want sex much and turned me down a lot. Yet when I got back from a short trip, I saw he had masturbated more in two days than we did in a week.

He mostly just cheated online and also by accepting a happy ending.

They change their habits.

He just changed so many of his habits. He started drinking a lot more and staying out much later than he did at the beginning of our relationship. He lost almost all interest in sex and as many others have experienced, he began to accuse ME of cheating.

He refused to put our relationship on Facebook despite the fact that we were both avid users and he was the one who pushed for relationship status/moving in together really quickly.

He was always very concerned about where I was going, what I was doing, and who I was doing it with.

He told me that poly/open relationships were completely awful and he would never do something like that.

They're "extremely protective" of their phone.

extremely protective of his phone. wouldn't tell me his password. etc. once he literally sprinted up the stairs when he left me in his room with it for a minute.

They talk to you way less than they used to.

he started talking to me waaay less despite being way more active on fb messenger. that really clued me in to the fact that he was talking to someone else. he was opening fb messenger every 2 mins to talk to someone and the “last seen” stamps gave him away lol

They suddenly change their social tendencies.

His behavior suddenly changed very drastically. We were together for years and for that entire time, he was extremely introverted, spent almost all of his time alone, and saw even his best friend maybe once every three or four months. Suddenly he became a social butterfly and was gone all the time. Yeah, I wasn't buying it.

They develop an arrogance when you have fights.

Your gut tells you, even though everything else seems fine.

Honestly gut feeling. He was also much happier and our relationship seemed to be doing well again... but I try to not think that was a sign for my own sanity.

They have condoms even though you don't use them.

He had condoms while I was on the pill.

Also, dyed long hair in his bed that was obviously not mine.

Now, let me be absolutely clear about something. Your partner could be doing all of these things and still be totally faithful to you! What's true for these women doesn't necessarily have to be true for you. But if your gut is telling you something is off, it might be time to talk to your partner about your feelings.

This article was originally published on May 24, 2018