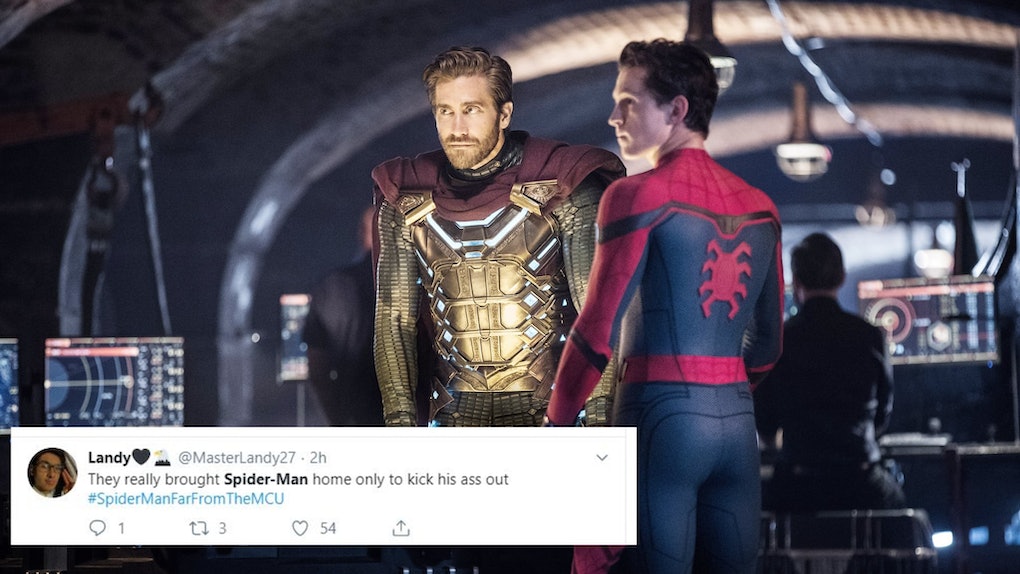 When the news broke that Sony and Disney were, for the moment, parting ways over Spider-Man, the fandom roiled. There are many characters in the Marvel Universe who comic book fans care about, but Spider-Man holds a special place. He's the most popular of all of Marvel's characters, for one thing. After nearly 20 years worth of films, there are a lot of opinions about him. And the idea Spider-Man might no longer be able to interact with other Marvel superheroes on the big screen is saddening. These tweets about Spider-Man leaving the MCU are proof that fans will take the breakup hard.

If there is a silver lining for fans right now, it's that nothing about this has to be permanent. Sony's official statement on Twitter makes it clear the door is open for further collaborations down the line, saying, "We hope this might change in the future." For the moment though, producer Kevin Feige and the Marvel Cinematic Universe won't be directly involved in Sony's live-action Spider-Man films starring Tom Holland as Peter Parker. And until everyone sits back down, the next Avengers crossover film, whenever it might come, won't involve him.

For fans, just the idea of the two parting company, even for the time being, was hard to contemplate. Quickly, a #SaveSpiderMan hashtag sprang up.

Fans have reason to be worried about Holland's Peter Parker without the MCU in his corner. The Marvel Cinematic Universe has given extra weight to this new version of the character. That's not to say Holland isn't golden in the role. But having superheroes outside of his "friendly neighborhood" to interact with has added heft to the character, broadened his horizons, as it were. Without it, Holland would be just the third white dude cast in under 15 years to play the same role doing the same sort of adventures over and over.

Fans' awareness of this drove many a tweet, which called back to the first two Peter Parkers before him, Tobey Maguire and Andrew Garfield.

Fans are also upset because Disney did something sneaky yet smart with the newest version of Spider-Man. They made Holland's character arc all about being a part of the MCU. This version of Parker dreams of being an Avenger. His idol is Tony Stark, aka Iron Man. His entire life and all of his choices are predicated on being more than your friendly neighborhood Spider-Man, but about getting to join forces with something larger than himself.

It was a smart play because it backed Sony into a corner. To walk away would mean having to abandon everything from the first two films, a move that was sure to anger fans. And oh, does the idea of it anger them.

But perhaps all is not lost. After all, the MCU still has Spider-Man's European knock off.

Hopefully, Disney and Sony will eventually work everything out, and Parker can return to the MCU. Until then, fans will have to wait and see.

More like this
Is Netflix Making A 'To All The Boys' Spinoff Series About Kitty? Here's The Tea
By Rachel Varina
This Video Of Disneyland's Marvel's Avengers Campus Is Super
By Cianna Garrison
Here's How To Stream 'Nomadland' So You Can Finally Get The Hype
By Rachel Varina
Stay up to date