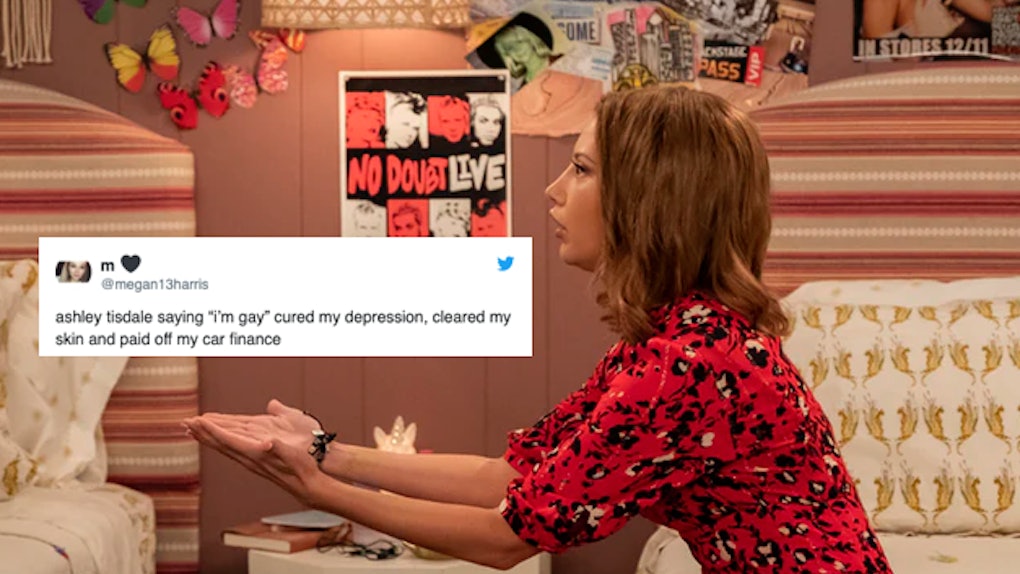 In honor of the coziest time of the year, Netflix dropped a new gem called Merry Happy Whatever. As with many holiday-themed projects, the sitcom follows a quirky, chaotic family during the week of Christmas. But the celebrations aren't the only reason fans are falling in love with the show: Amid all the yuletide festivities, one of the main characters (Kayla, played by former Disney queen Ashley Tisdale) ends things with her husband and tells her family she's gay. The plot point was surprising to some, and beloved by pretty much all, and Twitter is now flooded with tweets about Kayla coming out in Merry Happy Whatever that show how much the moment really meant to fans.

Merry Happy Whatever is filled with funny bits as all four siblings of the Quinn family try to navigate the holidays with their overbearing dad Don (Dennis Quaid). Amidst all the laughter, Kayla, one of the Quinn siblings, realizes that she's gay and tries to figure out how to come out to her family. Kayla's journey is filled with both funny moments and heartfelt ones, making it a storyline that's resonating with lots of fans at home. Many viewers have taken to Twitter to talk about Kayla's emotional journey on the show.

Fans are especially excited about Tisdale's performance in the role. A lot of people grew up watching her as Sharpay in High School Musical movies, so it's especially exciting to see her tackle this new, complex character.

Not only are fans loving Tisdale as Kayla, but they're also appreciating the depiction of the coming-out experience. In fact, a bunch of fans have tweeted that the moment when Kayla comes out to her entire family reminds them of their own journeys.

Merry Happy Whatever is even inspiring fans to follow in Kayla's footsteps by embracing their own identities — so much so, at least one fan said they came out to their own family because of the positive role model Kayla was to them.

Season 1 of Merry Happy Whatever is on Netflix now.