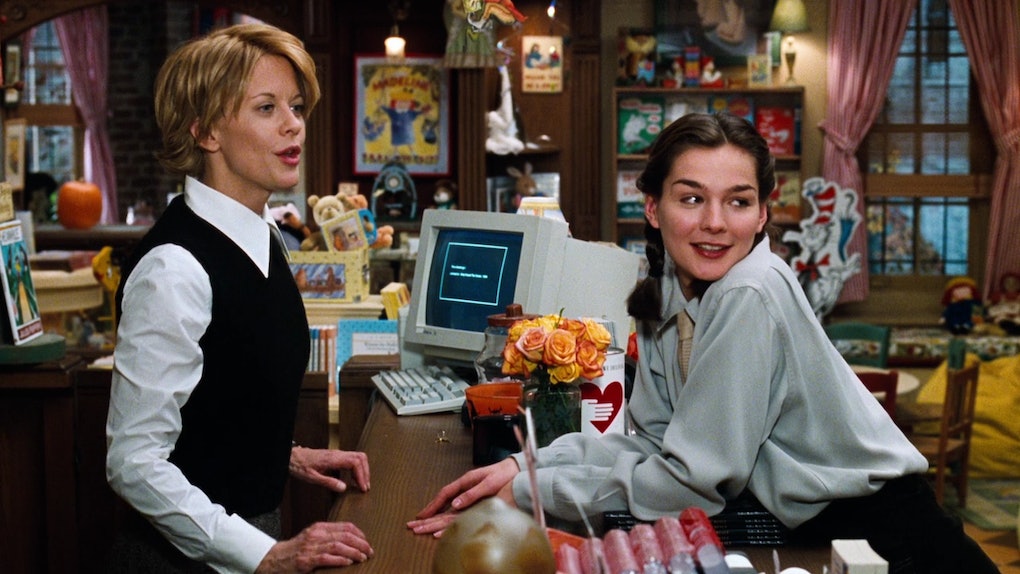 Brace yourselves for a nip in the air, chunky sweaters, and everyone you meet having a strong opinion about pumpkin spice lattes. Autumn is almost here, but right now, the weather may seem stuck in that odd phase of not really knowing what season it is. In case the outdoors isn't reflecting how you feel, what better way to prepare for the new season than by watching these fall movies that'll make you crave apple pie and chilly walks?

From focusing on the start of a new school year to featuring autumn weather at its best, fall movies definitely aren't exclusive to Halloween flicks that strive to scare. While a few Halloween favorites made our list, these other films are dedicated to stirring up a mood that calls for snuggling under a blanket, sipping some tea, and relaxing before the holiday craziness of late autumn and early winter sets in. Sure, you may still be using the AC in your apartment, but it's the thought that counts.

Whether you interpret autumn as Nora Ephron's odes to New York or a time for your monster-loving heart to thrive, the movies praising the season can't be missed at this time of year. Get comfortable and pull on your thickest sweater, because you have movies to watch!

Tom Hanks likening New York in the fall to replenishing your school supplies is Ephron-ian poetry. While You've Got Mail also follows Hanks and Meg Ryan through winter and spring, it opens on a decidedly autumnal note with characters wearing comfy sweaters and walking under orange-tinted trees in Manhattan. Watching Ryan's Kathleen and Hanks' Joe fall in love over anonymous emails while feuding as business rivals IRL never gets old, and Kathleen's very '90s wardrobe of jumper dresses and knit sweaters could still totally work for your fall outfits this year.

Any of the first three (and significantly lighter) Potter films can probably satisfy your autumnal cravings, but Sorcerer's Stone's special focus on Halloween and introducing young Harry to a new world of cloaks and magic makes it a perfect watch during these next few months. Bonus points if you can reenact Professor Quirrell's "troll in the dungeon" line in seamless alignment with the movie.

Save this holiday movie for later in the season when you've run out of Halloween candy and Thanksgiving dinner is on the horizon. Steve Martin plays an advertising executive trying to travel from New York to his Chicago home in time for Thanksgiving, but the inevitable, nationwide travel craze foils his plans. He reluctantly teams with salesman Del Griffith (John Candy) to reach Chicago together, but the two clash and essentially become the Odd Couple on the road. This is sentimental comedy at its finest, and if you can, watch it with your family over the long holiday weekend.

The ultimate back-to-school movie, Dead Poets Society also travels through seasons. However, if a movie is set at a New England prep school, you can bet you'll see plenty of autumn leaves and boys in sweaters. Those who can't resist boarding school stories will love Robin Williams' English teacher trying to reshape his students' traditional ideas of what a successful, happy life looks like. The shots of the school's surrounding natural scenery definitely don't hurt either.

Fall means football is taking over the broadcast schedule, and if you need a sports movie to mentally prepare for Sunday night games, Remember the Titans is for you. Based on the true story of an African-American football coach's attempts to integrate a Virginia high school team in the 1970s, Remember the Titans is a film choice that will convince the hardcore football fan in your life to give up ESPN for a few hours. Look out for a young Ryan Gosling as one of the football players!

If you don't watch Halloweentown this year, did you even experience fall? As Halloween approaches, you can definitely throw yourself a movie marathon of the whole Halloweentown franchise, but if you're pressed for time, the first and best movie in the series is the way to go. After watching the Cromwell family of witches and warlocks save Halloweentown, check out star Kimberly J. Brown's Instagram for any new posts celebrating her history with the films.

Otherwise known as the female version of Dead Poets Society, Mona Lisa Smile follows Julia Roberts as an art history professor at a prestigious women's college in, yes, 1950s New England. Its crisp sweater sets, Victorian homes, and sweeping scenery will make you want to go back to college, but only if Roberts was your feminist mentor, of course.

September is wont to inspire the feeling that you should be back in school, idealistically debating about literature and your latest existential thoughts. If you can't shake off September not-so scaries, Liberal Arts will hopefully soothe your nostalgia. Basically playing Ted Mosby 2.0, Josh Radnor is a dissatisfied 35-year-old who falls for a student when he visits his old college campus. He craves the leisurely days of collegiate academia, while Elizabeth Olsen's 19-year-old drama student longs to grow up and sees a path to adulthood in her relationship with Radnor's Jesse. The film manages to avoid the characters' bond growing too icky, but watching them roam around Kenyon College will make you want to sharpen pencils ASAP.

Nora Ephron loves her walks through New York in the fall. The You've Got Mail director and co-writer also penned When Harry Met Sally..., which takes place over the course of several years and seasons. Like with You've Got Mail, the season that this is best associated with is debatable, but one of its most memorable images is longtime friends Harry and Sally walking through Central Park under a canopy of autumn leaves. Let me know when Sally's hat in this scene is officially back in style.

Disney movies aren't often associated with certain seasons (Frozen and winter aside, of course), but one glance at the multicolored leaves in Pocahontas's "Colors of the Wind" stirs up fantasies of a magical autumn. It's a little overlooked compared to Disney's other '90s masterpieces, but Pocahontas is visually stunning and fits your autumn aesthetic more than you may think.

This cult favorite introduces four teen girls who explore witchcraft together with extremely dark consequences. While their powers initially reward them with their greatest desires, things take a twisted turn, making The Craft best for a creepy midnight showing close to Halloween. Plus, if you and your squad are on the lookout for a more obscure group costume, dressing as the cast of The Craft might be your solution.

Anything Tim Burton has directed screams of fall, but seeing as Sleepy Hollow is based on Washington Irving's equally eerie short story, it meshes well with the Halloween season. Featuring Johnny Depp as constable Ichabod Crane investigating murders committed by the Headless Horseman, Sleepy Hollow also includes an all-star cast that isn't a complete carbon copy of the group of actors Burton always seem to employ nowadays.

I mean, the title says it all. Richard Gere is a flirtatious New York bachelor never wanting to settle down, but when he meets Winona Ryder's 22-year-old woman, his perspective changes. The story might have soured a little in the years since the film's release, but you can't deny the visual appeal of Central Park overwhelmingly full of fall foliage.

Another school story, Rushmore includes director Wes Anderson's trademark of otherworldly characters and clean, unique visuals. It follows eccentric student Max Fischer at the private Rushmore Academy as he unexpectedly befriends the billionaire dad of two classmates and falls for widowed teacher Rosemary Cross. If you want a back-to-school flick with its own weird touch on reality, Rushmore should soar to the top of your must-watch list.

Before they were acclaimed Oscar-winning actresses, Sandra Bullock and Nicole Kidman starred as sisters whose magical powers have cursed their romantic partners to meet untimely deaths. Now grown women determined to break the curse, Practical Magic follows the sisters' attempts to win back their freedom and fight against the supernatural powers that have altered their lives. Even if it's not the best movie ever, Bullock and Kidman make anything better, and everyone's autumn needs a good dose of witchcraft to be considered a success.

Time to bake some pumpkin-flavored treats and kickstart the best time of year! What movie will you watch to celebrate the start of autumn?

More like this
The 'Space Jam: A New Legacy' Trailer Will Bring Back All Your Childhood Memories
By Cianna Garrison
10 Rainy Day Movies To Watch On Netflix That Are Perfect To Pass The Time
By Kristen Perrone and Lexi Williams
This Video Of Disneyland's Marvel's Avengers Campus Is Super
By Cianna Garrison
Stay up to date