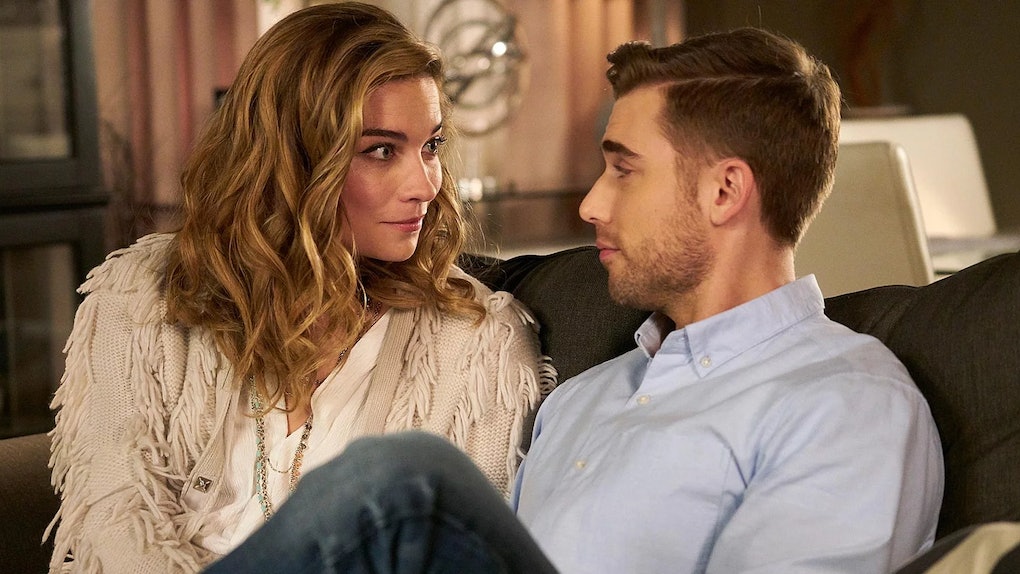 Spoiler alert! Raise your hand if you think Alexis Rose and Ted Mullins should have been endgame 🙋‍♀️. While I'm happy Alexis proved she didn't need to be in a relationship to be happy (and I loved this journey for her), there are definitely a few Alexis and Ted moments from Schitt's Creek I'll never get over. And fine! I'll admit these two have nothing on David and Patrick. From an ill-fated proposal, to a research trip across the world, to Alexis' messy entanglement with Mutt Schitt, Alexis and Ted faced endless challenges during their relationship. But c'mon. How can you not fall even a little bit in love with these two?

From the first time Alexis and Ted crossed paths at Café Tropical in Season 1, it was clear their relationship was going to be something special. The pampered princess and the pun-loving veterinarian may not have made the most compatible match, but through each other, both characters learned a lot about themselves. Ted helped Alexis tap into her ambition and develop empathy, while Alexis pushed Ted to pursue his dreams and stand up for himself. Sadly, they didn't end up together, but these sweet moments shared between Alexis and Ted will live on forever.

The first time Alexis and Ted met was at Café Tropical, when Ted told Alexis it probably wasn't the best idea to order Twyla's "Meadow Harvest" smoothie. His not-so-romantic first words to Alexis: "Um, just feel like I have to warn you, what you just ordered is gonna run through you like Niagara Falls." Not long after, he asked her on a date, and she said yes (even though it was only to make Mutt jealous).

2. When Ted Showed Up Back In Town On A Motorcycle

Though their relationship got off to a rocky start (especially after Alexis rejected his unexpected proposal), things picked up again after Ted returned to Schitt's Creek on a motorcycle... which he bought after trading in Alexis' engagement ring. (#Awk.) But he proved he was still corny Ted when he told Alexis, "My day's been stacked, doing rounds to some farms, checking on the animals, and now some house calls. But I gotta say, it's a lot more fun now that I've got this puppy. Pun intended."

3. When They Hugged... And Then Accidentally Kissed

After Alexis started working at Ted's vet clinic, the two shared a moment of sexual tension when Alexis found out she passed her exams — and then accidentally kissed Ted out of excitement.

To congratulate her for passing her exams, Ted gave Alexis a pencil from Rose Apothecary... which she mistook for a stick. "I will definitely try to use this," she assured him.

5. When Ted Came To Alexis' Graduation

Even though Alexis quit her job at the clinic, Ted still surprised her by coming to her high school graduation ceremony. When she asked why he was there, he said, "It's your graduation. What do you think I'm doing here? I was just taking pictures."

6. When Alexis Confessed Her Love To Ted

Throughout Season 4, Alexis came to the realization she was still in love with Ted, even though he'd moved on with someone new. But eventually, she couldn't stop herself from confessing how she felt. At the vet clinic, she told him, "I love you. I'm in love with you. And I know I really don't have any right to say that to you. And also, I know you're in a relationship, and I'm happy for you, I really am. I just feel like if I didn't tell you how I felt, I would literally go insane. You're the sweetest man I've ever known. And that's it."

7. When Ted Confessed His Love Back

Not long after telling Ted how she felt, Ted confessed his own love back at Alexis' Singles Week speed dating event. After sitting across from her, Ted said, "Apparently, I only have two minutes, so I'm gonna make this quick. Hi. I'm Ted. I'm newly single. And I'd be kidding myself if I told you that I haven't wanted to do this every single day for the last two years."

8. When Ted Gave Alexis A Butt-Tap

Once they were back together, Alexis and Ted went on a cute double date with David and Patrick at a ropes course, where Ted gave Alexis a cute pat on the butt for good luck.

9. When Alexis Convinced Ted To Loosen Up

After Alexis convinced him to attend Patrick's housewarming, a very stressed-out Ted surprised her by showing up totally drunk and ready to party.

10. When Ted Did An Alexis Impression

Once he had a little too much fun at Patrick's party, Ted ended the night by doing a spot-on impression of Alexis in bed.

11. When They Hooked Up At Rose Apothecary

Though Alexis was tasked with managing Rose Apothecary while David was away at a flea market, she got a bit distracted when Ted unexpectedly showed up at the store. Unfortunately, their sexy hookup ended with a broken bathroom sink.

When Ted was invited to participate in a six-month research program on the Galapagos Islands (which he applied to before he and Alexis got back together), Alexis uncharacteristically urged him to attend. "You love old tortoises!" she told him. "It sounds like a dream!"

13. When They Booped Each Other Over Skype

The two tried a long-distance relationship after Ted left for the Galapagos, and though their first attempt at Skype sex was a major fail, Ted managed to pull off the perfect virtual anniversary dinner. It even included an adorable "boop" through the computer screen.

14. When Ted Made A Surprise Visit Home

Alexis' reaction when Ted arrived home for a surprise visit from the Galapagos was almost too cute to bear — though unfortunately, he was only able to get a weekend break, which gave them one day to spend together before he had to head back.

15. When They Eventually Broke Up

These two may have ultimately decided to go their own ways, but at least fans can always cherish Ted and Alexis' best moments together.

Thanks for making me feel all the feels, you two.