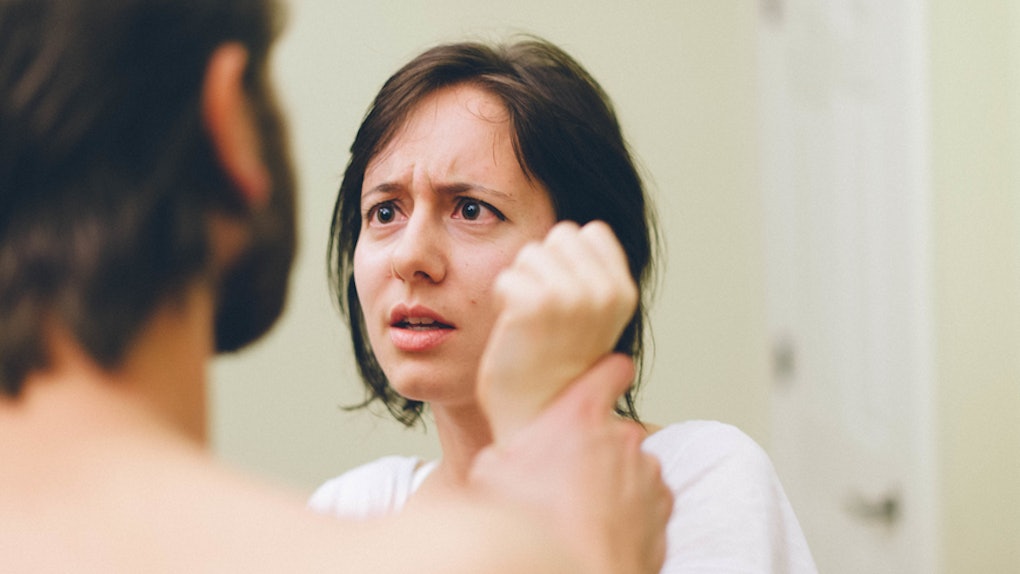 14 Women Reveal Their Red Flags As A Partner, Because Yes, We All Have Them

Let's face it, people: We all have our own red flags. Especially when it comes to relationships because, well, being in love makes even the most calm, cool, and collected members of society lose their marbles a bit. It's inevitable that, even in the best relationship, you and your partner will both still have a few red flags up your sleeves. While it's easy to see red flags in a partner, calling out your own red flags can prove to be more challenging. Read along as these brave ladies in a recent Reddit thread stepped forward to share their own red flags.

Yep. I had a lot of jealousy and envy. There's a lot of messages in our culture about how being jealous/insecure is one of the worst things you can be, and it was really hard to confront and deal with.

Working on my depression and self esteem issues made my jealousy and envy pretty much go away.

Not sure if this is a red flag or more of a dark pink one, but...

I find myself passively trying to manipulate people's behavior by doing things for them that I would like them to do for me, and then expecting them to reciprocate, out of kindness, or guilt, or a sudden dawning realization that this is how they should be treating ME, by following MY example.

Inevitably, I get butthurt because they didn't do what I very clearly demonstrated they should be doing, and I am the put-upon suffering martyr by throwing myself out there and doing all of these awesome things for them and being such a fantastic partner in the relationship. Then, because they didn't "perform" at the same level or intensity in our relationship, I am justified to dump them.... or continue to be a martyr and complain about it... whichever suits my needs at the moment.

She has low self-esteem.

My major red flag is that I mask my low self esteem with nonchalance. I have a hard time accepting praise. I react with complete disinterest when I feel hurt and slighted. I take things personally but say things don’t matter or I don’t care. It’s bad but I’m working on it.

She inherited her ex's abusive behavior.

I picked up a lot of small but unhealthy behaviors from my ex boyfriend. He was a narcissistic emotional abuser, and I started hearing his words coming out of my mouth. Whenever I didn't get my way, the next words out of my mouth were "You hate me, you don't love me at all do you?". And I didn't mean it, in my head it was a funny joke. But it was the same emotional manipulation my ex used and had the same effect on my SO.

My ex used to wear me down with gaslighting and arguments until I would finally say, "Ok, you're right. I'm sorry". He'd respond with "I know you're sorry. Now apologize." This was devastating to hear every time. If I ever hear myself say this I'm finding the nearest cliff and jumping.

She sees the worst in people.

Yes, all the time. I am incredibly overly sensitive and tend to believe the worst outcome possible of situations/people. My boyfriend often has to remind me that just because my friend didn't respond to my text doesn't mean she hates me, and just because we had an argument, doesn't mean I should always react with tears.

Now that I wrote that out, I think my problem is self-esteem.

She has a hard time with confrontation.

I struggle with conflict and confrontation, and I'm not always assertive enough when I need to be. Sometimes I bottle things up for quite a while. I'm learning and growing in that area, though.

I lie fairly often in a relationship; small lies to get my way. Often I do it unconsciously, and upon reflection, later on, I finally see what I was doing. I also tend to detach during sex even in serious intimate relationships, and I can be a bit callous with my partner's money. I think I found out by noticing a pattern in my relationships and also if I got called out by past partners.

She has anger management issues.

Yep. My anger. It wasn't anything surprising when you look at my father, who was yelling pretty much every day over the smallest things. I was dating a guy in college when I lost tickets to a show we were going to that night. I was really angry at myself. He stood in my doorway to my bedroom as I searched and I just took my anger out on him, I don't remember what I said but I was between yelling and crying. I then ended up throwing something at him. He was so shocked and started to leave. I apologized when it dawned on me what I did. It was like I just saw red. This happened on a number of occasions.

I had a lot of anger issues for several years in college. I definitely know now that it was undiagnosed depression. I figured that out because after several years of being perfectly fine, minus anxiety, I was diagnosed with PPD quickly after my son was born. My biggest symptom was anger and thoughts of abandonment. Depression shows itself if different forms, a red flag I didn't see.

I tend to be a bit selfish and can sometimes steer a conversation to be about me rather than the other person or group. I know that this stems from being an only child and trying to get attention from the adults when I was younger, it also stems from always trying to be apart of something too. I am getting much better at this now though because when these things start I try to stop myself and switch the conversation back to the person or group. I also check in with myself and ask myself where I am at, am I okay or am I needing something else that this conversation can't give me (like food for example). I just try to be aware of myself and make sure to not do to others what I wouldn't want done to me, like being unintentionally excluded from a conversation.

She has a hard time getting intimate.

It took me a long time to figure it out, but I struggle with actual intimacy. I didn't realize it because I would be the most attracted to men who were not very available, so the level of closeness was comfortable because it wasn't truly very close. When I started picking more available men, I felt consistently repelled by them when they'd show interest and affection. After this happened a few times, I realized the problem was with me. I've sorted through it with therapy and lots of honest self-reflection and writing. When I have that feeling of wanting to run from actual care and love, I recognize now that it's a fear response and I don't allow it to make decisions for me.

I get a bit psycho when a guy cancells on a date (even if it is for a good reason), I get bitter and it shows...I found out because after half an hour I'm totally okay and re-read my texts and realise I've overreacted. I'm really impulsive and I've been really trying to work this out, now I try waiting a few minutes before texting back.

I am (was) extremely passive aggressive. I would never share anything that made me angry, mad, sad, jealous, etc. I was that woman when asked if something's wrong, answering "nope, fine," and keep pouting or just being sarcastic and distant.

I noticed that after seeing other relationships around me. Other couples had arguments, fights and made peace after those. For me it was all good until some small issue hits my breaking point and I just leave the guy. No explanation, no real answer. Only an "I can't take it, I'm unhappy and I'm leaving."

Now I'm trying to be open and talk about what really is my problem. My boyfriend knows it's difficult for me, so if I say "I will talk to you about this but give some time" he knows I'm trying to do better and gives me the time I need. I still slip sometimes, but you know what? We had arguments and we're still together. That's my improvement.

She obsesses over relationships.

Most recently I've been relationship obsessed. Scared off a dude I'd been seeing a few months when things were otherwise going alright-ish. During it though I had issues relaxing and opening up with him because I was just putting too much pressure on myself to make things work. I think I'm just unsettled with where I am in life right now and want to "progress" in some way. So I obsessed about relationship crap because I think I saw it as a way of moving my life forward since other parts of my life aren't making much progress. Now I'm trying to just work on myself and ignore the urge to just go out and try to find love.

She puts people she's seeing through tests they don't know about.

I test men at the beginning stages of dating. If I have true feelings for them, I will go bat sh*t crazy and see if they stick around. Most of it is subconscious, but finally recognize the pattern after this last guy I was seeing. I was so upset that he didn't want to talk to me anymore. Who in their right mind would after receiving walls of text telling them I really like you but please block me. This bullsh*t is not happening anymore! I do deserve these hot guys with good heads on their shoulders and I won't test them anymore!!

At the end of the day, we all have red flags. The key here is to recognize your flags like these brave ladies did and do your best to improve yourself.

More like this
Here's Why Someone Cheats On Their Partner, Based On Their Zodiac Sign
By Danielle Sinay
19 Cute “Good Morning” Texts To Send Your Partner Every Day & Put A Smile On Their Face
By Christy Piña
20 Deep Questions To Ask Your Crush During A Game Of 20 Questions
By Cosmo Luce
Stay up to date