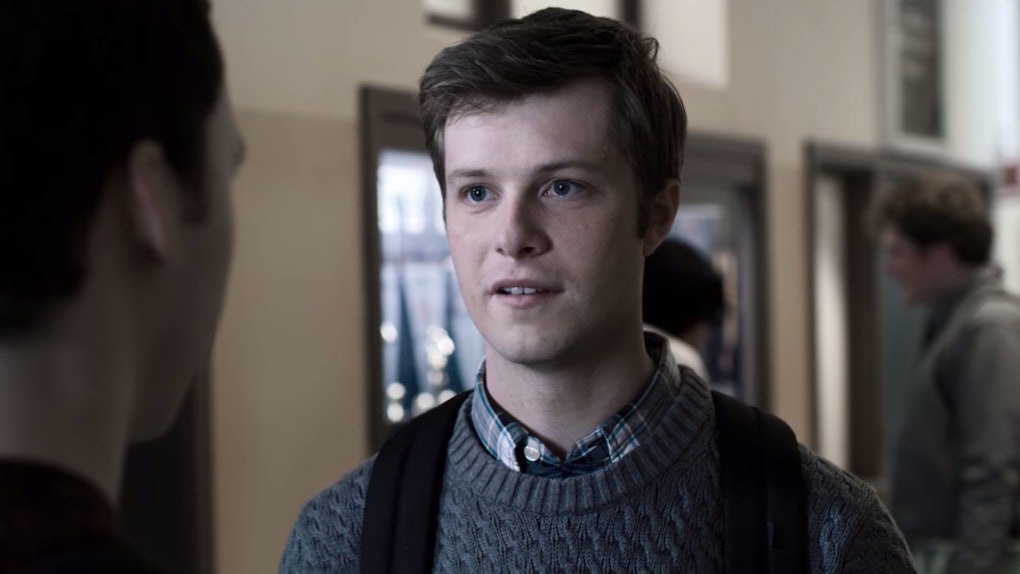 It's not always easy to join a popular series that's already a few seasons in, but 13 Reasons Why newcomer Tyler Barnhardt has seemed to pretty much take it in stride. His character Charlie St. George quickly became one of the Netflix hit's most likable characters when he joined the cast in Season 3, and while fans don't always take kindly to change in their beloved shows, their reception of Charlie (and Barnhardt) has been super positive. This is definitely a good thing, since Barnhardt says viewers will be seeing even more of him when Season 4 rolls around.

During our interview for Elite Daily, Barnhardt has an infectiously positive attitude from the get-go, greeting me with an enthusiastic "Whatsssuppp!" before launching into the story of how he landed the part of Charlie. Even when he tells me about all the times he auditioned for the show before getting cast (it was seven total, he thinks), he has a great outlook. "You know, obviously they didn’t hate me, because they kept asking for more roles and auditions, so it was just one of those things that I knew, if I kept going at it, something would land eventually at some point," he says.

His optimism and persistence finally paid off when he landed the role of wide-eyed, impressionable sophomore in Season 3. Younger than the rest of the show's characters, who are primarily all seniors, Charlie was taken under the wings of the other kids, which sort of mirrored Barnhardt's own introduction into the show's cast.

"Working as a newcomer, I definitely wanted to make a great impression and, like, truly see if they are as close as everyone thinks they are, you know? And they are," he says. "One of the first days on set, we were all working together ... and they were all incredibly warm and welcoming, and just like, ‘Oh here’s our numbers. Let us know if you need anything. Let’s hang out later.’"

Warning: Spoilers for Season 3 of 13 Reasons Why follow. Unlike Barnhardt's welcoming experience on the 13 Reasons Why set, though, Charlie got sucked into a whole lot of drama when he fell into the crowd of Liberty High football players. "I think it’s funny because throughout the season of shooting, I didn’t really know where Charlie was gonna go," Barnhardt says about his character. "Is he gonna be another one of Monty’s boys, kind of like Scott Reed was in Season 2, or is he gonna fall more in line and take the moral high ground and be kind of a leader that Zack wants all the jocks to be?" In the end, it Charlie turned out to be a pretty good guy, and in a show filled with characters whose decisions range from questionable to downright deplorable, Charlie has quickly become a fan-favorite.

"He’s so caring an empathetic that all I’ve gotten in my DMs — I read all of them — is so fun! It’s all positive," Barnhardt says. Luckily for fans, there's more of Charlie where that came from. Season 4 of 13 Reasons Why is already in production, and Barnhardt promises big things are coming for his character.

"In Season 3, he was very much a new character and he popped up once in a while," he explains. "In Season 4, myself included, we’re learning a lot more about him. Like, I remember Brian [Yorkey, the show's creator] just last week told me something about my character and it’s like, ‘OK wow, that makes me almost want to cry.'"

Barnhardt also potentially drops another big hint about what's to come when he mentions he and Ross Butler (who plays Zach) are sharing a house with Timothy Granaderos (Monty) and Justin Prentice (Bryce) while filming the next and final season. While this could mean the four guys are just friends who wanted to hang out and live together, could it also mean fans will see the presumed-dead Monty and definitely-dead Bryce on their screens again?

"I mean, we know how Season 3 ends, right?" he explains. "The show definitely has, in the past, brought characters back, like Hannah in Season 2, whether it’s in flashbacks or Clay’s imagination, so I think it’s a possibility of that happening in Season 4 with those two guys ... And I don’t even know if that’s gonna happen, because we just started shooting, so I’ve only read the first couple scripts."

Viewers will have to wait until 13 Reasons Why returns to find out in what capacity — if any — Monty or Bryce might reappear, as well as to see how Charlie's storyline progresses. But in the meantime, fans can catch Barnhardt in the upcoming Amazon Video series Tales from the Loop, which is expected to come out in early 2020.

More like this
Lana Condor's Career Goals Are All About Representation — EXCLUSIVE
By Rachel Varina
'Shadow And Bone' Star Jessie Mei Li Can't Stop Watching These Niche YouTube Videos
By Abby Monteil
Are Chloe & Mitchell Dating After 'The Circle'? Chloe Has An Update — EXCLUSIVE
By Dylan Kickham
Stay up to date