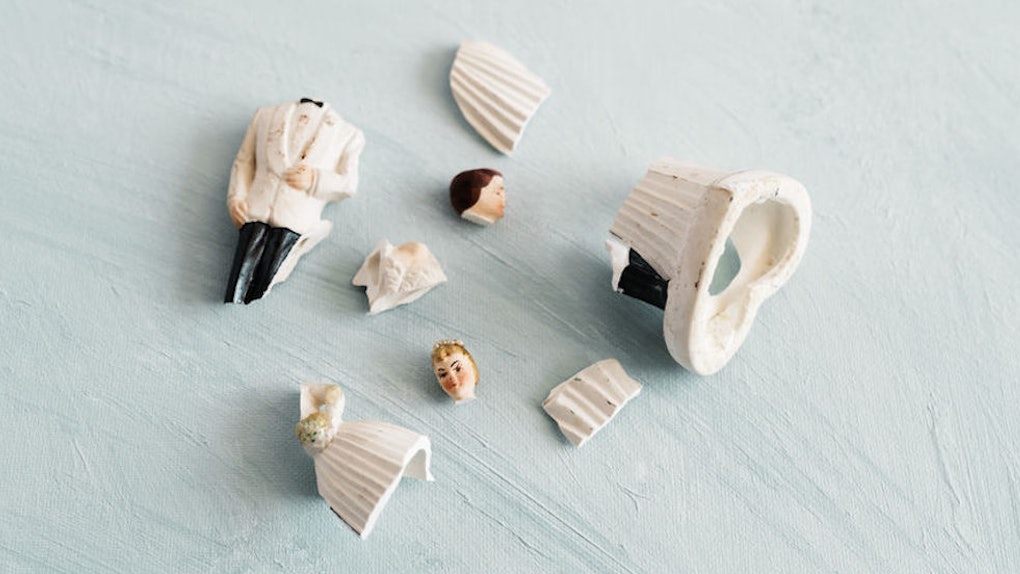 11 People Reveal What The Final Straw Before Their Divorce Was, & Wow, These Are Tough

No one goes into marriage planning on getting divorced. Even if you try to be patient and swallow a lot of hurt in your relationship in order to make it work, eventually, there can be a final straw, and you won't be able to take it anymore. That's where divorce may be a good idea. According to these stories from real women, deciding to get divorced isn't always easy, but it might be what's best. In fact, the final straw before divorce proves that sometimes, you have to do what you have to do.

Obviously, if you've got divorce on the brain, then it means things aren't exactly looking up in your marriage. But, these stories from people who've lived it show that sometimes, that final straw isn't a huge blowout. Sometimes it's something that, on it's own, wouldn't be too big of a deal, but because it was the end of the line for their relationship, they couldn't take it anymore. Divorce is intense, but perhaps the hardest part of it is just deciding whether or not to actually go through with it.

So, no matter where you are in your own relationship — whether you're single, dating, married, separated, divorced, or anywhere in between — just read on. Because seriously, these stories range from heartbreaking, to hilarious, and just about everything else.

I think Pokemon Go was the final straw. We weren't married but together for 8 years with a kid. He had trouble keeping a job and hadn't had a full time job in 9 months. He worked part time and lost his job and had some bull shit story. I think he was showing up late and tired from staying up all night playing Pokemon Go downtown all night.

Sometimes, It's A Matter Of Realizing That Your Kids Are Being Impacted

When I realised that both my sons spoke to me in the same unpleasant, dismissive tone as my husband did. When my 10 yr old asked me why I told them everyday that daddy was cross and to try to keep out of his way. When I saw how much better he treated one child than the other.

I hadn’t realised. All those things had become my normal. Somehow not having access to our money had become unremarkable. Being undermined and belittled in front of others was to be tolerated. I had no idea how much I worked to keep the peace and placate. I felt so guilty when it dawned me how much they were absorbing his behaviours and seeing them as normal.

I woke up and saw my life with my old, single independent eyes and was both aghast and ashamed. I never, ever would have believed my life would become the mess it had. The thing is, mostly in other people didn’t see it. He never socialised with people I knew and his friends think he is great. Even my mum thinks I exaggerate and should put up and shut up. I feel so isolated but I refuse to put up with this shit any longer. My kids deserve an emotionally healthy example of relationships and love.

When one of my husband’s MANY girlfriend’s actually came up to me, apologized and said, “He told me that you knew about me, and that you had an open marriage”. I was already planning on leaving him, because of the infidelities. She just made me move all that much faster.

Sometimes There's Just No Empathy... And Another Woman

Husband was out of town on a business trip. I had a surgery scheduled for the same time. Had the surgery and there were complications. It was supposed to be a day surgery and I should have been home that evening. Ended up in the ICU for two days and the hospital for four more. My friend called my now ex husband and told him that I almost died and was in ICU and he needed to come home. His reply, 'Well, she didn't die so I'll be home when my business trip is over.' After he got home and I got home from the hospital, he was nice enough to leave the hotel invoice on our dresser. A room with two occupants.

You Should Never Feel Alone

There were two things that stuck in my mind I just couldn't get past. But it was a lot of different things. I guess these two were the nails in the coffin.

Birthday dinner for my father in law. 5 minutes before we are leaving for dinner me ex tells me, "oh, dinner is just for our immediate family". I thought I was his family. It was very heartbreaking.

I spent a month caring for my dying Grandmother. One of the most treasured people in my life. I was exhausted and devastated by the time she passed. I don't even remember the conversation just his response of, "I really need your support right now, your Grandma's death really messed me up".

I realized I was alone in my marriage and that it wasn't ever going to change. I had to walk away for my own health and sanity.

He tried to kill my 8 month old kitten by throwing it through a wall in our apartment. His reason: "The little asshole wouldn't stop meowing."

Convincing our children to drink their own urine. He decided to practice urine therapy and I was disgusted and started to prepare for divorce but when he got the kids involved I immediately knew it was over.

He got blind drunk at his birthday party and was trying to starts fights, etc. So I got him home. Had the presence of mind to hide the car keys in the drier. He wanted to go back out, so tore the whole house apart looking for them. Threatened me with a kitchen knife when I wouldn't give up their location. So yeah, marriage. Good times. Lol.

He married someone else while he was married to me. Final straw.

Marriage Is Not A Game

We were playing a D&D type board game and his character walked into a trap I'd set and took a massive amount of damage. He tried to institute his own version of "take backsies", and when I refused because we were adults and he was cheating, he knocked the game board over and yelled, "That's it! THAT'S the straw that broke the camel's back! I want a DIVORCE!"

Sadly, we worked things out and continued on through more miserable years until I eventually called it quits due to his online dating and his controlling behavior.

That game still has a special place in my heart, though.

I had just had my car repaired and repainted following his wrecking of the front end in a careless accident. He took it for a middle-of-the-night joyride with his pot supplier buddy. While I slept unawares, he managed to accomplish the following:

1) Double parked in front of known drug dealers house 2) Caught the attention of a cop in a CLEARLY MARKED SUV 3) Drove 2 miles with cop following WITH LIGHTS AND SIRON ON 4) Finally noticed cop and ENGAGED IN HIGH SPEED CHASE 5) Totaled my car by crashing through a corn field and into a F*CKING TRACTOR 6) RAN FROM THE SCENE leaving uninjured drug buddy behind 7) Concocted idiotic scheme whereby he would pretend to have been car-jacked 8) Stabbed self in the chest WITH A GODDAMNED POCKET KNIFE to lend credence to said scheme 9) Suffered collapsed lung requiring hospitalization, followed by arrest 10) Did NOT get visited in either hospital or jail by soon-to-be ex wife. I didn't give a d*mn what happened to him, but I cried like a baby over the loss of my car.

No matter how intense, dramatic, or awkward your divorce is, it's never easy, and these people prove that. Hopefully, you'll never have to face issues this severe yourself. But if you do, then perhaps these stories can help remind you that the grass is greener on the other side, and that you can get through anything.