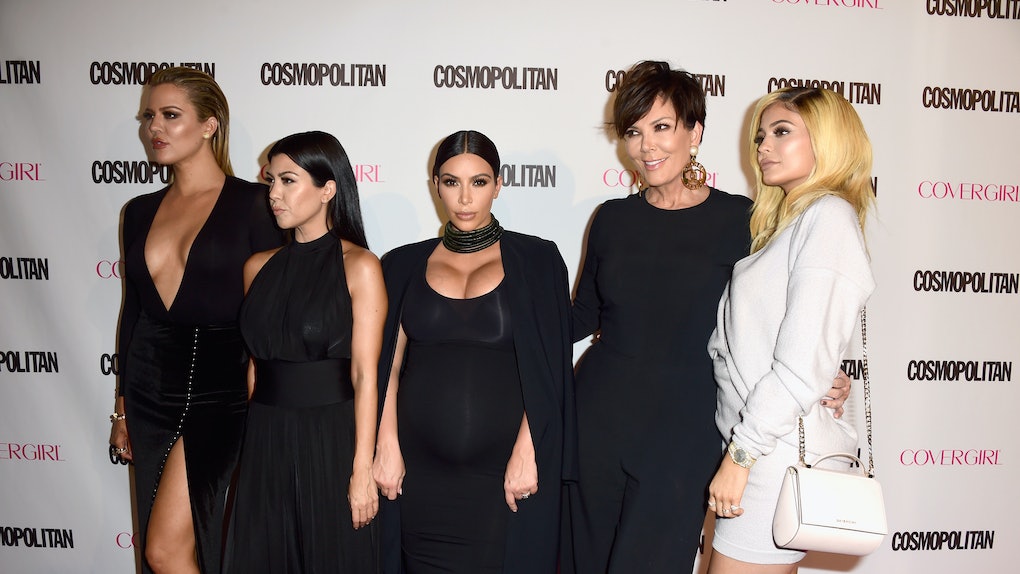 11 Kardashian Quotes About Love That Are So Effing Honest

When I think of rich family epics, I think of the first book in Elena Ferrante's Neapolitan Novel series, My Brilliant Friend. Ferrante covers female friendship and young love with so much clarity it hurts. Oh, yes, I'm pretentious. With news that HBO is turning Ferrante's books into a television series, I'm reminded of the original multi-part family epic of the small screen: Keeping Up With The Kardashians. After some digging, I uncovered some Kardashian quotes about love that almost rival Ferrante's work. (Almost.)

I focused on the members of the clan whose first initial starts with "K" — Kim, Kourtney, Khloe, Kendall, Kylie, and Kris — because my name, too, starts with a "K." Actually, I just couldn't find a quote from Rob Kardashian that felt... happy. (Poor Rob, I hope you're OK!) And Kanye West is the most Ferrante-adjacent of them all, and his name fits the K theme, so I included his wisdom, too.

Instead of Naples, Italy, think about Naples in Long Beach, California... and then hop over 30 miles to Calabasas to take in the Kardashian's signature candor on the subject of love.

“I think I’ll always be a hopeless romantic. I believe in love and the dream of having a perfect relationship, but my idea of it has changed. I think I need to not live in a fairy tale like that. I think I maybe need to just snap out of it and be a little more realistic," Kim shared with Glamour. It seems like she's "keeping up with" the reality of love.

“It’s very comforting to have someone that knows everything about you, that respects you, understands, has gone through the similar things," Kim shared with Oprah Winfrey. Honestly, I can't think of one celebrity male more similar to Kim than Kanye. I can't think of a more seamless portmanteau nickname either.

"I don't want to be an idiot, but I'm crazy about him," said Kourtney about her ex Scott Disick on an episode of KUWTK. Kourtney always tells it like it is.

"I don't think normal people hate the people that they're with this much." — Kourtney, on another episode of KUWTK, also about Scott. This sounds benign, but no one should hate the person they date. Kourt, you're korrect.

Khloe Has Advice On Catching Feels

“I’ve chosen to keep things closer to my heart until I figure it out. I love hard, I love who I love, and I don’t make any qualms about it. And I can’t wait for that to happen.” — Khloe, in an interview with Yahoo Style.

“I don’t think it’s fair for me to lead somebody on, or for me to act like I’m in this perfect headspace if I’m not. With love, you don’t mislead or play around, so if you’re not perfectly clear, just be honest about it." This quote from a Complex interview with Khloe confirms she's not a f*ckgirl, I guess?

Kylie Keeps It In Context

“The first year we started hanging out, everyone around him told him not to be with me. I still get comments like, ‘Don’t be with him.’ But we’re not doing it for the public—we love each other. We need to be together at all times. We never get mad at each other, we just figure things out." —Kylie to Complex. This was about Tyga so, uh, oops. But still, Kylie gets it.

"I'm not engaged. There's nothing long-term or serious like that in my life. If I'm not fully, fully in it with someone, why would I make it public to everyone else? If I don't even know what it is, why would I let the world know?" Kendall said in Harper's Bazaar.

"I think it's something sacred," the notoriously private Jenner. "It's something between two people, and nobody else's opinion needs to be involved in it." You do you, woman!

Kris Manages Her Love Life Like Her Kids' Careers

"And what are you going to do? You have to just be there. And you have to accept that everyone is going to have something." —Kris in Harper's Bazaar on finding out Caitlyn is transgender with the public. This a lesson is empathy and understanding, which is pretty cool coming from the matriarch of a reality TV family.

Kanye Loves How Hard Love Is

"On a bathroom wall I wrote / 'I'd rather argue with you than to be with someone else" — from Kanye's song "Blame Game." Kanye lyrics are surprisingly full of consternation about love and women, but this one in particular is a gem, because we've all been there. (Well, besides the bathroom part.)