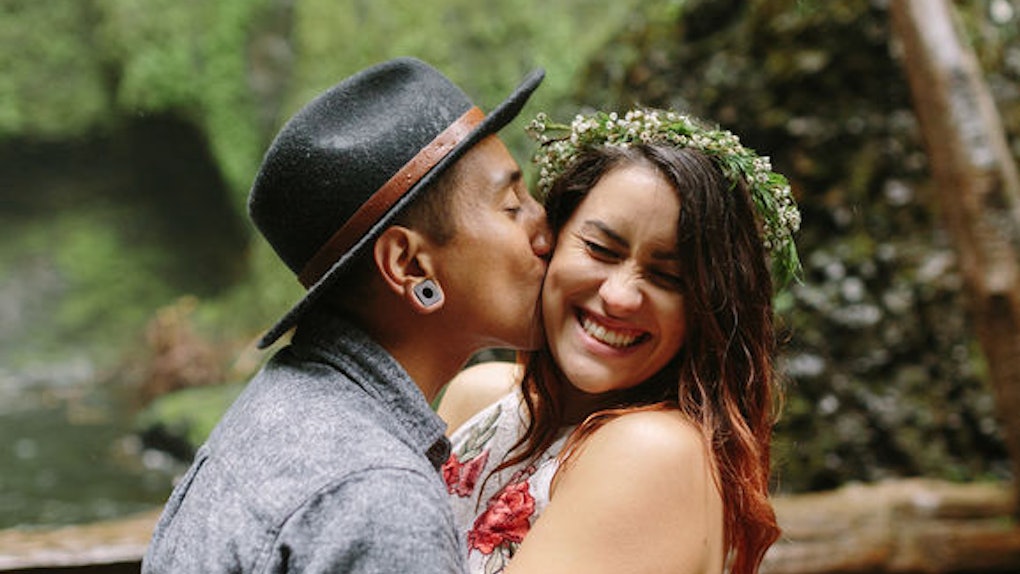 If you’ve ever had a front row seat to a friend or family member's wedding planning, you likely know two things: It's super expensive and incredibly stressful. Sure, the end result is a beautiful day that celebrates your love and commitment, but man does it takes a lot of hard work and hard-earned cash to get there! Yes, there's always the option to elope instead, but it will probably mean sacrificing sharing the day with all your friends and family, who can get pretty intense about being included. Well, a recent Reddit thread in which women reveal why they eloped gave me the answer to why the sacrifice was worth it — or really, if it was even a sacrifice at all. And honestly, I totally get eloping now.

The fact is that your wedding day — whether it's full of all the big, over-the-top traditions, or a simple, quiet ceremony at the courthouse — is a deeply personal decision. As such, it should really reflect what you want. And for some folks, that means a no-frills justice of the peace situation, or slipping off for a destination wedding for two. So, if you're on the fence about what kind of wedding is right for you, consider these Redditors' stories about why they chose to elope and how they feel about that decision now.

A big traditional wedding was just not her thing.

I've just never wanted a big wedding and neither has my husband. To be honest, I think weddings are pretty boring, and after buying a house not long ago we didn't have much to spend on a wedding anyway and didn't want to get in debt for it.

For a long time we thought we just wouldn't get married, but for legal rights etc it's just more convenient. Went to the courthouse with two witnesses and told everybody else afterwards.

The only thing I didn't like about it was keeping it secret beforehand. We saw a lot of friends and family in the months before we got married and I felt slightly weird and guilty not telling them about this big thing we had planned. I was relieved to tell everyone when it was over. Fortunately everyone took it well and nobody was offended.

The time to elope was right — and so was the price.

In terms of stress and money, we have an extra $18K in the bank that we wouldn't have. We went on a long honeymoon (we live in the U.S). We have taken several short trips with the money, updated our house to rent, and have saved about 1/2 of the money... for all those reasons, coupled with the fact that we were living 4 states away and planning a wedding would be tough, it was totally worth it.

I've always wanted to BE married more than I wanted to GET married. In that way, I have 0 regrets and love being married.

She decided to skip all the stress of planning a wedding.

I don't particularly like weddings or enjoy going to them. From the day we got engaged, neither of us had a real interest in planning one. We both have big families (especially mine, with both parents remarried) and the idea of entertaining that many people seemed daunting, and not the least bit special.

Our wedding would probably be considered a "semi-elopement." We took a road trip 12 hours away to the mountains to get married. Our parents, photographer, and the officiant met us out in the middle of nature for our ceremony.

Was it worth it? Yes, absolutely. There was a deer in our wedding photos. I'd recommend it to anyone who is considering eloping. If your heart isn't in the planning, you will be miserable.

We eloped on a cruise ship and it was perfect for us. Wouldn't change a thing!

We eloped because family situations made wedding planning difficult and stressful. I have very little contact with my family because of abuse and his family is really really big.

What happened in Vegas did not stay in Vegas.

It was fantastic. We'd only been together 9 months. Got too drunk in Vegas, I proposed to him. My family was the type to place emphasis on the marriage, not the wedding, so I knew they'd be cool with him as a son-in-law. I'm a firm believer in "when you know, you know" so we did. The next morning we got married in jeans and flip flops with buy-one, get-one rings and we had to rush out because we had Cirque tickets. I love that we did it. It's a story I'll tell for years because the whole thing is hilarious.

Wedding planning was too stressful, so we eloped to Vegas and got married by "Elvis". No regrets.

They preferred to keep their wedding private and drama free.

The idea of being the center of attention for a day was absolutely terrifying to me. Plus not throwing a party saved us so much money.

We didn't keep it a secret, so I don't know if that counts but we went on vacation to a tropical place and had a private ceremony — just he and I, a photographer as witness, and the preacher guy. We didn't want to spend a lot or deal with the stress of a larger wedding and we're pretty private people — didn't want to be in the spotlight. Yes, I absolutely recommend it for those who feel the way we do. It was an awesome day.

A different kind of traditional wedding.

My family all elopes, it's a tradition practically. I asked him while we were driving one day if we should get married and we made the decision to only invite one of our friends, hired a photographer, got some suits and a dress, a commissioner and went into a local park and good married in the trees. It was perfect, 0 regrets.

They eloped because love is love.

We eloped because same sex marriage is not legal in our country. I love it because it was the perfect excuse. Everyone talks to little girls like they all want a big wedding or at least they they will definitely want to get married. It always gave me anxiety. Before I met my wife, I had no interest in marriage. The though[t] of a traditional wedding is torture. So elopement it was. Friends and family tried to convince me to hold a party or something back home. No way! I dodged that bullet. It's the only silver lining of living in a country where my marriage is not recognized.

There is so much pressure to do a big fancy wedding, and if that’s your dream, great. However, for some folks, having a private — or even secret — wedding is the right way to kick off a life together, and that’s a beautiful thing, too. Follow your bliss.