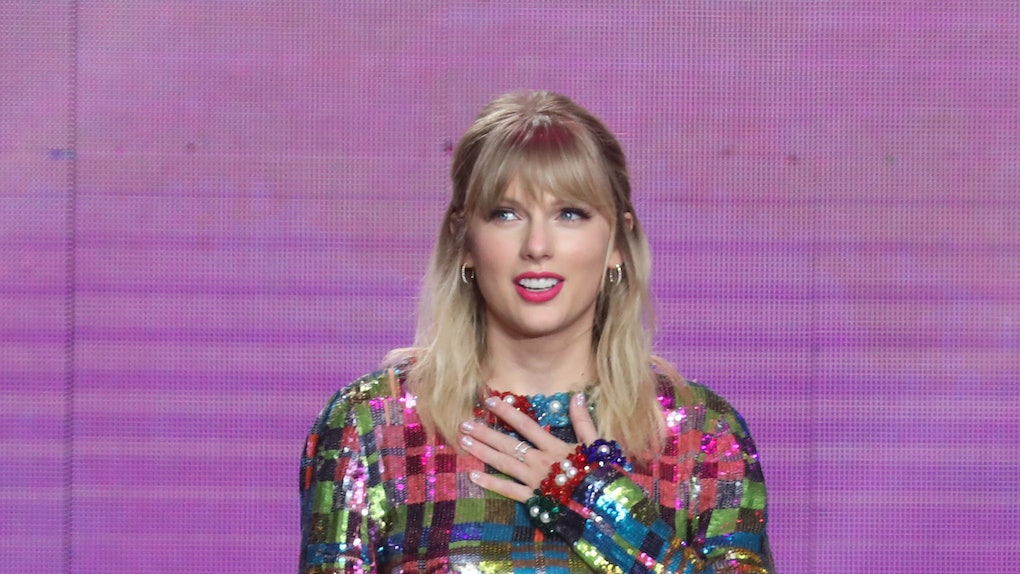 Taylor Swift undoubtedly has one of the catchiest music catalogs of all time. With 13 Grammys under her belt, she's got a go-to set of tracks to choose from when looking to show off your vocal range in the car, in the shower, or in a YouTube cover video. Her ballads are silky and sweet, while her uptempo tracks are absolute bops. No wonder professional recording artists, and amateurs alike, love to produce their own Taylor Swift covers. It's a truly unique way for a fan to pay homage to (or even get the attention of) their favorite artist.

Plus, artists seriously love it. Musicians are floored when they learn a fan poured their heart and soul into a cover. Billie Eilish's jaw dropped when a fan attempted a run she's never even heard covering "Lovely" and Halsey basically hollered throughout an entire video of fans covering her songs.

Swift was just as shocked when she learned Keith Urban performed an impromptu cover of "Lover" during his performance at the Washington State Fair on Aug. 31, 2019. She shared the video on her Instagram, calling it "beautiful." Now, if she could hear all of the incredible renditions below, I think she'd say the same thing.

On Oct. 25, 2014, Clarkson performed her own soulful spin on Swift's "Shake It Off" during her concert in Buffalo, New York. The slow and smooth rendition sent Swifties and Clarkson fans everywhere screaming. Press play above, and you'll see I mean that literally.

The Voice contestants love covering Swift's music and their creative spins are nothing short of amazing, like this gritty, soul-stirring rehash of "Style" performed by Breman on Nov. 11, 2019.

See what I mean about Swift music on The Voice? Acero's downtempo take on Swift's "Style" that showcased her powerhouse vocals was incredibly well-received during the October 2015 blind auditions. Within 10 seconds of performing, Gwen Stefani and Pharrell turned their chairs.

No list of covers would be complete without a ukelele cover, and Johnson's version is such a pure take on Swift's lovers' classic.

Prepare to have your mind blown. This impressive cover of Swift's "Out Of The Woods" performed by Holfelder was accompanied only by sounds made on an iPad, if you can believe it.

This band is known for infusing their pop-rock sound with new-age elements, like synths. However, they stripped their usual sound for a jazzy, R&B take on Swift's "Blank Space" while performing at the BBC Radio 1 Live Lounge on Nov. 18, 2015.

This cover is accompanied by an incredible visual of Tsui harmonizing with himself in an a cappella version of "Bad Blood." Impressive, to say the least.

Known for her deep and soulful sound accentuated by scatting, Jessie J's rework of Swift's "I Knew You Were Trouble" at the BBC Radio 1 Live Lounge on Sept. 19, 2013, turned the uptempo track into a powerful ballad.

A year after Fifth Harmony was formed in 2012, the pop group recorded a hauntingly beautiful rehash of Swift's "Red" in April 2013. They slowed it down, adding their own special harmony that really took the song to a whole new level.

More like this
Doja Cat's Quotes About Her First Original Song Will Crack You Up
By Brandy Robidoux
Taylor Swift's Best Live Performances Through The Years Are Absolutely Mind-Blowing
By Brandy Robidoux
These Tweets Comparing Billie Eilish's 'Happier Than Ever' & Ariana Grande's 'Sweetener' Covers Are A Lot
By Sydney N. Sweeney
Stay up to date