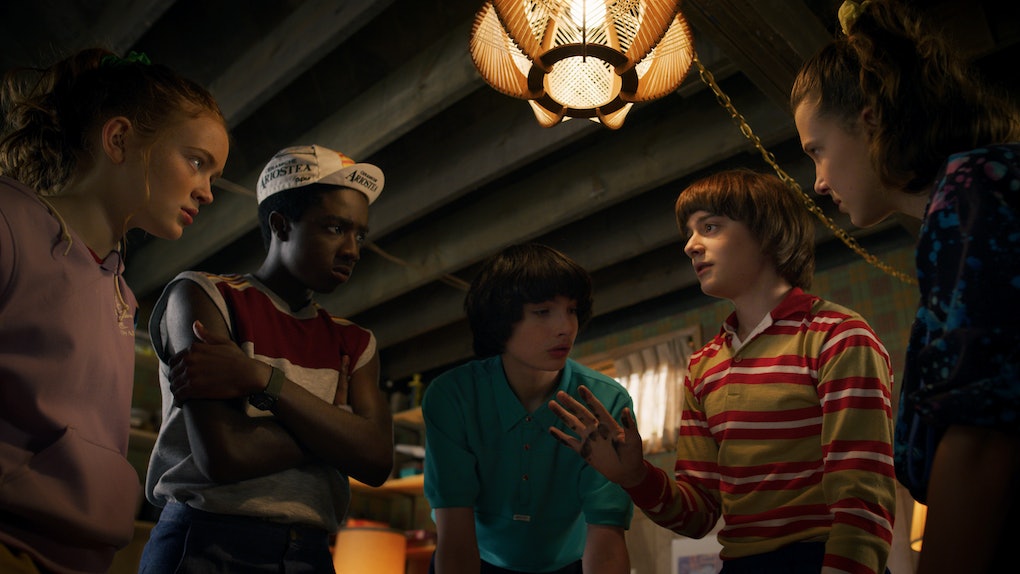 From the beginning, Stranger Things has been all about '80s cultural references. One might argue the show's initial pitch, "Steven Spielberg meets Stephen King," bakes the idea that this is a patache of '80s media tropes into the show's DNA. From the first season onward, one of the most fun games for nerds who love it is picking out all the references to other media in the series' episodes. These Stranger Things Season 3 easter eggs are proof the show has a long way to go before it runs out of material.

The most significant reference this season is, naturally, Back To the Future. The first movie in this nerd touchtone franchise arrived on the Fourth of July weekend 1985, the exact point when the show is set. Not only is it playing in theaters, and discussed by a very stoned Steve and Robin, but there are tons of extra references thrown in as well. El's skateboard is the same one as Marty McFly, and the clock in Mrs. Driscoll's house is the same owned by Doc in the movie. Huey Lewis gets included in the season premiere soundtrack. And even though Billy might not be going 88 miles an hour as he tries to drive into the disabled station wagon outside Starcourt, the shot is almost identical to Doc and Marty's first ride through their own mall parking lot in the film.

Let's go over the rest of the easter eggs in Stranger Things Season 3.

Dawn of the Dead isn't just a movie Mike's squad goes to see at the mall. The escalator slide sequence they execute is from it too, along with, you know, half the town becoming possessed and all.

The "Dustin's Toys Walking" scene used to open the Season 3 trailer is also one of it's more famous references, from these scene in 1985's Making Contact.

Fast Times was the ultimate teen film of the early 1980s, and there are two direct references. One is Steve's sailor costume. (In Fast Times, Judge Reinhold wears a pirate outfit to serve burgers.) The other? The famous pool scene recreated here by Mrs. Wheeler.

Speaking of the pool sequences, the series also pulled from another raunchy teen comedy from the era. The Heather/Billy exchange is straight from Caddyshack.

Nancy's close encounter with the Mindflayer in the hospital is a direct visual reference to the Alien franchise, specifically Alien 3's famous scene where the Alien drools on Ripley.

Did that outfit Hopper was wearing feel a little over the top? That's because it's directly inspired by the sorts of things Tom Selleck wore in his favorite show, Magnum P.I. (The same show he's trying to watch in the season premiere when El won't leave the door open.)

Speaking of Grigori, his single-minded chase of Hopper is 100% taken from the original The Terminator movie, down to that popped collar look.

Steve and Robin's rolling on MDMA after being injected with it as the "Russian Truth Serum" isn't just pulled from 1970s drug experimentation. It's also a reference to the 1990 film True Lies.

The NeverEnding Story took center stage with Suzie and Dustin's HAM radio call, but don't sleep on her A Wizard of Earthsea references. Dustin's girl has good taste in books.

More like this
Lana Condor's Career Goals Are All About Representation — EXCLUSIVE
By Rachel Varina
This 'Stranger Things 4' Theory About Eleven's Past Is Super Dark
By Ani Bundel
'Emily In Paris' Season 2: Premiere Date, Trailer, Cast, Filming News, & More
By Dylan Kickham and Ani Bundel
Stay up to date