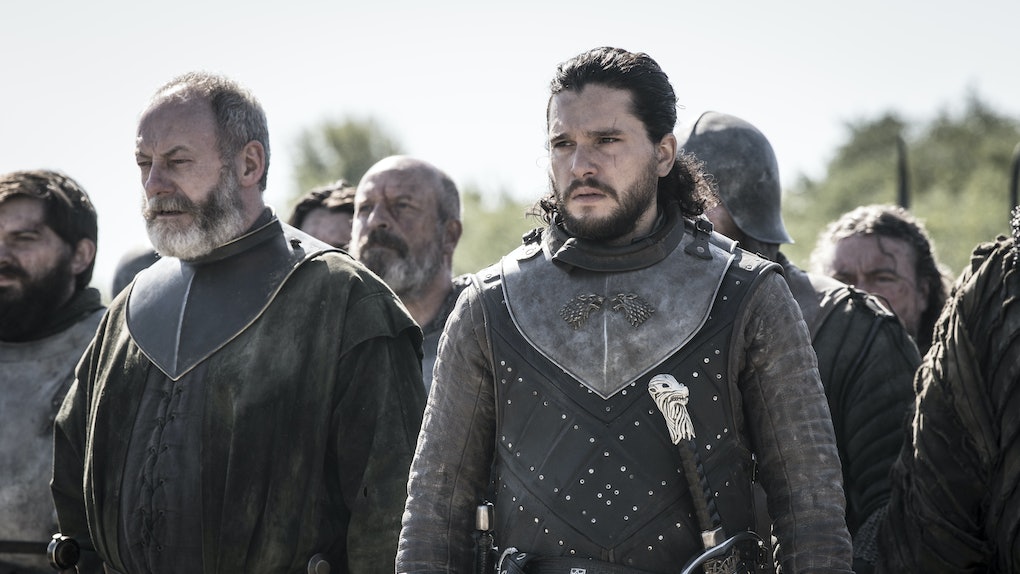 The world's weekly dose of medieval fantasy drama is coming to an end. The eighth and final season of Game of Thrones concludes on May 19, but chances are that fans can stretch that finale adrenaline to last for weeks' worth of memes and intricate breakdowns. Once that finally gets old (but no judgment if you want to live in the Thronies bubble forever), you'll have to look toward other shows to fill that hole in your life. Let's break down the best shows to watch now that Game of Thrones is over.

The HBO drama captivated viewers from the start with its outlandish fantasy setting and intricate characters. Although Game of Thrones began as an adaptation of George R.R. Martin's book series, the creative team surpassed the novels' timeline in Season 6, taking the story in a new direction. Thankfully, the world of TV loves snatching up a fantasy or historical fiction book to adapt for the small screen, and there's plenty of material similar to Game of Thrones just waiting for you to discover.

The following are reminiscent of Game of Thrones in several ways. Whether you're in the mood to visit a historical kingdom, explore a world of magic, or indulge in medieval characters' hookups, there ought to be something here to soften the Game of Thrones blow.

Based on Diana Gabaldon's long-running book series, Outlander doesn't have dragons, but you'll find men in kilts, a historical setting, and time travel instead. Although the Starz series will likely air its fifth season within the next year, new viewers can begin catching up when Netflix starts streaming the first two seasons. Outlander introduces Claire, a former war nurse in 1945, as she is magically transported to 1743 Scotland. With her husband back in the 1940s, Claire falls in love with Highlander soldier Jamie, igniting a star-crossed romance that literally travels across oceans and time as the show progresses.

If the battles and strategic alliances on Game of Thrones were never your thing, you probably stuck around for the characters' romances and other relationships. Those craving more historical love stories with a hint of truth should check out The Tudors, which tackles the lives of King Henry VIII and his six wives in a particularly engrossing, sexy way. The drama frequently goes for fiction over fact, but with a cast that includes a pre-Game of Thrones Natalie Dormer and a pre-Superman Henry Cavill, I'm not complaining.

3. 'A Discovery of Witches'

Think of this series as an academically inclined mashup of Twilight and Chilling Adventures of Sabrina. Diana is a witch uncomfortable with her powers when she unknowingly retrieves a magical text that has been missing for centuries. Her research at Oxford is further disturbed when vampire Matthew offers to help her make sense of the magical secrets suddenly emerging. Having premiered in the UK before its U.S. debut, A Discovery of Witches has already been renewed for two more seasons. The show is also based on Deborah Harkness' book trilogy, so you have time to blaze through the original story before the TV series continues.

Given Game of Thrones' hefty background information, it's easy to forget that these characters are fictional, but Spartacus combines Game of Thrones' love of battle scenes with a slight sense of truth. Spartacus was a gladiator who led a slave uprising against the Roman Republic, but just as plenty of viewers started Game of Thrones without reading the books, you can try out Spartacus without knowing the real story. If you or the people at your Game of Thrones viewing parties prefer action over talk, the Spartacus characters' drive for vengeful, often violent results may be the perfect fit for you.

Like The Tudors, Reign places real historical figures into a more dramatic, fictionalized world. If you saw Saoirse Ronan as the titular character in Mary Queen of Scots, the first two seasons of Reign are essentially everything that happened to Mary before that movie starts. Although the show's later years cover Mary's well-documented conflict with Queen Elizabeth I, the early seasons follow Mary's marriage to France's Prince Francis and their eventual rise to the throne. Parts of it may feel like a frothy Gossip Girl episode, but the political intrigue and royal court shenanigans will remind you of Game of Thrones' more domestic storylines.

If you prefer your history with more of a legendary twist, BBC's Merlin delves into the myth of Merlin the wizard and his friendship with the future King Arthur. The two leads appear as young men in the series, which begins when Merlin arrives in Camelot and has to hide his powers due to magic being outlawed there. Even if you're familiar with Arthurian legend, Merlin is ideal entertainment for fans of Doctor Who or deep dives into George R.R. Martin's medieval world.

Created by former Lost producers, Once Upon a Time plops unaware fairy tale characters into the real world as a result of an evil queen's spell. While the first season goes back and forth between present-day stories in a small Maine town and the past in a picturesque magical land, following seasons involve more adventures into different storybook realms. Like Game of Thrones, the show even has an onscreen romance that came to fruition IRL. Ginnifer Goodwin and Josh Dallas played Snow White and Prince Charming, eventually fell in love with each other at work, and got married in 2014.

Versailles initially details the circumstances behind the grand renovation of the French royal family's Palace of Versailles in 1667, but of course it comes with juicy and irresistible twists that somehow didn't make it into the history books. The series definitely rivals Game of Thrones' mixture of politics, family drama, and sex, so dragons aside, Versailles might be the most similar substitute to fill the drama's void.

Based on Lev Grossman's book series, The Magicians tackles the question the Harry Potter series leaves about whether seven years of magical education is sufficient enough for Hogwarts grads. The series takes place at a magical university where graduate student Quentin learns that the world from the fantasy book series he loved as a child is real and a danger to his society. The series also follows the path of his friend Julia after the university turns her down and she finds a resource for her magic elsewhere. If you're still trying to get over the magic of Jon Snow's resurrection, distract yourself with this other magical mythology.

Not everything can be about family alliances and dragons, so if you need a complete tonal cleanser after Game of Thrones, ditching its tunics for the suits of Boardwalk Empire might be the right move. Set in Atlantic City during the Prohibition era, the HBO series focuses on the area's prominent political mastermind Nucky Thompson and incorporates both real and fictional characters into its vibrant world. After eight years in Game of Thrones' ancient world, a visit to the somewhat recent past could help soothe that post-finale sorrow.

Good luck with recovering from the battle for the Iron Throne!