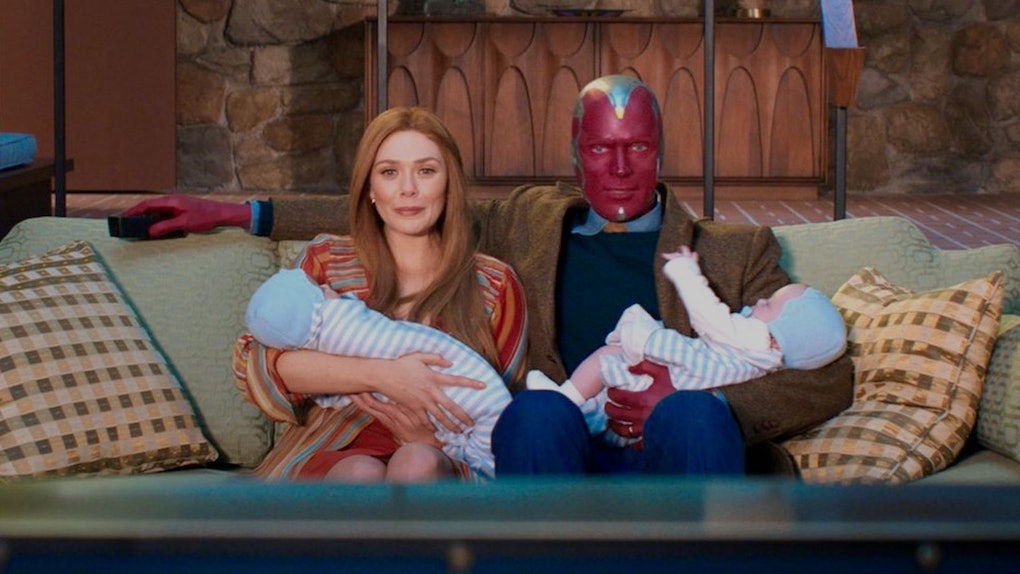 10 Shows Like 'WandaVision' To Fill The Hole In Your Heart

Whether you're a diehard Marvel fan or someone who loves classic sitcoms, WandaVision managed to cast a spell on pretty much everyone at the start of 2021. The reality-bending series is hard to compare to other shows, even though it parodied a ton of beloved TV hits throughout its episodes, so superfans might be having a hard time finding something else to watch now that it's over. Don't worry, though — these shows like WandaVision are perfect for anyone searching for their next TV obsession.

The chaotically unpredictable story of Wanda Maximoff's altered reality made for the first must-watch show of 2021, but despite the undeniable success of WandaVision, it doesn't sound like there will be a second season. The Disney+ series was created as a way to set up the upcoming Doctor Strange sequel, Doctor Strange in the Multiverse of Madness, which will also star Elizabeth Olsen as Wanda. Since fans probably shouldn't get their hopes up for a surprise return to Westview in the years to come, there are still a good amount of similar shows that can tap into what you loved about WandaVision. Whether you want more of the witchy magic, the raw and emotional depiction of a superhero dealing with grief, or to keep swimming in the Marvel television pool, here are some shows you should consider adding to your watchlist:

The show that matches WandaVision's reality-warping weirdness the best is definitely Legion. Also based on a mutant in the Marvel comics, the FX series centers on David Haller, who has trouble separating reality from illusion due to his diagnosed schizophrenia and powerful psychic abilities. Like Wanda, David's incredible powers tend to create fantastical scenarios, leading him on an adventure to meet more mutants.

Wanda is able to tap into the full extent of her superpowers through grief and loss, which is something the Hargreeves siblings in The Umbrella Academy are all too familiar with. While the superpowered siblings don't exactly create their own reality like Wanda does, they do mess with space and time quite a bit in their efforts to evade the Commission and prevent various apocalypses.

If WandaVision has you itching for another badass but damaged superhero using her powers to navigate trauma, look no further than Jessica Jones. After being controlled for years by a particularly devious villain, the super-strong detective takes on some dangerous cases in New York City. The Marvel series may not be as trippy as WandaVision, but it's definitely worth checking out if you loved the emotional exploration of Wanda's grief.

Before WandaVision, the Marvel television shows remained largely disconnected from the universe of the movies, but Agents of S.H.I.E.L.D. was a notable exception. The seven-season ABC show chronicles the adventures of the secret government agency S.H.I.E.L.D., which often overlapped with the Marvel movies. Although WandaVision focuses more on S.H.I.E.L.D.'s counterpart S.W.O.R.D., it's still a good watch for anyone who wants more Marvel lore, and the show even includes a few shoutouts to important objects and characters in WandaVision.

If witchy women are your thing, then Chilling Adventures of Sabrina will be right up your alley. The dark Netflix series is much more hellish than WandaVision, but it also centers on a powerful witch learning to hone her incredible powers. It's a perfect choice for anyone looking to keep the magic alive after finishing WandaVision.

WandaVision mixed eye-catching superheroics with grounded, emotional drama in a way that is reminiscent of the NBC series Heroes. The cult-beloved show, which ran from 2006 to 2010, depicted several people discovering their unbelievable powers and learning how to use them. Similarly to WandaVision, these heroes were forced to learn quick as shady government agencies tried to track down and control them.

WandaVision parodied a ton of classic sitcoms throughout its run, but the clearest inspiration for the show was the '60s series Bewitched. That show is all about a witch who settles down in suburbia with her mortal husband, a clear echo of Wanda's idealistic life with Vision. If you really want to dive into the WandaVision source material, checking out Bewitched should be the first thing you do.

Although witches have a unique place within the Marvel comics, they haven't really shown up in the Marvel Cinematic Universe too much. WandaVision changed that by finally revealing Wanda as the Scarlet Witch and going into some witchy history with another magical character, but there is actually one other Marvel series in which witches reign supreme. Hulu's Runaways centers on a group of young heroes, one of whom can cast spells using a magic staff. Witches become even more prominent in the show toward the end of its three seasons.

Maybe the piece of television that comes closest to WandaVision's story is the Season 4 premiere episode of Black Mirror. The episode focuses on a programmer who uses the DNA of his coworkers to trap them within his fabricated Star Trek-inspired world, much like how Wanda trapped the residents of Westview within her own twisted take on reality. While the stories aren't exactly the same, they're definitely close enough that anyone who enjoyed WandaVision should check "USS Callister" out.

WandaVision let Marvel fans explore an entirely new side of magic, and if you want to keep getting lost in vast, weird worlds, American Gods is a perfect choice for a follow-up watch. The fantasy series depicts an ongoing war for relevance between the Old Gods (ancient names like Odin and Anubis) and the New Gods (deifications of things we worship now, like technology and media). It's more of a sprawling adventure series than WandaVision, but it delivers some of them reality-bending magic fans loved.