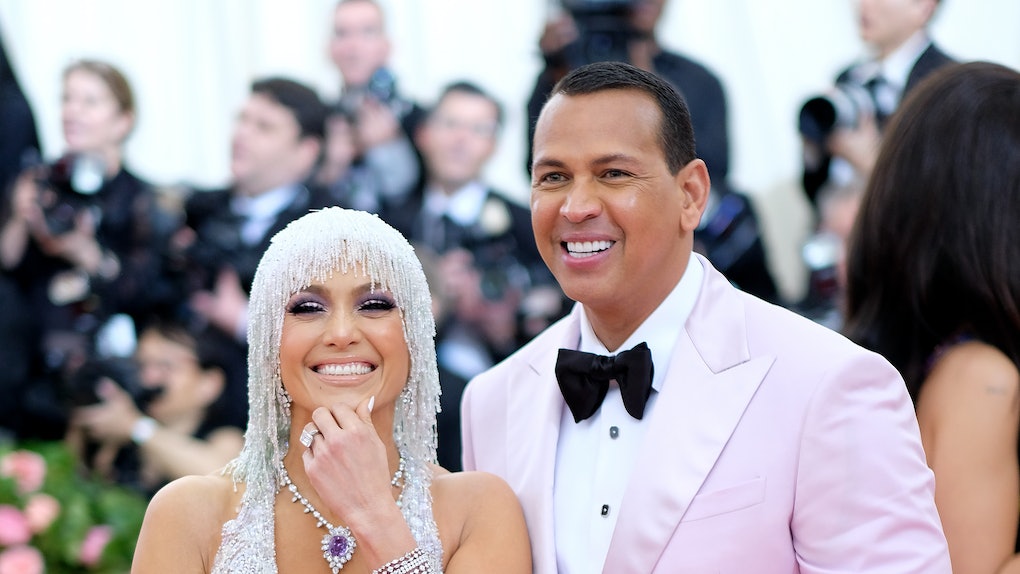 The 2019 Met Gala was held on Monday, May 6, and oh boy, did some of our favorite celebs really deliver on the camp theme. No, not camping as in R.E.I. and tents and sh*t. Camp as in extravagance! Eleganza! Outrageous aesthetics! Basically, everything Lady Gaga lives and breathes. While the celebs partied the night away in their over-the-top looks, there was one rule, in particular, they had to follow that Vogue Editor-In-Chief Anna Wintour implemented in 2015: no selfies. Of course, people ended up breaking that rule. And there are photos of celebrities who broke the no-selfie rule at the Met Gala to prove it.

The Met Gala is fashion prom. It's quite literally the fashion industry's biggest day of the year, and the Gala's attendees always show up and show out for it (whether their looks are on theme or not is another matter...). Rihanna, de facto queen of the Met Gala, wasn't there for the first time in forever, upsetting this particular fan who was very ready to see what Queen Met Gala would churn out for this year's theme. Luckily for us, Met Gala co-chair Lady Gaga showed up in four different outfits, revealing each one on the red carpet. She knows camp! And she also follows the rules, as she wasn't one of the celebrities posting selfies throughout the night.

The celebrities who did break the no-selfies rule are right here, officer!

Alex Rodriguez posted a selfie with him, fiancée Jennifer Lopez, Kim Kardashian and Kanye West both on his Instagram story and Instagram grid, and he even acknowledged the fact that he was breaking the no-selfie rule in his caption. Bold!

"Had to take a selfie with @kimkardashian and Kanye! @jlo #MetGala #AllThePink," the retired baseball player said. Did you, Alex? Did you?

Tennis champ and all-around queen Serena Williams (who was also a Met Gala co-chair this year, along with Lady Gaga and Harry Styles) posted a selfie video from the red carpet just before she and her husband, Reddit co-creator Alexis Ohanian, made their entrance. Based on the background noise in the video, this was when Lady Gaga was making her huge entrance.

Williams also posted a bathroom selfie with Ciara later in the evening, adding another celeb to this list of rule-breakers.

Lizzo was the celebrity who probably broke this rule the most last night. Her Instagram story was flooded with selfies (both photos and videos) with other Met Gala attendees.

The two Riverdale stars broke the no-selfie rule when they posed for a shot on Petsch's Instagram story. Reinhart also posted some shots of a campy cupcake the guests were served, as well as a selfie video of her eating the hat off of said cupcake. (Yes, the cupcake had a person wearing a hat on it, and the cupcake was the skirt. And what about it?!)

The Daily Show host posted a Met Gala selfie that nearly puts that infamous Oscars selfie to shame. Straight from the red carpet, Noah posted a video of him, Lupita N'yongo, Tessa Thompson, Laura Harrier, Pedro Pascal, and more to his Instagram story. He later posted a selfie video of him and Idris Elba doing impressions of each other on his story. Rule-breaker!

Also posted straight from the red carpet was two selfie videos on Kim Kardashian's story. She posted the videos showing off her Met Gala look, saying "straight out of the ocean, guys, onto the red carpet." And right into this article about celebrities who broke the no-selfie rule!

In all honesty, I can't shade any of these celebs for taking selfies throughout the night. If I were at the Met Gala, you can bet my a** would be taking selfies galore to document the night for my own memories. But I can say with confidence that Lizzo definitely broke the rule the most.

More like this
The 25 Sexiest Comments Made By Celebrities On Their Partners' Instagrams
By Corinne Sullivan
These Videos Of BTS Messing Up & Recovering Flawlessly Prove They're Master Performers
By Michele Mendez
Here's Every BTS Video That's In The Bangtan Universe, So You Can Catch Up
By Michele Mendez
Stay up to date