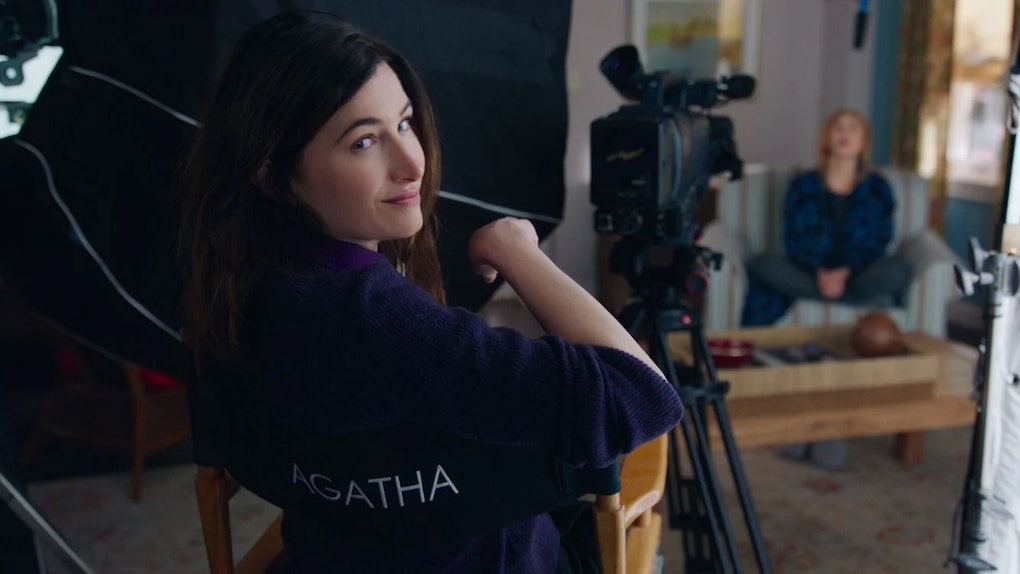 Landing a project in Disney's Marvel Cinematic Universe can be like punching a ticket direct to A-list stardom. At least, that's how it's been for the big-screen films. Now that Marvel Studios is moving to the small screen, that star-making magic seems to be following. Case in point: Kathryn Hahn, who has shot to household name status thanks to her turn as Agnes/Agatha on WandaVision. But don't get it twisted: Kathryn Hahn has been a TV and movie staple for *years,* starring, co-starring, and guest-starring in projects that span from blockbuster comedies to serious dramas.

That's not to say anyone who is newly obsessed with Hahn shouldn't be. Every week of WandaVision's nine-episode run, Hahn's role as Agatha has been a showcase for her comedy chops. As the prominent sidekick neighbor in Wanda's world, she strutted her stuff doing parodies of a variety of sitcoms, from the vaudevillian comedy of the show's premiere to the present day Modern Family-style humor of Episode 7. Moreover, she's also gotten to do the broad scenery-chewing of a cartoon villain in the show's penultimate episode once WandaVision revealed her character's true identity.

For most actors, that would be enough, But Hahn has also found herself with a surprise hit single, "Agatha All Along," and a wildly popular meme based on her character. Simply put: If you didn't love her before, WandaVision has changed that. With the Hahn-aissance in full swing, let's run down some of her most significant roles to date:

Kathryn Hahn's first significant role in TV was back in the early aughts, when she landed the role of Lily Lebowski as part of the crime drama Crossing Jordan. She started as a perky sidekick secretary-type before her character transitioned into the role of a grief counselor. Hahn remained in one of the leading roles over the show's six-season run.

Hahn's run in the traditional sidekick role extended to the big screen too. One of her first major film appearances was as Andie Anderson (Kate Hudson)'s BFF Michelle Rueben in the hit rom-com How To Lose A Guy In 10 Days. Michelle's breakup inspires Andie to write the titular article that sets the film's events in motion.

3. 'Anchorman: The Legend of Ron Burgundy'

Hahn's comedy work took a step up when she landed the role of Helen in Adam McKay's Anchorman film. The Will Ferrell-led film was a box office smash and set Hahn up to work with McKay on future projects. Hahn later reprised her role in the direct-to-video sequel Wake Up, Ron Burgundy: The Lost Movie.

Hahn parlayed her success in Anchorman to another McKay film, Step Brothers. The Will Ferrell-John C. Reilly comedy featured Hahn as Alice Huff, who starts as the sister-in-law of Ferrell's Brennan but winds up as the love interest for Reilly's Dale.

Hahn's work didn't just stick to the big screen. With the lines blurring between "TV actors" and "movie actors" in the 2010s, she found herself one of many big names who lent their talents to the hit series Parks & Rec. Hahn played the recurring role of Jennifer Barkley and is considered one of the show's more prominent celebrity guests, having appeared in 11 episodes all told.

Meanwhile, on the big screen, Hahn finally landed her first leading role in Afternoon Delight in 2013. The film got mixed reviews, but Hahn's work as Rachel, a frustrated stay-at-home mom who takes up a complicated relationship with a sex worker, was generally praised.

After Hahn's turn in Afternoon Delight, her next role was back on TV again. She landed what started as a recurring role as Rabbi Raquel Fein in Transparent's first season, which was then upped to a main role by Season 3. Although it reduced again to a guest-star position for Season 4, it once again was billed as a primary role for the Amazon show's musical finale.

Hahn's work on Transparent then landed her the leading role in creator Joey Soloway's next Amazon project, I Love Dick. Based on Chris Kraus's novel, Hahn played a fictionalized version of Klaus on the show, whose infatuation with the titular Dick drives the story. The series only lasted one season, but Hahn's quirky performance was one for the ages.

9. 'Spider-Man: Into the Spider-Verse'

Lots of comedians do voiceover work as part of their careers, and Hahn is no exception. She's done roles in everything from Bob's Burgers to Hotel Transylvania 3: Summer Vacation. But her most prominent onscreen animated role came via another Marvel project, in Sony's Spider-Man: Into the Spider-Verse. She played the gender-swapped version of one of Spidey's most recognizable antagonists, Doc Ock, as Olivia Octavius.

Hahn's other significant role right now is also animated. Since 2020, she's voiced Paige Hunter as part of the cast of AppleTV+'s Central Park. With a two-season straight-to-series order and Season 1 already out, the show will give fans at least one more season of Hahn as Paige later in 2021.

More like this
Kathryn Hahn Hopes To Explore Agatha's Backstory In Future Marvel Projects — EXCLUSIVE
By Dylan Kickham
Here's How To Stream 'Nomadland' So You Can Finally Get The Hype
By Rachel Varina
Is Netflix Making A 'To All The Boys' Spinoff Series About Kitty? Here's The Tea
By Rachel Varina
Stay up to date