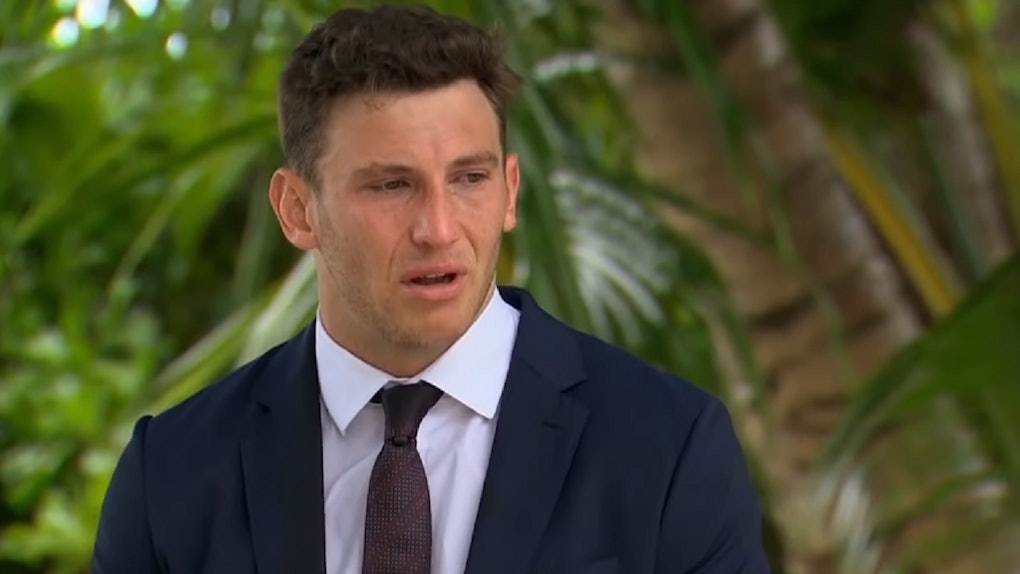 10 Most Devastating 'Bachelorette' Rejections That Will Leave You Shook

Every Bachelorette season starts in a whirlwind of fun and laughter, but several weeks into this journey for love, the tears definitely flow more than the champagne. A leading lady's rejection of at least one man in her season finale usually results in tears, and depending on how attached the audience is to a contestant, Bachelor Nation may collectively shed tears too. With the end of Hannah Brown's season comes the possibility for an addition to the most devastating Bachelorette rejections, so why not revisit these moments to prepare your emotions?

While a Bachelorette's goodbye to her runner-up is typically the most heartbreaking exit of the season, other eliminations throughout a season can be just as upsetting. The majority of rejections below come from the Bachelorette proposal stage, but a few come from mid-season eliminations that are particularly memorable for the contestant's reaction or what happened afterwards. The worst is likely yet to come on Hannah's ongoing Bachelorette season, but compared to the exits that have already become legendary in the show's history, maybe things won't be so bad.

So grab your tissues and some wine, because this trip down memory lane will be the most dramatic in Bachelorette history.

1. Peter Shies Away From Proposing To Rachel (Season 13)

Rachel Lindsay and her Final Rose pick Bryan Abasolo are finally tying the knot in August 2019, but fans watching her Bachelorette season were sure she'd end up with hunky personal trainer Peter Kraus. Before Hannah Brown's Peter wooed Bachelor Nation with his kissing skills, this Peter essentially did the same, winning over viewers with his distinguished looks and Midwestern manners. But he was consistently vocal about not wanting to propose after such a speedy relationship, as he equated engagement with marriage and a lifelong relationship.

While Peter wasn't down to enter a quasi-serious Bachelor engagement, Rachel accused him of not knowing what he wanted. The two parted ways after Peter claimed she would regret the decision, but it's their tearful final moment together that still has Bachelor Nation shook. That kiss! The long embrace! Rachel crying off her false eyelashes! Throw in the injustice of Peter never becoming the Bachelor and this is truly one of the franchise's most gut-wrenching breakups.

I don't even know what the most heartbreaking factor of this moment is. Is it Blake Horstmann's total obliviousness of Becca Kufrin's uncomfortable body language? Is it his persistent sweat eventually meshing with his tears? His desperate "I love you" followed by him sobbing into a towel about being alone? It's a pretty painful scene to revisit.

As he was a front-runner all season, viewers couldn't blame Blake for believing that his connection with Becca was the strongest, but not much can beat Final Rose recipient Garrett Yrigoyen reminding her of her departed dad. Blake is now slated to join the Season 6 cast of Bachelor in Paradise while Becca and Garrett are engaged and living together.

Ashley Hebert is best remembered for being the first Bachelorette since Trista Sutter to marry her Final Rose pick, and as she and J.P. Rosenbaum are still together with two kids, it's easy to forget that she even considered another man on the show. Future Bachelor Ben Flajnik was as memorable as the pronunciation of his last name, which might explain why Ashley let him kneel in front of her and deliver a full proposal, including the fatal "Will you marry me?".

Understandably upset that Ashley let him drone on, Ben tried to leave the scene when he realized she was rejecting him. "What I don’t need you to do is sugarcoat it,” he told her. “You can’t leave something like this on good terms. It’s impossible." Despite how harsh this was, things quickly cooled over. Ben got the Bachelor gig and Ashley and J.P. had their happily ever after.

Knowing that he wasn't the one for her, Bachelorette Andi Dorfman broke up with finalist Nick Viall before the proposal stage, but he wasn't so lucky when he reached this milestone on Kaitlyn Bristowe's season. After joining the competition late and clashing with front-runner and eventual Final Rose pick Shawn Booth, Nick had a tough ride leading up to this moment. But like Becca, Kaitlyn's body language screamed of just wanting to get through a painful rejection.

While Nick wasn't ready for their relationship to be over, Kaitlyn stepped in right as he pulled out an engagement ring. Nick pausing and saying, "No?" still has the power to move even the strongest of anti-Nick viewers.

Arie Luyendyk Jr. has made up for breaking a Bachelor engagement in the public eye by marrying his runner-up and appearing to be an attentive father, but long before he was the franchise's leading man, he was the victim of heartbreak. Coming across as a dashing race car driver on Emily Maynard's Bachelorette season, Arie was a steady favorite before becoming one of her final two contestants.

However, Emily ultimately felt a stronger connection with entrepreneur Jef Holm, dumping Arie right before proposals. "You know how I felt about you from our very first date," she tearfully told him. "And even beyond that, I felt like it was gonna be me and you, and I don't know anymore."

After filming, Arie flew to Emily's hometown to leave her a journal of his feelings, but she chose to never read it. Of course, both of them have now moved on, serving as a rare example of a Bachelorette rejection eventually leading to public happy endings on both sides.

Desiree Hartsock ultimately married her Final Rose pick Chris Siegfried, but her season's most memorable moment has always been contestant Brooks Forester leaving the show with only two other men still vying for Desiree's heart. Desiree was head over heels for the Utah native and planned to tell him she loved him on one of their final dates, but her feelings weren't quite reciprocated. While he wished he was in love with her, Brooks couldn't commit to what Desiree wanted and eliminated himself.

With Chris and Drew Kenney left behind, Desiree knew she had to say goodbye to the latter. "I feel like there's maybe something missing," she told a surprised Drew on their last date. "I never, ever in a million years wanted to hurt you. I just know."

Despite feeling blindsided, Drew handled the rejection like a champ, saying to Desiree, "You don't have to be sorry for not being in love with me. It's not something you control, it just happens."

7. Reid Comes Back To Unsuccessfully Propose To Jillian (Season 5)

Where is this moment during all of those Bachelor clip shows? Jillian Harris' 2009 season predates many of the franchise's current viewers, but her finale is truly one of the most dramatic ever. After breaking up with realtor Reid Rosenthal at the final three stage, Jillian was shocked when Reid turned up in the finale to propose after she had rejected runner-up Kiptyn Locke. Although she couldn't deny her genuine connection with Reid, she told him that she had fallen in love with Final Rose pick Ed Swiderski. Reid gracefully stepped away but still told cameras that Jillian was his dream girl.

Needless to say, this moment would have destroyed Twitter and launched a thousand "Reid for Bachelor" campaigns if it happened in 2019.

The finale of Andi Dorfman's season was relatively predictable, but an exit that would have been totally ordinary otherwise turned heartbreaking thanks to IRL news. Contestant Eric Hill was a global explorer with a goal of visiting every country in 1200 days, but shortly after his stint on The Bachelorette ended in real time, he died in a paragliding incident. The show then began with Chris Harrison dedicating the season to Eric, which made his successful one-on-one date with Andi tough to watch.

Later in the season, Andi sent Eric home after he voiced concerns about the slow pace of their relationship and her behavior coming across as acting. With context, the exit felt particularly upsetting, even though a segment with Harrison and Andi commemorating Eric and somber footage of the remaining cast learning of his death later aired on The Bachelorette.

9. Cupcake Chris Sobs After Kaitlyn Breaks Up With Him (Season 11)

Dentist Chris Strandburg first gained attention on Kaitlyn Bristowe's Bachelorette season by driving up to the mansion in a car shaped like a cupcake on the first night. On Chris' first one-on-one date in Ireland midway through the season, Kaitlyn told the beloved contestant that she didn't see a future with him. The breakup sent Cupcake Chris into uncontrollable sobs even after Kaitlyn left him behind on the Cliffs of Moher. Given The Bachelorette's speedy timeline and Chris' limited contact with Kaitlyn, the intense reaction both confused and humored fans, but they couldn't help but sympathize with Chris' emotions.

The Season 15 eliminations with the potential to be most upsetting have yet to air, but Hannah Brown saying goodbye to fan favorite Mike Johnson is already memorable for its pure heartbreak. The Air Force veteran and portfolio manager captivated fans with his megawatt smile, obvious affection for the other contestants, and deep love for the women in his family. While Hannah clearly enjoyed spending time with him, viewers sensed that there was nothing more than friendship between them.

Knowing that she wasn't the right fit for Mike, Hannah greeted him toward the end of their final date with a teary disposition. After she spilled her truth, Mike comforted the shaky Bachelorette, thanking her for her honesty. "This is by far the hardest goodbye I've had to say," Hannah told cameras, "and it's because of how good a human Mike is. Mike deserves to be loved fiercely just as I do." Is that a Bachelor plug I see?

Season 15 of The Bachelorette continues at 8 p.m. ET on Mondays on ABC.