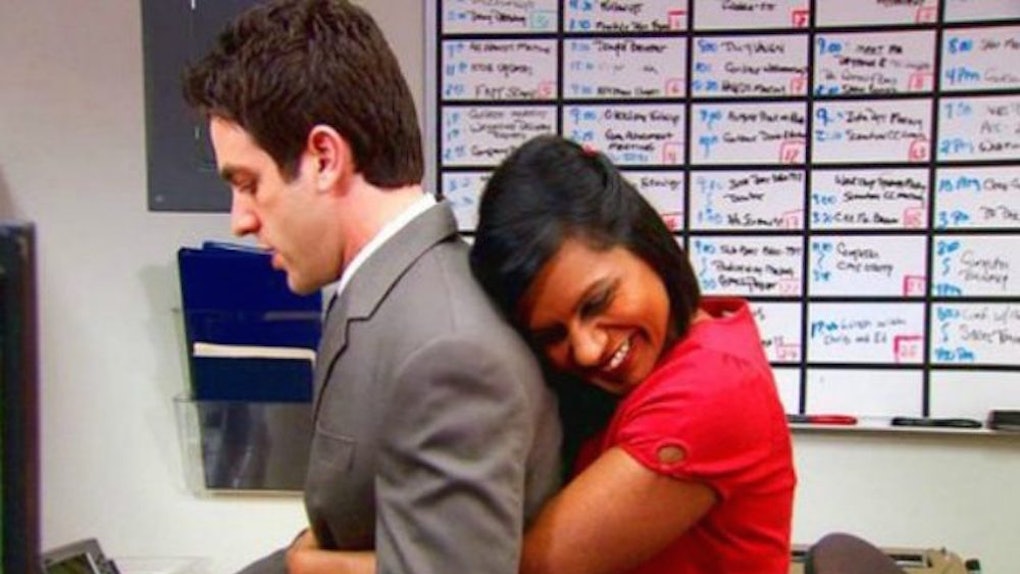 When you think about true Office love, Jim and Pam likely come to mind, right? And Dwight and Angela. Michael and Holly. Phyllis and Bob Vance. But there's one Dunder Mifflin duo whose on-again/off-again situation had audiences wondering until the very end. Kelly Kapoor and Ryan Howard had a rocky relationship that saw good days and awkward ones, made everyone around them crazy, and left viewers rooting for their eventual fairytale ending. These Kelly & Ryan moments from The Office will remind you of just how entertaining this will-they/won't-they couple was.

What makes this on-screen pair even more special is the fact that Mindy Kaling and B.J. Novak just happen to be old pals in real life. They often express their support for one another via social media and have gone as each other's dates for public events in the past. Mindy even opened up about their unique friendship to InStyle in 2015, giving their shippers future hope that they might someday — like their TV character counterparts — end up together. She explained:

I will freely admit: My relationship with B.J. Novak is weird as hell. He is not my boyfriend, but he is not my best friend. I guess you could describe our relationship as a 'romantically charged camaraderie with loud arguments,' but I don't think Facebook would accept this as a new status.

Earlier this year, B.J. congratulated Mindy for her movie star success through a sweet tweet that would melt any Office fan's heart.

Just this week, Mindy posted a photo of white roses that B.J. had sent her to wish her well for her first day shooting the upcoming film Late Night.

Even if these professional partners/close buddies/romantically charged comrades/whatever they are aren't officially together, at least the world has plenty of Kelly and Ryan to enjoy for all eternity.

1. When she made sure her feelings for him were known.

Throughout the relationship, it was clear that the dramatic and enthusiastic Kelly was the one who wore her emotions on her sleeve. Ryan wasn't the greatest boyfriend (yeah, he was pretty terrible most of the time), but there was always that back-of-the-mind wish he would come around.

2. When he picked the absolute worst day of the year to kick things off.

Of course Ryan would hook up with Kelly the day before Valentine's Day. As if he was paying attention to the calendar. Kelly, on the other hand... Well, this means he's instantly her boyfriend.

3. When it was obvious they had fun together.

Sure — Ryan was reluctant to commit for a long time. But catching them in moments like this made it clear there was something there.

4. When she knew him better than anyone else.

Does he love ketchup? It doesn't really matter. Who wouldn't want to double date with Kelly and Ryan? On second thought, don't answer that.

Some of the funniest moments of The Office weren't when Kelly and Ryan were off, it's when they were on the same page. So unexpected, yet somehow so right. This relationship is bananas. B-A-N-A-N-A-S.

6. When Kelly had unrelenting hope they would make it, no matter what.

There were so many versions of Ryan throughout TheOffice's run: Temp Ryan, Boss Ryan, Disgraced Boss Ryan, Post-Thailand Ryan, and so-on...

7. When They Finally Saw the Light

8. When she was a champion for their love. Even if her methods were... controversial.

No, we do not at all condone faking a pregnancy to get a date. But this episode is comedy gold.

9. When she called him out.

You tell him, Kelly. We all know good Kelly is at "smack talk." Plus, she does what she wants and she does it with confidence. Who else would wear white to someone else's wedding and call it an "emergency" ("I look really good in white") or refer to herself as one of few people to "look hot eating a cupcake"?

I wouldn't recommend sharing The Annex with this often-tumultuous twosome (poor Toby), but you have to admit — they're pretty darn cute sometimes.