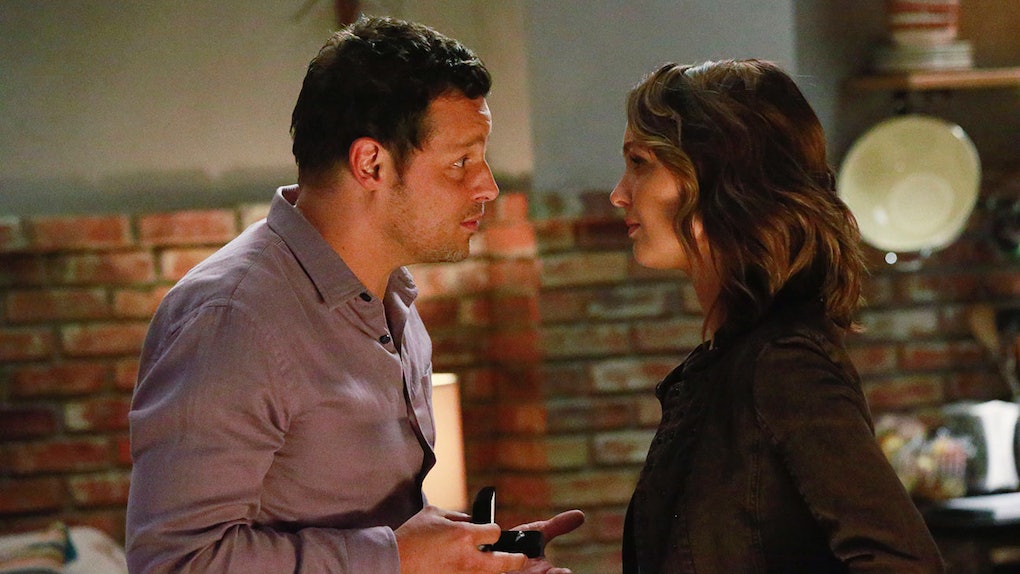 What better source for Halloween costume inspiration than Grey's Anatomy? Although most of the drama's couples have met traumatic ends rather than happily ever afters, Halloween is certainly the only time of year you and your person can pretend the plane crashes, shootings, and freak accidents of Grey's Anatomy were irrelevant and dress up as your favorite pair regardless of their history. With nearly 15 seasons' worth of characters to consider, you'll definitely want to consider these Grey's Anatomy couples Halloween costumes for your party look this year.

It definitely might feel a little weird to reenact the love stories of couples who have since broken up in a tense, deadly, or heartbreaking way, but no one exactly complains if your and your significant other dress up as Rose and Jack from Titanic, right? Despite whether or not they lasted, any Grey's Anatomy couple is up for Halloween interpretation, so brush up on your memory of the doctors' declarations of love and hunt down a surplus of scrubs and white coats. You're forgiven if your white coat includes a nod to a previous hospital name, because those are as susceptible to change as some of Grey Sloan Memorial's couples.

What pairing will be your couple goals this Halloween?

Definitely the show's golden couple, MerDer will play a major part in the legacy Grey's Anatomy leaves behind when it's finally off the air. Meredith's on the search for new love in Season 15, but no one can replace Derek in her heart or ours. Seeing as every couple on the show is mostly associated with their scrubs or white coats, you'll need to focus on personal details to make your specific pairing stick out. Including a Post-It note detailing Meredith and Derek's terms for marriage is ideal for making these longtime lovebirds come to life.

The intense drama surrounding this old-school pick was Grey's Anatomy in its prime. Unless you want to remind fellow party-goers about the ill-fated storyline of Denny's ghost, tracking down copies of Izzie and Denny's distinct outfits at the time of his death is your best bet for success. Hunt the racks for something similar to Izzie's hospital prom dress and dress up your partner in a dotted hospital gown to match Denny's heart transplant wardrobe. The perks of pretending to be a long-departed couple include breaking the fourth wall and asking other Grey's Anatomy fans what's been going on at the hospital lately. Because, y'know, these two missed a lot. Seattle Grace who?

Season 14 denied us of a Calzona reunion when Arizona moved to New York to be near Callie again, but somewhere these two are definitely cuddling over a slice of pizza. They don't exactly have highly recognizable outfits from their time on the show, so once you've found personalized white coats, dressing as Callie and Arizona could be fun if you're accompanying a little kid trick-or-treating. At a Halloween party thrown during Season 10, the couple's daughter Sofia dressed as a space princess. If you can convince the child in your life to copy that costume, your Calzona trio is complete.

Ah, here's to a potential couple still unaffected by Grey's Anatomy's inevitable tendency to screw up everyone's love and happiness. It's still a little early to predict where Schmitt and Dr. Nico Kim's alluded flirtation will lead, and we likely have to watch a few episodes focusing on Schmitt's sexuality before any real elements of a relationship emerge between them. But something tells me that the show won't harm these two anytime soon.

Wear blue scrubs to pull off Nico's confident stance and find a flannel shirt and particularly thick glasses to capture Schmitt's usual nervous persona. So far, their couple trademark appears to be Nico's winks, so experiment with those and quickly fill in anybody who asks if your date has an issue with his eye.

Since he's busy over at the neighboring Station 19, Ben hasn't popped up on Grey's Anatomy recently, but with Bailey now on sabbatical, these two ought to have some sweet married moments together soon. Now a firefighter, your Ben can don a fireman's jacket and hat at a Halloween party, while the Bailey of the two will stick to her sensible scrubs and white coat. Despite the recent drama that Ben's career move has caused them, he and Bailey are relatively happy and low-key compared to most of the show's couples. If you and your SO are the mom and dad of your friend group, these guys are for you.

Your mom or another older relative was definitely a super fan of Grey's Anatomy in the early years but then tapped out after a couple seasons of particularly wild high jinks. If this was the case, your family member was probably excited when you filled him or her in on Richard's second, much more stable marriage to Catherine. While Richard's go-to outfit is obviously his lab coat, Catherine is known for being stylish and composed, giving you some creativity in how to dress as the character.

R.I.P to one of the drama's more tragic couples and the reasons why the hospital underwent another name change. If you don't mind being a little melodramatic on Halloween, try emulating the pair's battered-looking outfits from the fatal plane crash that ultimately contributed to both Lexie and Mark's deaths. Like with Izzie and Denny, you can always lighten the meaning around your costume choice by asking fellow Grey's Anatomy fans what has happened since their characters left the series.

Jackson just left Maggie in the dust on the current season, and his coming to terms with April's sudden marriage and career change likely has something to do with his decision. Some fans just can't help but move on from some of their favorite TV romances, and if you'll defend Japril until your dying day, revisiting their elopement is perfect for Halloween. You'll get to rock April's dreamy wedding dress while your date can reenact Jackson's teary declaration of love toward her. Just make sure neither of you don't actually have other partners awkwardly watching the exchange from the sidelines.

Now the show's go-to cuddly couple, Alex and Jo finally tied the knot last season, kicking off Season 15's dedication to love for all. It can feel a little odd to rock a classic white dress on Halloween, but Jo's beachy wedding day look is too pretty to pass up. If he isn't on your arm, your Alex might seem out of place in his suit and tie, but the two of you together will hopefully put a smile on others' faces.

If there's anything Season 15 has reverberated, it's that Owen isn't the best at relationships. Before he was caught in a love triangle with Amelia and Teddy, Owen experienced quite the epic love story with Cristina, and some Grey's Anatomy fans still struggle in seeing him paired with other women onscreen. Seeing as Sandra Oh has met such well-deserved praise for her recent role in Killing Eve, dressing as Cristina and Owen feels timely this Halloween. Track down a ginger-haired wig to pull off Owen and prep a few of Cristina's most quotable lines to whip out on Oct. 31. Remember, he may still be on the show, but Owen is not the sun — Cristina totally is.

Good luck getting through Halloween without an emergency at Grey Sloan Memorial! Season 15 of Grey's Anatomy continues on Thursdays at 8 p.m. ET on ABC.

More like this
Is Meredith Actually Recovering On 'Grey's Anatomy'? She Finally Woke Up
By Abby Monteil
In 'Riverdale' Season 5, Toni Topaz Is The Black Superwoman Without A Cape
By Erika Hardison
Here's How To Vote For The Next 'American Horror Story' Theme Among 6 Options
By Cianna Garrison
Stay up to date