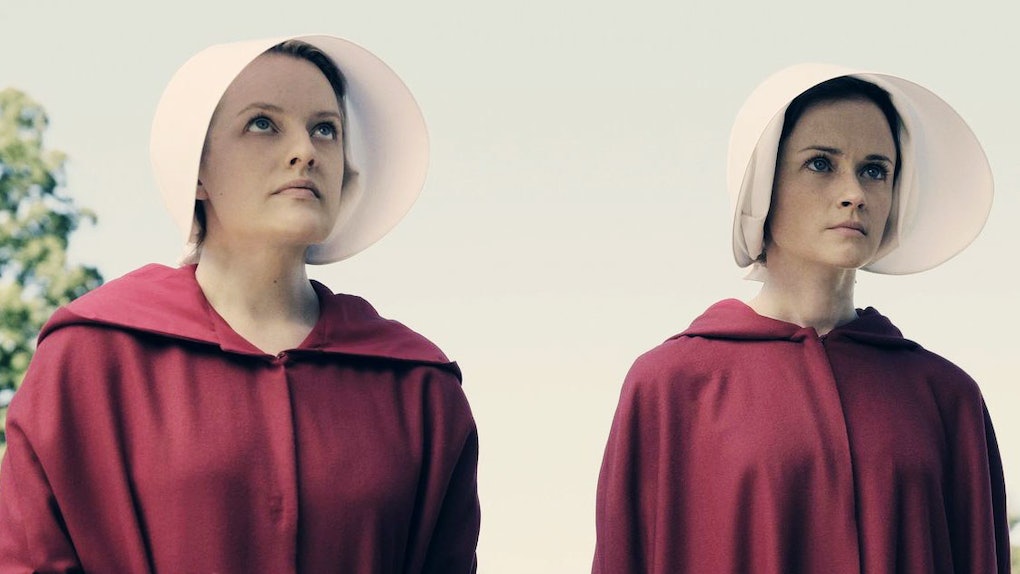 Blessed be Season 3 of The Handmaid's Tale, which premiered with its first three episodes on June 5. New episodes will now debut on Wednesdays on Hulu, but in the long dog days of summer, a week between episodes seems like an endless wait. If you want to settle into the dark mood the post-apocalyptic world of The Handmaid's Tale can create, these dystopian movies to watch while you wait for new Handmaid's Tale episodes may do the trick.

Originally based on Margaret Atwood's novel, The Handmaid's Tale explores a totalitarian world in which women are formal property of men and subjected to childbearing. The Hulu adaptation debuted at a timely moment in 2017, but it turns out that in 2019, the world has only become more chaotic and reminiscent of some of the extremities in The Handmaid's Tale's Gilead. If you're anxious for a new episode or in need of a break from some of the drama's very real moments, dystopian movies can provide insight into a harsh reality that reminds viewers that their world may not be so bad just yet.

Check out some of the recommendations below and remember to keep cool about the state of the world. Until your daily life starts to resemble one of these movies, you're probably safe for now.

Somewhat similar to The Handmaid's Tale, Children of Men explores a future in which female infertility has spiked. In the year 2027, the UK is now the only government just barely functioning as it oversees a wave of illegal immigration past its borders. Clive Owen's Theo must help a miraculously pregnant refugee reach safety, but the journey there won't be easy.

All these years later, has any dystopian movie remained as quotable as the first in the Hunger Games franchise? From shouting about mahogany to volunteering as tribute, the story has enough lighthearted moments to make up for the main story of the nation of Panem and its competition of children fighting against each other to the death. The following movies grow bleaker, as all franchise additions do, but The Hunger Games has an ideal mix of background, action, and emotion.

Starring Natalie Portman, V for Vendetta follows anarchist V (Hugo Weaving) as he attempts to set the UK aflame with revolution. Portman's Evey is increasingly embedded in his plot, but her traumatic childhood may make her more sympathetic for V's cause than the state's.

Sure, Chris Evans as Captain America is dreamy, but Evans in Snowpiercer is the revolutionist every dystopian writer wants their hero to be. As the last of humanity are ushered around a frozen world on a train, Evans' Curtis tries to lead the other lower-class passengers on the train in an uprising against the high-society folks in the train's front cars, which any fellow commuters could probably relate to somehow.

In addition to being the set on which eventual couple Ethan Hawke and Uma Thurman met, Gattaca presents the story of a society that continues thanks to people using genetic selection to create their children. Hawke's Vincent was conceived without this process, so he impersonates a man with ideal DNA in order to snag a coveted job at Gattaca. His true identity is at risk of being revealed when a high-profile administrator at Gattaca is murdered. Admittedly, any sci-fi movie made in the '90s looks hilariously dated now, but Gattaca's take on the future of genetics is definitely intriguing.

Mad Max: Fury Road takes place in a post-apocalyptic world where water is scarce, thus convincing Tom Hardy's surviving Max to partner with Charlize Theron's Imperator Furiosa. When Max joins her gang, the group has to escape a cult, traveling through the endless desert that the earth has become. If you'd rather watch a dystopian flick with more action than wallowing, this one's for you.

You probably read George Orwell's 1984 in high school, so if that English class unit didn't include watching the film adaptation, now's the time to check it out. Fittingly premiering in 1984, the movie follows protagonist Winston Smith as he struggles with society's gradual erasing of individualism. Fans of the Golden Age of Hollywood will also appreciate this as the final onscreen appearance of Richard Burton.

In 28 Days Later, society has collapsed as a result of a highly contagious virus that turns people into vicious, zombie-like beings. Having been in a coma when the illness spread, Cillian Murphy's Jim runs into a group of survivors who introduce a mission of reaching military protection. However, this support might not be as helpful as they thought it was.

In this, a virus meant to cure cancer has actually wiped out most of humanity, leaving behind Will Smith's John Neville. Haunted by the memory of his family's deaths, Neville occupies his time by searching for a cure to the virus, but other survivors soon come into his life, bringing with them rumors of a survivors' camp. There are a lot of dystopian stories focusing on government uprisings, but if a medically-induced apocalypse is more your speed, I Am Legend and 28 Days Later will both fit your cravings.

Looper is more of a sci-fi thriller than a straight-up dystopian story, but the right ingredients are there for it to still apply. In the year 2044, Joseph Gordon-Levitt plays a man hired to go back in time and kill targets. He then disposes of these bodies in the past, but he soon faces the possibility of having to kill his older self to close a potentially harmful time loop. The world also isn't completely bleak in this universe, which may make Looper more entertaining to watch than some other post-apocalyptic stories.

Praise be any movie marathons that are in your future!

More like this
Here's How To Watch 'Promising Young Woman' For Free If You're A College Student
By Ani Bundel
Kathryn Hahn Hopes To Explore Agatha's Backstory In Future Marvel Projects — EXCLUSIVE
By Dylan Kickham
'He's All That': Premiere Date, Cast, Trailer, Filming News, & More
By Dylan Kickham
Stay up to date