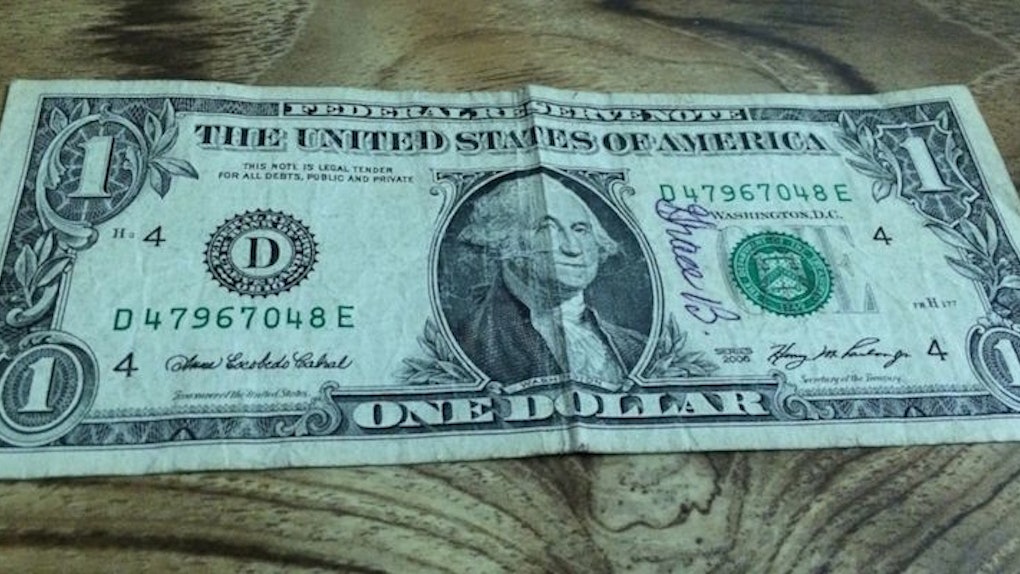 A widower recently reunited with a precious memento of his late wife he believed had been lost.

ABC News reports Peter Bilello, 86, was introduced to his wife, Grace, when he visited his mother in Italy at the age of 35.

The couple married 40 days later, and in September of 1964, they moved from Italy to Connecticut where they had two children.

Grace was diagnosed with cancer in 2001 and endured several years of chemotherapy and radiation.

Me and my wife were together all the time. She goes to chemo, I sit down next to her. And coming home, she lay down on the couch, she's very sick after the chemo and [I] do all the work in the house.

In 2009, Bilello decided he and Grace should create keepsakes of each other in the form of signed dollar bills.

He signed one "Peter B" while she signed the other "Grace B."

The two dollar bills stayed in Bilello's wallet until about five years ago.

By mistake I went shopping. I don't know where I used the [two dollar bills]. I came home and told my wife... 'Grace, I made a big mistake today... I'm never going to see [the dollars again].'

Grace died in November of 2014, the year the couple celebrated their 50th wedding anniversary.

Bilello remembers his wife as a "very good" wife, mother and cook.

Anything she said, I would take care. Doctors, hospitals. I was with my wife all the time.

Bilello took his granddaughter, Ashley, to lunch at a sandwich shop a few weeks ago.

He paid for the food and was shocked to find "Grace B" written on one of the bills he received as change.

A teary-eyed Bilello knew exactly what to do next.

I told my granddaughter, we're going to go straight to the cemetery, and tell nonna [grandmother in Italian], my wife, that we got the dollar back. I showed the dollar to my wife and said, 'Grace, look, I got your dollar back.'

He now keeps the dollar in a secure area.

Nobody's gonna get that dollar anymore. No way.

The widower suggested it was his wife's spirit that put him in the sandwich shop at that precise moment.