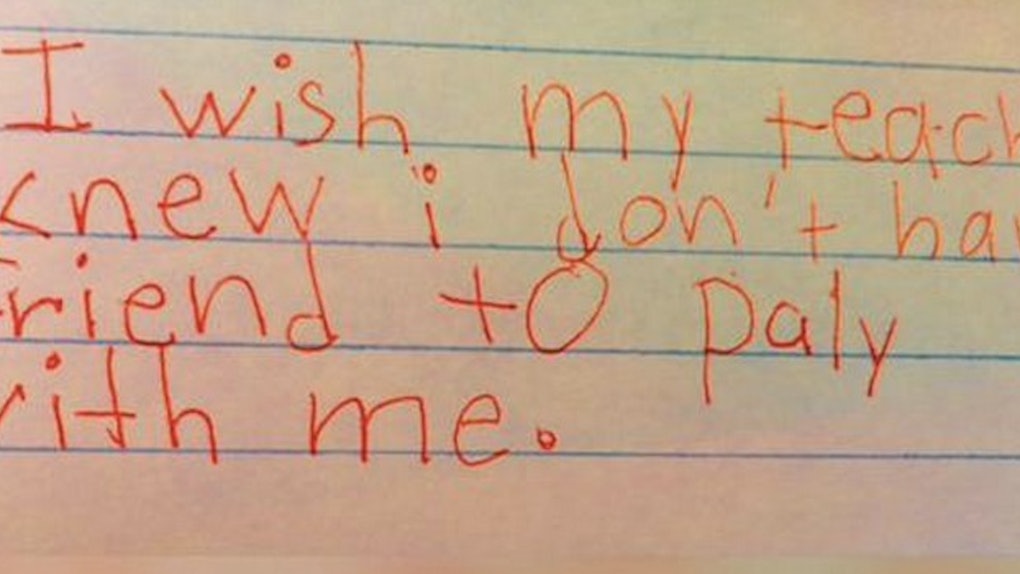 Teacher Shares The Heartbreaking Notes Written By Her Third-Graders (Photos)

A teacher who knows her students well can encourage a passion for learning and aid difficult situations as home.

Many children, however, don't know how to share their developmental hurdles with adults.

The Denver woman invited her students to write down what they wanted her to know about their private lives and submit it anonymously if they so chose.

Schwartz told ABC News 92 percent of the students enrolled at her school, Doull Elementary, rely on a subsidized lunch program for meals.

She began the project as a way to better understand the lives of the children she sees every day.

Schwartz later shared to Twitter under the tag #IWishMyTeacherKnew.

The interactive activity caught the attention of educators and parents for its simplicity.

Schwartz's initiative was so revealing it prompted other educators to follow her example,

#iwishmyteacherknew Vietnamese because then she can say words I forget pic.twitter.com/lEFdKxe136 — Kyle Schwartz (@kylemschwartz) April 6, 2015

The influential teacher told ABC News, "I think it caught on so fast because teachers are highly collaborative and freely share and explore resources."

"In the end, all teachers want to support their students..."

#IWishMyTeacherKnew how to do a backflip. Ss challenging me to learn new things. It's exciting! #ChallengeAccepted pic.twitter.com/O9q7ZSpdHZ — Cassie Norsworthy (@mrsnorsworthy) April 17, 2015

"#IWishMyTeacherKnew is a simple and powerful way to do that."

Childhood is a time for play and making friends, but kids with deeper issues need to have them addressed.

#IWishMyTeacherKnew opens up the most difficult subjects for discussion.