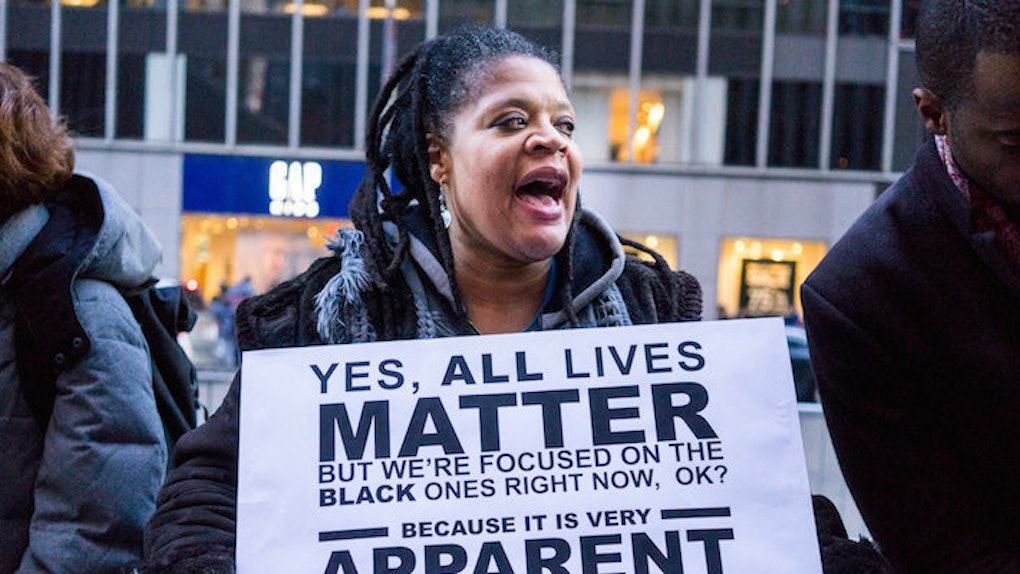 If there's one thing I can't stand about Internet discourse on social justice issues, it's that people who are completely unaware of the context of the world in which they live are allowed to have opinions about said world.

Certain conservative media outlets and ignorant masses have deemed the alleged murder of nine black people in the historically black South Carolina church by a 21-year-old white male as not a black-and-white problem or a race problem but as a "people problem."

Well, holy shit, it is a black and white problem. It is a race problem. Yes, there were guns involved, and it is certainly a gun problem, too. But it was motivated by race. The killer even said so.

America's race problem is so bad that even when a murderer says he killed people because of their race, we still have to tiptoe around it. — Elon James White (@elonjames) June 18, 2015

If you remove the specifics of the racially charged tragedy in South Carolina, you deny the struggles of less-privileged minority groups (blacks) at the mercy of more-privileged majority groups (whites). You diminish the very real effects of racism.

The problem with crying reverse discrimination

It's really irresponsible to ignore the involvement of race in the shooting in South Carolina. This shooting was not an isolated incident. Violence against black churches has happened many, many times before.

We don't exist in a vacuum in which all groups have equal power. Within every system -- from racism to sexism to classism to body-shaming to heteronormativity to religion and everything in between -- there's a privileged group and there's a disadvantaged group, with the former having all the power and the latter having none of it.

When whites commit crimes against blacks, it reflects an unfair system that's been in place for hundreds and hundreds of years that reminds blacks of their society-inflicted inferiority. It's discrimination.

In fact, when any privileged group uses their power to oppress any disadvantaged group, it's discrimination.

The opposite -- if a disadvantaged group acts against a privileged group -- is not "reverse discrimination." That's not discrimination at all. That's, like, an ego bruise.

Which is why reverse discrimination isn't real, ever.

Why "reverse racism," "reverse sexism" and "thin-shaming" are not real

Throughout American history, there have been national laws and systems, like slavery and Jim Crow, put in place specifically to systematically oppress black people.

These kinds of oppression still exist today in the form of systemic racism, which includes things like blacks having a significantly higher likelihood than whites of going to prison, the fact that unemployment rates for blacks is consistently twice as high as whites and that if you apply to a job with a "white" sounding name, you're over 50 percent more likely to get a callback than if you applied with a "black" sounding name.

And there's more. A hell of a lot more.

All of this systemic racism has continually pushed black people to a status that is "less than," which is something that has never happened to white people.

There has never, ever, ever been a national set of laws or system put in place to systematically oppress white people or push them to a status that is "less than."

You, white person, don't get to say racism exists against you because it doesn't exist against you. Sorry.

"I'm not saying that white people are better! I'm saying that being white is clearly better! Who can even argue?" -- Louis CK, dismantling the myth of meritocracy one joke at a time

This same logic also applies to other things that don't exist, like "reverse sexism" (sometimes called "misandry") and "thin-shaming."

Throughout American history, women have been similarly subjected to national laws and systems created to oppress them, such as the fact that until the 19th century, a woman did not exist as a separate entity from her father, brother or husband, and that until the 1920s, women were denied the right to vote, to get a divorce and own property.

From this came a deeply embedded system of systemic sexism that still exists today, which includes things like women being more likely than men to be victims of rape, sexual violence or stalking by an intimate partner, women constituting only 4.8 percent of CEO positions and women still making less money than men, among others.

All of this systemic sexism has continually pushed women, like blacks, to a status that is "less than," which is something that has never happened to men.

There has never, ever, ever been a national law or system put in place to systematically oppress men or push them to a lower status.

So, like "reverse racism," "misandry" can never truly exist.

When blacks are incarcerated, rendered jobless, unable to secure proper health care or become victims of violence, it confirms their lesser status. When these things happen to whites, it doesn't reflect a larger problem.

When women are objectified, raped, left out from job opportunities or make less money, it confirms their lesser status. When these things happen to men, it doesn't reflect a larger problem.

"Thin-shaming," the act of degrading a woman for being thin, can also be looked at this way.

The ideal female body has changed throughout history, but we can probably agree that it is the thinnest, least curvy, most long-legged it has ever been. It's the body we see plastered all over TV shows, movies, advertisements and more.

Thin people who have this ideal body can enjoy the privilege of seeing people just like them all over mass media, which confirms their status as ideal and worthy.

Overweight people, however, are hidden from the media, deeming their bodies unworthy of attention.

And even more than that, fat people don't get to enjoy all the things that thin people get to enjoy, such as finding their clothing size in any store, eating what they want without societal judgment and not having their size be the first thing someone notices about them.

Overweight people live in a society in which they are constantly reminded of their bodies and of the fact that their body gives them a lesser status. It reminds them of the clothes that didn't fit and the judgment they'll always receive when they eat what they please.

Meanwhile, shaming someone for being thin reminds them of, well, how thin they are. And of their higher status. Boo hoo.

Now, I'll address what you're probably thinking, which is something along the lines of, "But I, as a member of the majority group, have really felt discrimination! I swear! My feelings! They have been hurt!"

Yes, it's possible you, as a white person, or a man, or a thin person have felt like someone made you feel bad about yourself for the fact that you were any of those things. I'm not denying the very real problems you may have faced.

There's a crucial difference, however, between discrimination that happens on a systematic level and an individual level.

When blacks hate on whites or when women hate on men or when overweight people hate on thin people, it doesn't perpetuate a system that is already in place.

But when whites hate on blacks, when men hate on women or when thin people hate on overweight people, it does. It adds fuel to the systemic fire.

To pretend there is not a different, harsher meaning attached to discrimination against a member of any disadvantaged group is to deny everything about the reality of the world around you.

The best part is you can take any privileged group and any disadvantaged group within a system, apply all of the logic I presented in this article, and it will be true.

It's like Mad Libs, only instead of ending up with a funny story, you end up with a lot of violence and anger! Nice.

Not all hatred is created equally. Remember that.